My sister said to me, "I want to go driving, where shall we go?" I said I wanted to follow the Hudson's Bay Company's brigade trails -- and Alexander Caulfield Anderson's explorations -- around the province. That is exactly what we did. It's not hard to do. If you want to follow the fur trade around British Columbia, here's the route that worked for us.
If you are from the coast, begin with Fort Langley where the fur trade is celebrated all year around -- google the Fort Langley National Historic Site of Canada for more information. The town of Fort Langley is well worth a visit, too, especially if you are interested in antiques.
In Hope, visit the Hope Visitor Centre and Museum at 919 Water Avenue. Volunteers in Hope are opening up the 1849-and-later Hudson's Bay Company Brigade Trail across the Coquihalla range for hiking. The name of their organization is Hope Mountain Centre, and website address http://www.hopemountain.org/ -- on their website you will find information about the Hudson's Bay Company brigade trail project. 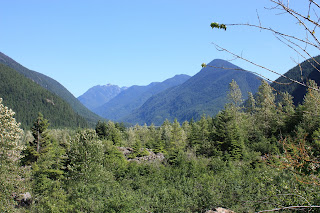 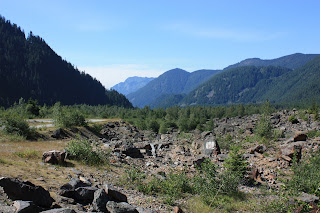 My sister and I then took an excursion to the east, not following the brigade trail but the track of Alexander Caulfield Anderson's 1846 exploration over the Coquihalla range to Kamloops. We paused at the Hope Slide, of course, and I have included photos of the valley that Anderson and his men walked up in the summer of 1846. The second is the view from the top of the Hope Slide west toward Hope along the Nicolum River valley; the first the view eastward up the Sumallo River valley, looking toward Manning Park.
This is not the view that Alexander Caulfield Anderson saw in 1846. More than 100 years after Anderson walked up this valley (January 1965) Mount Outram let loose an enormous landslide that fell into the valley of the Nicolum Creek and buried Outram Lake under 70-meters of rock and rubble. The landslide violently displaced the water and soft clay of the lake-bed, pushing it 30 metres up the side of the mountain opposite and knocking down all the trees. Four people died; two bodies still lie under the slide.
To the east of the Hope Slide lies Manning Park and our next stop -- Rhododendron Flats, where Alexander Caulfield Anderson began his climb to the top of the Coquihalla Range in 1846.
Posted by Nancy Marguerite Anderson at 7:45 PM