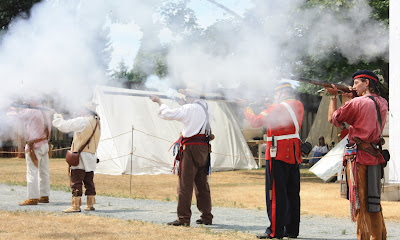 Alexander Caulfield Anderson loved his guns; when he joined the fur trade in 1831 he purchased the best flintlock gun he could find in London.
At York Factory in 1832, he purchased a pair of flintlock pistols.
At Fort Vancouver he met John McLoughlin's son in law, a man who was known to have been the best shot in the Columbia district.
In 1833, at Fort McLoughlin, Anderson had an opportunity to use his guns, and proved to be a good shot in a crisis.
Donald Manson had taken a tribal chief hostage and held him in the fort.
Naturally the fur traders expected trouble:

Anderson wrote: "Everything remained quiet and undisturbed for a few days, yet I could not but suspect the untoward tranqulity that reigned around. ... Evening came on, and the men asked permission to go outside for water.... I myself went out, having my pistols upon me, and leaving my other arms where they were easily accessible, for I had my misgivings, and they were very shortly realized.
"I advanced to the edge of the bank and was looking around when suddenly, within a few paces of me, I saw darting through the bushes a host of armed Indians. I turned at once, gave the alarm, and retreating to the fort was speedily prepared to defend the entrance."

There were a number of times when the fur traders needed to defend themselves when they were faced with a crowd of Natives.
One of these occasions occured when, in 1846: "We arrived up a camp of Indians; the inmates of which upon our approach rushed out tumultuously with their arms, yelling very vociferously."
The fur traders probably prepared their guns for firing, but waited for instruction from Anderson himself.
For reasons you will see below, no man wanted to be the first man to fire his gun!
What happened next is written in Anderson's journal:

"Judging, as it proved correctly, that their hostile demonstrations were not intentionally directed toward ourselves, I rode up and enquired their meaning. The tumult forthwith subsided; and the leader of the party, a one eyed blackguard who is known as the Batailleur, excused himself...."

Anderson, as leader of this 1846 exploring party, had to take control of the situation.
As leader of a party of men, he had to ensure that his men would follow him where he wanted them to go.
By stepping forward, Anderson showed his men that he was willing to take the same risks he asked them to take.
He also showed the Natives that he would not "show the white feather."
This expression may have been common in the fur trade, but comes directly from A.C.'s father in law, James Birnie.

The flintlock guns the fur traders carried needed to be cleaned, primed and loaded on a regular basis, especially when they were riding through a country inhabited by Natives who far outnumbered them.
Flintlocks got their name because they used flint, a hard, silicized-quartz found naturally almost everywhere and used for thousands of years to light fires.
The gun-owner knapped a small piece of flint from the larger stone, and inserted it into the gun where it would be driven by the force of the striker against the frizzen.
The flint was hard enough to knock a piece of steel off the frizzen and cause a spark, but the flint lost a bit of itself as well and would eventually need to be replaced.
The Natives used flints they picked up everywhere, but the fur traders imported the best flints from England (apparently from the base of the Dover cliffs.)

The flintlocks were all smooth-bored muzzle-loaders.
To load the gun, the fur trader poured black powder from his waterproof powder-horn into a measure he carried with him, and that might have formed a part of his powder-horn.
He poured the measure of gunpowder down the barrel of the firearm and, with a sharp tap of the gunstock on the ground, he forced the black powder into down the barrel to the lock where it would be ignited by the flash of the gunpowder in the pan.
Next the fur trader wrapped the ball in a piece of tallow-soaked cloth, and inserted ball and cloth into the mouth of the barrel.
He cut away the extra cloth with a knife he always carried with him, and removing the ramrod from the holder where it travelled as part of the gun, he rammed the ball all the way to the lock where the black powder lay.
But the gun was not yet ready to fire.

Next the fur trader primed his gun by tipping a little black powder into the pan of the gun and snapping the steel frizzen over it.
At this point, the gun was ready to fire, but would not until the hammer was fully cocked and released from its sprung position by a strong pull on the trigger.

These firearms were accurate, and at 80 yards the fur traders could put their shot into a target about the size of a saucer.
But once fired -- or if the gun misfired -- it took an experienced man twenty seconds to reload his gun with powder and ball and make it ready for the second shot.
In a confrontation with the Natives, the fur trader would always choose to negotiate, holding fire until it became absolutely necessary to shoot.

At Fort Alexandria, as elsewhere, the Natives traded for the same guns the furtraders carried.
However, the guns the furtraders sold to the Natives were not as well-built as their own guns.
The Natives' guns were always decorated with a brass serpent on the side, and a seated fox engraved on the back of the lock.
These animals had a spiritual signifancance for the Natives, who also believed that the symbols would bring them good luck in the hunt.

In December 1833 at Fort McLoughlin, Alexander Caulfield Anderson had test-fired the percussion gun that his new friend, William Tolmie, had brought with him from Scotland.
Years later he placed an order for his own percussion gun.
With the incoming 1846 brigade, Anderson received his new 23-gauge, double-barreled percussion gun with stout barrels, bullet moulds, nipple keys, and cleaning rods.
Until this time the only guns in New Caledonia were flintlocks, which used flint and steel to ignite gunpowder stored in the barrel of the gun.
In both flintlocks and percussion guns, the explosion of the gunpowder powered the bullet, but in the percussion gun the flint and steel was replaced with a nipple, cap, and tube.
The cap contained fulminate of mercury, an explosive chemical made of mercuty, nitric acid and alcohol.
The nipple accepted the cap, and the tube led the flame to the gunpowder in the barrel.

If you want to see these guns in action, attend one of the fur trade celebrations at Fort Langley, Fort Nisqually or any of the replica fur trade forts.
It is likely that they will have re-enactors who will demonstrate the guns and will answer any questions that you have.
It's a fun show.
I attended Fort Langley brigade days and watched the Victoria Voltigeurs demonstrate their guns.
This group of re-enactors travels all over, playing fur trader or free traders in all the replica forts in the area.
Posted by Nancy Marguerite Anderson at 6:46 AM