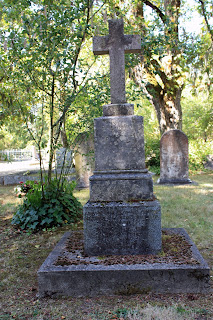 I was invited to speak at an event put on by St. Stephen's Trust Society, called "Exploring the Past."
St Stephens is the old church in Central Saanich, where my great-grandfather Alexander Caulfield Anderson is buried. [His worn tombstone is shown, above].
The St. Stephens Trust Society has been established to prevent the old church from being closed down, and so far they have been quite successful in this.

I was only one of the invited speakers, and my talk was about ten minutes long.
The evening began with a video of the retiring churchyard guide taking about some of the people who are buried in the churchyard, and telling his stories of what he knew about them.
Many of the people he spoke of were people he had known many years ago, and he told stories about them that no one else knew.
He also told us all that St. Stephens was a country church and that people from many denominations attended the church in its earlier years, before splitting off to build their own churches in the immediate neighbourhood.
I had never thought of St. Stephens Church in that way.

After the video ran, I was the next speaker, and I was followed by Diana Chown who talked about the neighboring Holy Trinity Graveyard.
Sylvia van Kirk was to close the evening but she had laryngitis, and so the president of the Old Cemetery Society rose to tell the crowd what that organization does in Victoria.
It was a thoroughly enjoyable evening, and there were lots of conversations after the night was done -- especially as Diana Chown talked about a few people who appeared in my book, The Pathfinder.

So anyway, here is what I had to say:

"Good evening, everyone, and welcome to the celebrations we are enjoying here tonight, as we say thank you to St. Stephens Church's resident story-teller.

"My name is Nancy Anderson, and I am the great grand-daughter of the fur trader and explorer, Alexander Caulfield Anderson, whose worn gravestone stands just outside the front door of St. Stephens Church.

"So -- who was Alexander Caulfield Anderson, you ask: and why is he important?

"He was the fur trader who, in 1846 and 1847, explored four routes across the range of mountains that separated the fort at Kamloops, from Fort Langley on the lower Fraser River.
"Those of you who have driven through British Columbia know that means he must have traversed the Coquihalla long before any roads existed there, or he walked around the range of mountains that loomed above Hell's Gate.

"In fact he did both -- on foot, and in later years on horseback, with the fur traders' brigades.
"His story is told in my book, The Pathfinder -- and from this book you will also come to understand how significant a figure he was in North and Central Saanich's early history.

"Stories are important, and they are how both family histories, and local histories, are saved.

"For example: you would probably not consider A. C. Anderson's wife, Betsy Birnie, a significant person -- but she was the probable mixed-blood grand-daughter of the voyageur Joseph Beaulieu, who crossed the Rocky Mountains with the North West Company's explorer David Thompson in 1807.
"But after I say something like this, I have to add the line: -- "Not that we can prove it!"

"And this is why stories must be told and retold and, also, written down. It is highly likely that our story is true but it wasn't written down, and so we can't prove it.
"We do, however, know, that Anderson's wife, Betsy, was born into the fur trade at Spokane House in 1822, shortly after her mother's marriage to fur trader James Birnie.

"So, Betsy grew up in the fur trade, and lived a fur trade life until she was forty years old -- she would not have fitted well into the lives of the English settlers who broke land in this valley.
"Still, when she died in March 1872, her funeral at St. Stephens was attended by the many friends of the Anderson family.

"And so the first generation of Andersons who came to early British Columbia are buried in this cemetery -- the next generation is represented here as well.
"The grave of Anderson's son, Walter Birnie Anderson (and his wife and daughter), stands only twenty feet away from A. C. Anderson's grave.

"Walter came to Saanich when he was about twelve years old, and he grew up on the Anderson farm on Wain Road.
"He eventually became one of the early British Columbia policemen, and served the force in Comox and Cumberland for many years.
"He returned to Victoria on his retirement, and when he died, he chose to be buried at St. Stephens.
"This was his home.

"The next two generations are also represented here, in two separate plots.
"The Harveys, who lived on Knapp Island, are descendants of A. C. Anderson's daughter Agnes, who was also born into the fur trade at Fort Colvile, near Spokane.
"Agnes was fortunate, and unlike her older brothers and sisters she adapted well to the civilization at early Fort Victoria.
"She married well, to Captain James Gaudin -- a rather famous man himself, and her grandchildren married into the Dunsmuirs of Nanaimo.
"Hence her family brings representatives of many prominent British Columbia families into St. Stephens Churchyard.

"The final Anderson family member buried here is my aunt, Claire.
"No one but my sister and I could have identified the infant buried in Walter Anderson's grave, and we only managed to do so because of our ancient mother's many stories about her older sister, Claire -- who she never knew! Claire died before my mother was even born.

"Both Claire and my mother, Marguerite Flora Anderson, were children of Alexander Caulfield Anderson's youngest son, born in Saanich in 1864.
"His name was Arthur, and he was less than twenty years old when his father died.
"He remained in Saanich for a few years before going to the Kootenays to log and mine.
"Eventually he returned home with money, and purchased a strip of land west and north of this church.
"If any of you live on Salmon Road or the tangle of roads in that immediate vicinity, you are living on Arthur Beattie Anderson's old property. [At that point a few people put up their hands; they lived there].

"Arthur sold off pieces of his land as his money ran out, and he also rowed across the inlet to work on the Malahat, which was then under construction.
"When he ran out of money in 1917 or so, he sold his last piece of property and moved to Valdez Island to raise sheep.
"Arthur eventually died in Duncan, where he is buried in an unmarked grave.

"But before Arthur left Saanich, he sold one piece of land to his father-in-law, Reverend Frederick Granville Christmas -- the man church members now know as "Father Christmas."
"This gives my family one more very strong connection to St. Stephens Church.

"As I have said, stories are important.
"Tonight we are celebrating the work your resident story teller has done in researching your stories and in bringing them to you.
"He might not have known all the Anderson family stories, but he would certainly have understood who Alexander Caulfield Anderson was!

"In the fall of 1861, Anderson was one of three men who cleared the land so that St. Stephens Church could be constructed the following spring.
"For this reason, if for no other, A. C. Anderson will remain a part of St. Stephens Church's long and wonderful history.
"Moreover, to members of the Anderson family, St. Stephens churchyard continues to hold an important place in our collective memories; it's a special place."

It's odd, but many people are afraid of public speaking -- and so was I when I first started.
I no longer am.
I have a few tricks that makes it all work for me, and for the all-important attendees.
I write my speech for the audience, and so each talk is aimed at the people I think will be attending -- casual for people who might not know who he is, and more detailed for people who are historians.
The Anderson Island people, for example, got to see all the family pictures that never made it into the book -- the image of the school Anderson attended, the maps of Australia and India and London. They also saw images of Fort Nisqually that no one else has seen.

I write my speech and print it out, double-spaced and in large letters. I also staple the pages together so I won't drop a page and lose track of where I am.
In this last talk, I hadn't printed the speech in large enough letters, so I found it harder to follow and, on one occasion, lost my place for a bit.
I time the speech with a timer when I am writing it, and stop a little short of the usual 45 minutes.
I re-read the talk a few times just before I am going to give it; that way I know the talk well enough that I can read, to remind myself, and look at the audience.
I pause at important places. People take in what you said in the pauses (so losing your place for a moment or two is not a bad thing as it gives people time to absorb what you just said).
I plan the pauses, and write them into my talk.
[Pause]
And most importantly: I eat a big pasta meal before every talk.
Pasta and other complex carbohydrates are very calming, and though I am nervous at the start, I am rarely if ever terribly nervous.

At the end of the talk I am willing to answer questions. I carry a "Need to know book" in which I have answers to the questions I might be asked.
At my first talk I was asked the size of A.C. Anderson 1867 map, and I gave the wrong answer.
Of course I should have gone to my book for the answer, but did not, and based my answer on my visualization of the smaller-sized scan I was more familiar with.
I also need to carry a family tree around with me, because someone will always ask about his children.

If you give talks you will begin to learn what works for you, and what you need to carry around with you.
I hope some of what I said has helped you.