The map below is a small portion of Alexander Caulfield Anderson's 1867 map of British Columbia, CM/F9 in the British Columbia Archives.
The full 6ft x 6ft map (which you will never be able to see) covers all of British Columbia and includes part of the United States (Fort Colvile area) and Alberta (Edmonton House).
In this small section of the big map, I have shown the lower Fraser River between Fort Hope and the mouth of the river itself.
If you look at the map carefully, you will notice many interesting and historical facts: the route of the Collins Telegraph Trail is shown as it travels through the Fraser Valley north of the river.
You can see the bottom of Harrison Lake and the mouth of the Harrison River, where the Fort Langley fur traders had their most important fishery.
To the east is the Chilahayook [Chilliwack] River, where Anderson's Sto:lo guide, chief Pahallak, lived.
Finally, at the bottom of this portion of his map he drew in the route of "Lacey's Trail of 1858," which followed the Lummi River north to the goldfields on the lower Fraser River.
Today, this muddy trail is known as the Whatcom Trail, and its name is commemorated up and down the Fraser River valley. 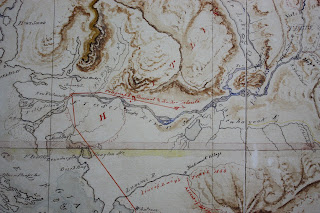 As I drive up and down the Fraser Valley I often notice these old names.
But one road sign I often noticed was "Sumas," and I had no idea where its name came from.
Then, as I looked at the details of the Fraser River on A. C Anderson's 1867 map, I suddenly understood the origin of the name.
Take a look at the large lake in the middle of the map, and notice that the fur traders, and Natives, called this lake "Smess."
That is what Sumas used  to be.
It is no longer.

"Smess" is a fur trade name, learned from the Natives who lived on what used to be Sumas Lake.
The water was drained from this eleven-thousand-acre lake by the Provincial Government, ninety years ago, to create the place we now call "Sumas Prairie."
But before the Government drained the lake, the Sumas Natives made their homes along its shores.
When the mosquitoes came in the June or July, the people moved into their summer homes built on stilts in the middle of their lake.
They travelled everywhere in their canoes; they fished for sturgeon in the lake and hunted waterfowl.
"There were millions of ducks, geese," a Sumas elder named Ray Silver said.
"The fish would jump right into your canoe there was so many of them, jumping all the time."
Ray Silver did not know the lake, but heard these stories from his grand-father, who had lived while the lake still belonged to the Sumas people.
His grandfather aso told him of the sturgeon left behind when the lake was drained, and how they suffocated and died in the mud.

The Sumas people moved away from their emptied lake and now live elsewhere in their territory.
Farmers moved in and ploughed the rich land created by the drained lake, sometimes turning up fresh-water clams as they did so.
Now "Smess" is filled with valuable dairy farms and agricultural land that produces thousands of pounds of fresh fruits and vegetables for market every year.
It's history has been drained away with the lake, and its original people have gone.
Even its name, Smess, was forgotten.

If you want to learn more about  what used to be Sumas Lake, the article I am getting the above information from appeared in the Vancouver Sun, April 26, 2013, and contains much more information than I am giving you here.

I don't know if Anderson was ever at Smess, but he paddled past the lake in his passages up and down the Fraser, many times.
He would also have obtained a map of sorts from his co-worker, Chief Trader James Murray Yale of Fort Langley, and so Anderson's map is probably fairly accurate in spite of the fact he was probably never there.
Smess was a place well known to the fur traders at Fort Langley, and there are a number of mentions of the place in fur trade records in the years after 1848.
James Douglas drove James Murray Yale crazy in those years, with his demands that Yale once again explore for a new trail that would bring the brigaders safely past the dangers of Manson's Mountain, on the Coquihalla Brigade Trail.
Poor Yale; he was so frustrated by Douglas' inability to envision the mountainous land that surrounded Fort Langley, that he complained to Governor Simpson that Douglas, who thought he was a fine geographer, was anything but.

For those of you who regularly read my posts and now expect me to write seven pages every week, you will be disappointed to find they are becoming shorter.
The reason for this: I am now beginning to write my second book and am still continuing the research on my third.
I have plenty of work to do, and so the blog posts must take up less time.
Do not lose hope: you will have plenty to read still.
Posted by Unknown at 10:28 AM