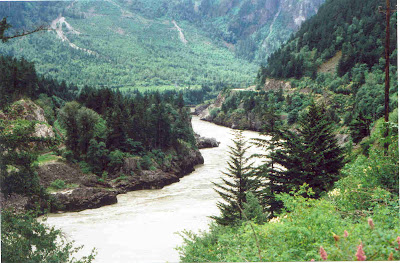 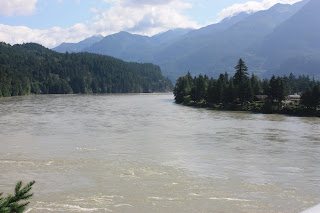 The first days of April 1847 were pleasant and warm, though snow still lay on the ground at Fort Alexandria, New Caledonia. On April 23, a man arrived at the fort with dispatches that instructed Anderson to explore for another route to Fort Langley from Kamloops -- this time through the rugged canyons and rapids of the Fraser River. This would be Alexander Caulfield Anderson's third and fourth exploration.
Anderson's party was not the first exploring party to follow the Fraser south to the ocean. In 1793, Alexander Mackenzie began his journey southward, but on the advice of the natives took the West Road River west. Fifteen years later, Simon Fraser and John Stuart explored the Fraser to its mouth and returned to New Caledonia, disappointed at its difficult course. In 1828, Governor Simpson descended the river from Kamloops with a few chief traders (James Murray Yale amongst them), and frightened themselves silly in the Fraser River canyons. 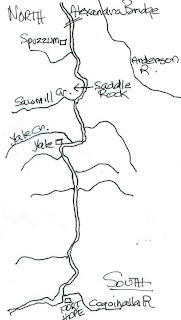 Now James Douglas and Peter Skene Ogden asked Anderson to explore a route through the Fraser canyons to Fort Langley. Yale, now Chief Trader at Fort Langley, knew that the natives travelled through the canyons regularly, and thought there must be a practical route. Anderson was expected to find it.
Pahallak, a native tribal chief from Chilliwack area, guided Anderson and his men downriver to Fort Langley by their native trails, some of which clung to the cliffsides above the Fraser River. Anderson knew that the brigaders could never use the cliff-side trails, but thought it possible they might be able to bring their boats upriver through the rapids. On June 1, 1847, Anderson set out from Fort Langley with his men and two canoes, to see if they could follow the river north to the native village of Spuzzum, on the banks of the Spuzzum River.
This series of photographs illustrates Anderson's journey up the Fraser River to the area around the modern-day Alexandra bridge, in the summer of 1847. The photograph at the top of the page shows the Fraser River north of Yale but south of Spuzzum. For the most part, this is what the Fraser River looked like to its early explorers -- a narrow, rugged and foaming river that twisted around rock faces and gave no safe footing on its banks. But south of Yale, the Fraser widened and slowed, and by the time it reached Hope it flowed smoothly but rapidly. In the second photo, we look upriver from the place where Fort Hope was later constructed on the river's east bank.
The photo below shows the Fraser River between Yale and Spuzzum, looking north toward Spuzzum. The next photo is of one of a few quiet spots in the river; the final photo in this cluster is of modern day Spuzzum, looking up the Fraser River toward the Alexandra bridge. 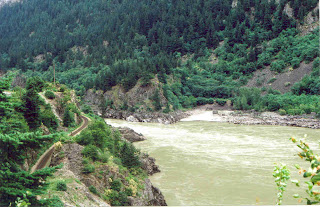 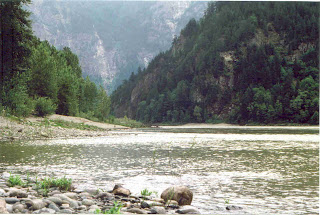 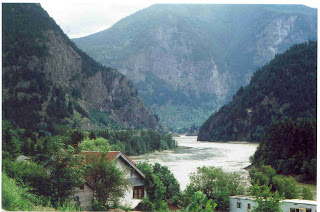 The next photographs are of the rapids that Anderson walked past coming downriver and going up. Anderson estimated the length of this difficult part of the river at 3 miles; obviously this is only a short section of that rapid-filled river.
At Yale, Anderson crossed the river from its west to east bank, and followed that bank upriver to the place where a cluster of oak trees stood, a little more than a mile north of the place where Fort Yale was later constructed. They crossed the river and dragged their boat up the Fraser's west bank through a set of rapids to another quiet patch of water. Again they crossed the river, and lined their boats up the river's east bank to the last set of rapids.

To this point, the explorers had a fairly untroubled journey upriver, and Anderson remained optimistic about the possiblity of success. But at the top of these rapids, trouble struck. As the steersman stepped out of the canoe, the strong river current caughts its bow and sheered the boat into the river's current. The rotten bow-line snapped, and the canoe plunged down the boiling rapids, carrying its lone native crewmember with it.

Fearing for their comrade's life, the natives shouted and took up their arms, but were quickly calmed by the Company men. The runaway canoe came to rest in an eddy at the bottom of the rapids, and natives and explorers alike rushed down the river bank to see if the bowman had survived his harrowing journey. The man was safe, but throughly frightened by his experience.

At this point, everyone sat down for an extended smoke and a parlay to settle their nerves. Then the natives carried the canoe upriver by an overland path which bypassed the rapids, while the Company men walked ahead with their axes, cutting the branches to clear their way. The difficult journey took five hours out of their day, but at last the two parties were reuinited at the head of the rapids.
On June 5, 1847, Anderson paid his native guides for their time, and the explorers paddled their Northwest canoe upriver, hugging the river banks to take advantage of the river's many eddies. At Kequeloose (a native village somewhere in the area of Alexandra Bridge) they hid the native canoe in the bushes for Pahallak to return to Fort Langley. Then Anderson distributed axes to all hands, and everyone chopped down trees to clear a new path that zig-zagged up the hill behind Kequeloose. This path became the route of the new brigade trail up the Anderson River to Nicola Valley.
The following photograph was taken just south of the Saddle Rock tunnel and shows the Fraser River as it flows south toward Yale. The final photograph of this series was taken at the upper end of the modern-day Alexandra bridge (the third bridge), and we can see the second bridge in the distance. 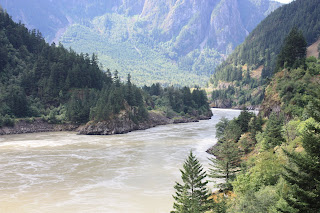 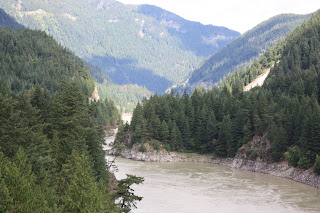 Posted by Nancy Marguerite Anderson at 9:35 AM