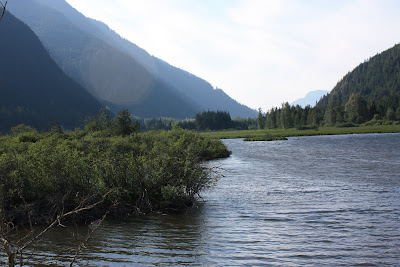 The Outram name appears in a number of places in British Columbia -- Mount Outram in the Coast Range and a mountain of the same name in the Rockies, and Outram Lake. Outram was an Anderson-Seton family name, but only one of these place-namings can be directly attributed to Alexander Caulfield Anderson. Sometime before 1867, Anderson named Outram Lake for his first cousin, General Sir James Outram, whose story appears below.
According to the B.C. Lands Dept. Hope-Princeton Sheet, 1939, the Nicolum River flowed west out of Outram Lake, a lake nestled close to the base of the mountain that loomed high above the valley floor that Anderson walked down in 1846. But according to Anderson's 1867 map of British Columbia, Anderson gave the Outram name to the second lake he came to as he explored this valley -- the lake at the head of the Sumallo River. This lake still exists, and its photograph is above. But today's Outram Lake has disappeared under the Hope Slide, buried under the tons of rock and rubble that fell down the side of Mount Outram in 1965. 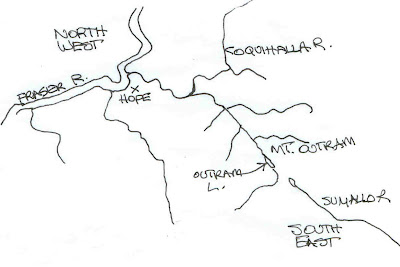 This is General Sir James Outram's story. Alexander Caulfield Anderson's cousin, James Outram, was born in 1803 and was much older than his many Anderson cousins. With the huge difference in age and situation, A.C. Anderson could hardly have known his cousin personally, but he knew who he was. In 1845, when A.C. Anderson first mentioned his cousin's exploits in a letter to Governor Simpson, Outram had already become famous in London and India.

James Outram was the 2nd son of Benjamin Outram and Margaret Anderson, daughter of Dr. James Anderson and Margaret Seton. Margaret Outram was an eccentric woman who accused both her Outram brother-in-law, and Alex Seton, her brother, of not supporting her family after her husband's early death. Both men had supported her family through many difficult years, and while Frances, her oldest son, recognized their support, James did not, and cut himself off from his Anderson family.

In 1819, James joined the East India Company's Bengal Army as ensign in the 4th Native Infantry, and sailed for India on the ship York. He arrived in August, and joined his regiment at Poona as a lieutenant in the 1st Grenadier Native Infantry. He was shortly transferred to the 12th Native Infantry and became acting adjutant in July, accompanying his regiment to Baroda. In December he became ill; in Feb. 1822 he rejoined his regiment but had a narrow escape when a native boat in which he was travelling was blown up by the fireworks that Outram carried with him. Outram was scorched about his face, but otherwise uninjured -- perhaps this is why he is always pictured with a heavy beard.

James Outram served his army in the native states of Kittur, and was sent with 200 men to seize the hill forts of Meywar and Joshpur. He served afterwards in Bhil, where he was entrusted with the duty of raising a light infantry corps under native commissioned and non-commissioned officers. (The East India Company's Army always had British officers and native soldiers, or sepoys.) The Bhils were a wild tribe considered robbers by the British, but Outram was successful in convincing many to join his Army. Natives often joined the Army to wear the bright red coats the soldiers wore, apparently, but the Bhils especially respected Outram for his courage, sportsmanship, and fearlessness in the face of danger.

In 1830, Outram set out to invade and subdue the Dang country and did so in a fortnight's time. In 1831 he was successful in stopping certain outrages committed in the districts of Yawal and Sauda. In 1833 he was promoted to Captain, and captured the Bhil rebel chief Hatnia. In 1836 the married his first cousin Margaret (sister of James Anderson B, HBC) but was obliged to hurry off to the Mahi Kanta on appointment as political agent. Outram's measures were violent, but the reproofs he received were softened by compliments on his military genius, energy and sound judgment.

Outram continued his work in the HEIC Army and remained successful in everything he did. In 1839 he made brevet major after a dangerous tour through Afghanistan when he delivered a dispatch from Afghanistan to the Governor of Bombay disguised as an Afghan and accompanied only by a private servant and two guides. In 1840, Outram was made political agent in the Lower Sindh, on the south banks of the Indus River in northern India near Afghanistan. A short time later he was granted the political agency of the Upper Sindh in addition to the Lower, and remained in charge there until 1842. The East India Company, a company that had started its life as a trading company similar to the Hudson's Bay Company, had long been unable to control its appetite for conquest. Sir Charles Napier determined to annex the Sindh and remove its princes from power, but Outram opposed the province's annexation. With the support of the British government, Napier wrested control of the Sindh from its princes and celebrated his victory with the pun, "I have sinned."

No political position survived for Outram afterward. He returned to England on furlough, and represented the princes of Sindh to the British government; the very public arguments between Outram and Napier raged in the London newspapers for years afterwards.

In 1844 Outram returned to India, and almost immediately helped put down one of India's many mutinys. In 1845 he was made Resident at Satara; in 1847 he was Resident at Baroda, the highest position under the Bombay government. Residents were part of the British system of ruling India, and Outram had a great deal of power in this last position. However Outram tried to put a stop to the corruption the British practiced and was removed from office. In 1856 he returned to England; in 1857 he was back in India and fighting the Persian war. Also in 1857 the king knighted Outram.

Shortly afterward the Indian Mutiny broke out. The mutineers massacred the British residents of the Residency of Cawnpore and besieged the Residency of Lucknow. With General Havelock, General Sir James Outram fought his way into the Lucknow Residency to relieve it from its siege, only to be besieged himself. The conditions that existed inside the Residency during its long siege were terrible, with dysentery and other diseases killing many of the men and women trapped there. The second relief came in October 1857, and Outram finally led everyone to the safety of Fort Alumbagh. But Outram's health began to fail, and he died in the south of France in 1863.

*
In 1846, Alexander Caulfield Anderson made two explorations across the mountains that separated Kamloops and Fort Langley, looking for a possible brigade trail. On his second exploration, he started from Fort Langley and followed the Coquihalla River toward the east. He and his men lunched on the banks of a river where the Coquihalla turned sharply northward, and another river -- the Nicolum -- flowed in from the southeast.

The explorers followed the course of the Nicolum River up its narrow valley, and Anderson saw that the river banks offered a soft surface for the horses' hooves. At that day's end, he expressed his optimism that this trail might become the new route into the interior. The explorers continued to follow the stream the following day, climbing over a height of land to arrive on the shore of a little lake nestled in a mountain valley. Here the country was fine and clear, with groves of large cedars and soft, mossy ground, and Anderson knew it would be a simple job to build a horse road through this open country. This is the lake that Anderson later named Outram Lake.

The Outram name was later transferred to the first lake Anderson had come to, and the mountain that loomed over it Mount Outram. The lakes remain unnamed in Anderson's journal of that time, nor do they appear on his 1858 map. But by the time he drew his 1867 map, Anderson had heard of his cousin's death, and named the second lake for General Sir James Outram.
Posted by Nancy Marguerite Anderson at 5:26 PM