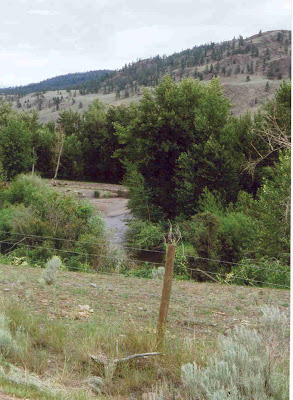 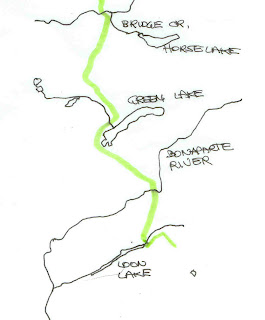 From Loon Lake, the brigaders rode northwest, crossing the range of hills that lay between them and their immediate destination, the Bonaparte River.
The photograph at the top of the page was taken in the Bonaparte River valley, and shows the range of hills that the men crossed as they rode north from Loon Lake.
The map to the right shows the route that the brigaders took once they left the north end of Loon Lake -- according to Alexander Caulfield Anderson's 1867 map, anyway.
The lake at the bottom right of the map is called "Hudson's Bay Lake."
I was unable to determine whether this lake is part of the Brigade Creek system shown on my posting of August 23, 2009 -- New Brigade Trail, Copper Creek to Loon Lake.
I think, however, these names give a pretty clear indication that the brigade trail did once follow the Brigade Creek system to Loon Lake. 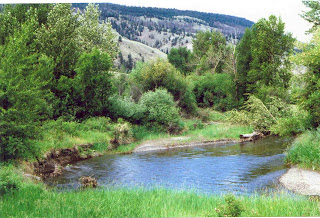 The photograph to the right is of the Bonaparte River, and it shows the range of hills the brigaders rode over to reach their next destination, Green Lake. 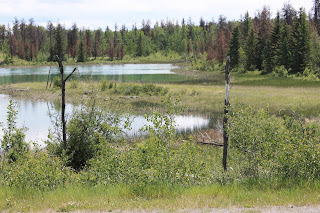 This photograph looks in the direction the brigaders came from, and they rode away from Green Lake to the left and behind the photographer.
At the place where a stream flowed from the west into the lake, they left the lake to ride along the stream's north bank, to the west.
Probably they then mounted an esker -- a gravelly ridge left behind by the glaciers -- and followed that esker as it lead toward the place where their path would join the old brigade trail west of Drowned Horse Lake. 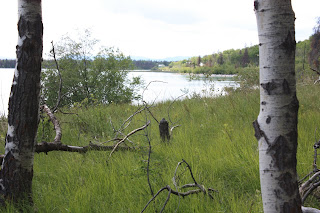 Anderson admired the beauty of Green Lake, and wrote of it in his draft unpublished manuscript, British Columbia: ".... Lac Vert, or Green Lake, so called from the sea-like tint of its waters. This lake, in length some thirty miles, is a beautiful sheet of water. Several streams run into it; but it has no free outlet. There is a slight subterranean drainage only, into the Bonaparte, a tributary of the Thompson. The water, therefore, kept within limits chiefly by evaporation, is brackish."

The photograph above is also of Green Lake, taken from half way up the lake's shore. You can see that we are now in aspen country. 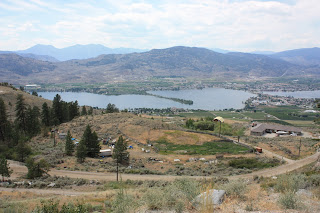 A little while ago I spoke of the furtraders following an esker from Green Lake toward Drowned Horse Lake.
The photograph to the left will show you what an esker is -- but this is a completely different part of the country than the Cariboo.
The narrow sandspit that runs across Osoyoos Lake, in the South Okanagan, is an esker -- the gravelly bed of the stream that once covered the lake that now exists here.
This esker, or sandbar, across Osoyoos Lake was used for thousands of years by the natives who lived here.
Later the fur traders crossed Osoyoos Lake by this natural bridge. In fact Anderson waded across the lake by this natural bridge many times as he brought his Fort Colvile brigade west to the foot of the Coquihalla range, after 1848.
Posted by Nancy Marguerite Anderson at 4:56 PM