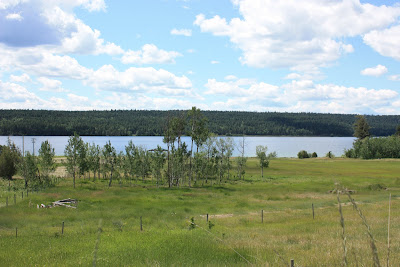 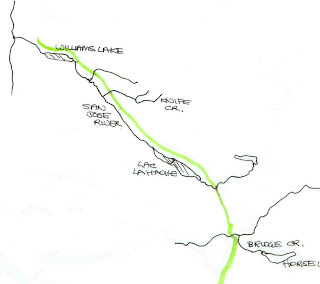 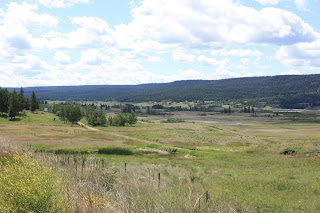 Above and to the left we have the San Jose river valley, which the fur traders followed west toward the Fraser River.
From early days in the fur trade the river carried this name, and it is still called that.
In both photos of the San Jose River valley we look east towards Lac la Hache. 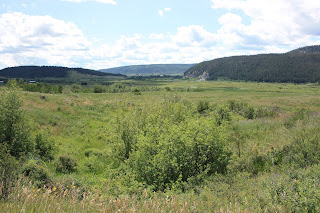 Both the old brigade trail over the Thompson's Plateau to the North Thompson River, and the new brigade trail through Green and Loon Lake, followed this stream valley from Lac la Hache to Fish Lake (modern-day Williams Lake). 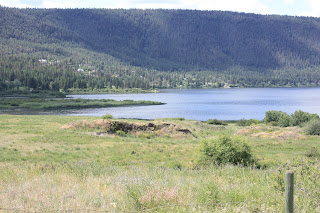 The photograph to the left shows the beautiful grasslands that lay at the north end of Williams Lake.
Anderson wrote of the area around Williams Lake in his unpublished manuscript "British Columbia," PABC:
"About Williams Lake, near Alexandria, the nature of the grass is different, but still very nutritive, and the vetch abounds throughout. In former years the Hudson's Bay Company's herd of horses, attached to Alexandria, amounting to upwards of three hundred, wintered constantly in this vicinity, under the care of the horse keeper and an Indian assistant." -- Fort Alexandria's horse-guard must have been close to modern-day Williams Lake. 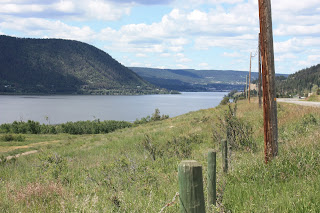 Anderson knew this lake by a number of names.

The early fur traders called this Fish Lake. In his later writings Anderson called it Lac de Colum-
en-let-sa -- the French Canadians' name for the lake, likely based on the natives' name.
We are standing on the north side of the lake and looking toward the west. This is the side of the lake that the brigaders travelled.

From the far end of the lake, Williams Creek flows to the Fraser River. For a few years the brigade trail did follow Williams Creek all the way to the river, but by the time Anderson left Fort Alexandria in 1848, the brigaders followed a shorter route north to Fort Alexandria.
This was the country Anderson loved. He reveled in the beauty of the open valleys that were divided from each other by ridges of land heavily timbered with Douglas and other firs.
Fine grasslands surrounded many of the lakes that lay along their route, and aspen and cottonwood grew in the streambeds.
In springtime -- the time the brigade rode away from Fort Alexandria toward Kamloops -- the white petals of the Mock Orange filled the air with their fragrance, and from every copse echoed the low drumming of the ruffed grouse.
Posted by Nancy Marguerite Anderson at 9:27 AM