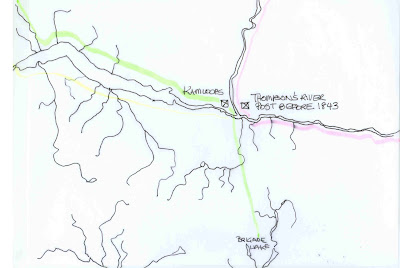 It does appear as though the old post at the Thompson's River was the centre of the fur traders' web -- and for many years it was.
Many famous men passed through this post, and a few famous women as well.
It is probable that the first fur trader who made his way from the North West Co.'s New Caledonia to the Columbia River came through the Kamloops area, though we don't know which trail he travelled to reach Kamloops.
It took the North West Company explorer John Stuart one summer to travel south from Stuart's Lake to the Columbia District, where he spent the winter.
Stuart wrote that he was "still in the Columbia in 1813 shortly after the purchase of Astoria from the Pacific Fur Company."

But Stuart was not the first to use this trail -- he writes that "in the summer of 1809, either Mr. David Thompson or Jacques Finlay, I am not certain which -- sent a party of four Indians from the Okanagan River to New Caledonia with a letter addressed to me. The letter was lost during the journey but the party arrived safe at Stuart's Lake where I was then stationed in the month of November."
He explains that one of these travellers was "another [female] who had been for some years resident at the Cote Establishments of the Flathead & Spokan posts as wife to Boisverd Mr. [David] Thompson's body servant -- I afterwards met her on the Okanagan River on my way to the Columbia in 1813 and being both [eccentric] & of [strong] disposition she was at the mouth of the Columbia when the Tonquin arrived there in 1811 & most useful to the newcomers."
This woman is mentioned in Jack Nisbet's "The Mapmaker's Eye; David Thompson on the Columbia Plateau," (Washington State UP., 2005), and was described by Thompson as a "little woman of masculine spirit." (see page 117).

The sources for the above John Stuart quotes comes from his "Notes, 1840," E.24/7, HBCA.
These notes were, I believe, part of a long letter addressed to Alexander Caulfield Anderson, and corrected some statements that Anderson made in his first unpublished manuscript, which he submitted to a London publisher in 1837 or so.
The manuscript was rejected by the publishers and returned to the HBC offices in London, where the then secretary (Webster) offered it to retired John Stuart to read.
Stuart addressed a letter to Anderson, which probably was returned to Anderson with the unpublished manuscript.
"I have no hesitation in saying that this narrative gives the best account of those parts to which it has reference, that is extant, or perhaps ever was written," John Stuart wrote to Anderson in 1842.
"That part of it which has come within the personal ken of the author itself, is forcibly & so far as I know, accurately described: -- and if in the other there are passages that may appear apocryphal, and without deteriorating from the whole, might be omitted, there is but one "Gulliverism" throughout -- and its greatest defect is that in delineating the character of the Natives, the dark only is dwelt upon. If they have their vices, they have their virtues also, and nowhere is the [benign] virtue of hospitality carried to a greater extent, than among the North American tribes -- one and all. As a whole it contains much useful, and in the most cases correct information -- that is not to be found anywhere else -- and is so creditable alike to the author, and to the Honourable Company in whose service he is engaged, that from my soul I wish it was published."
The source of this John Stuart quote comes from Anderson's "History of the Northwest Coast," Mss. 559, Box 2, File 3, B.C. McKelvie Typescript, BC Archives. [The original is in the Bancroft Library, Berkeley University, CA.]

Anderson was still a young man when he received Stuart's letter, and his reply was not as polite as it could have been.
"Really my good Mr. Stuart," he wrote, "much as I appreciate the commendations you have deigned to bestow my labours at large, I must yet dissent from your criticism upon several passages, not specifically indicated. There may be "aprocryphal" statements certain, but they are stated in a bona fide; and if in some cases I may have been misled, by information drawn occasionally, of necessity, from others."

[In fact, it is easy to tell that Anderson got most of the information contained in the manuscript from his father in law, James Birnie.
The men who Anderson describes in later pages of the manuscript are men who knew James Birnie long before Anderson ever set a foot in the Columbia district.]

This manuscript was returned to Alexander Caulfield Anderson, who edited it and sent it out again to be published.
But the original manuscript has been lost.
It probably appears, in pieces, in his later manuscripts.
But below I include a piece of writing that might have appeared in this first manuscript:
"Bye the bye: what be your notion of a Beaver-lodge? The question seems so simple that one feels almost disposed to apologize while putting it. Judging, however, from my own misconceptions of some years back, and again from the marvelous accounts one sees constantly blazoned to the World in print, it may not be amiss to dwell while on the subject. for instance, I very recently saw in a work, professedly for the instruction of youth, a plate, supposed to represent a group of Beaver-ledges. Nice little mud cottages with nearly rounded roofs, and accurately vaulted doors, seated on a pretty eminence and shared by palms and other trees of tropical vegetation. The following astounding revelation accompanies the print. ["This vignette represents the Beaver, with several huts of three stories hight, built on the edge of a clear stream, supported and shaded (!) by tall trees and brambles. The huts have usually two doors, one to the water, and one to the land."] And to complete the picture a veritable beaver, perhaps intended to represent the "oldest inhabitant," is gravely promenading in the foreground! What can our old and esteemed friend, the worth Mr. Wombwell, say after this? -- His vocation's gone, Hal, depend on'it; the philosophers have usurped it!"
The above quote comes from Anderson's unpublished manuscript, British Columbia, held in BC Archives, and Wombwell was the proprietor of a menagerie that existed in London when Anderson was a youth. The quote probably comes from Pickwick Papers; Anderson was a great fan of Dickens' writings.

Anderson met both Simon Fraser and his clerk, John Stuart -- Simon Fraser was retired at Lachine at the time Anderson was there (1831-2) and attended a few of the fur trade parties. John Stuart he met at the half-built stone fort that replaced the rotting Red River post, as he travelled west with the brigade in 1832. It is unlikely the two men ever spoke again. But this is my first in a series of articles about the famous men that are connected, somehow, with Alexander Caulfield Anderson, and in each of these articles we will be following Anderson's lost manuscripts around the continent. Let's hope we find one of them, so that it [or they] can be published as John Stuart wished!
Posted by Nancy Marguerite Anderson at 9:15 AM