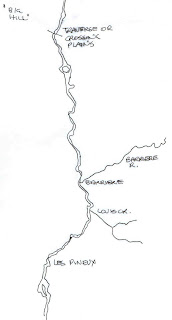 From the fur traders' traverse at Little Fort, the New Caledonia men remounted their horses and led their packhorses south, down the east bank of the North Thompson River toward the old Thompson's River post at the junction of the North and South Thompson Rivers.
The traverse was about forty miles north of the Thompson's River post, by their reckoning.
This was rough country, the most difficult leg of their voyage south. On both sides of the river the rocky banks cut right to the river edges in many places.
On occasion a horse would lose its footing and tumble down the cliffs into the river.
The men would rescue the valuable packs if they could, but many horses did not survive their falls.
It would have seemed easier to use canoes on this part of the river, but that was impractical
Firstly, this country did not grow the trees that provided the traditional trees for building the birch bark canoes that the fur traders were familiar with. 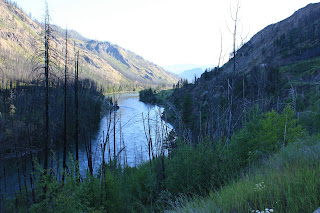 The Natives that lived around Kamloops and on the North Thompson River were Secwepemc.
The Secwepemc people preferred to travel by horseback and were, for the most part, unfamiliar with canoes.
Anderson said as much when wrote many years later that "these Indians principally do their travelling on horseback & have very little knowledge of the art of constructing canoes, the only use they ever make of them being just for the purpose of ferries where the water is too deep to ford." 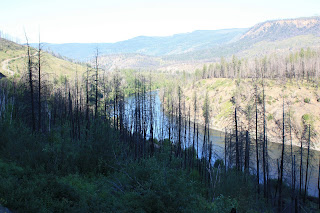 The two photographs I have displayed in this section are both taken just south of present day Louis Creek, on the east side of the river.
The photograph above looks north, toward the traverse at Little Fort.
The photograph to the left was taken at the same place but looks south, toward Kamloops.

You can see that the trees are blackened and burned, though there is plenty of new growth at their feet.

A few years ago our province was on fire, with enormous forest fires burning huge acreage of forest land. 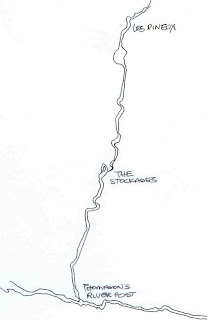 This was the famous or infamous "Barriere" fire, which burned down a town and its sawmill and destroyed a great deal of property.

The place-names listed on this map are taken from Anderson's 1867 map of British Columbia, and probably indicate stopping places on the brigades journey up and down the river.
Les Pineux might be "the Pines."
"Barriere" almost certainly got its name from a barriere or fish weir that always existed here.
"The Stockades" might have indicated a place where the Kamloops men kept their horses, but it seems a little distant from the fort.
It is more likely that this was another stop on the way upriver, and that the furtraders might have constructed a corral here.
I had assumed that Louis Creek got its name from a Native chief, but it seems that is not so.
There were two Louis' in this area when Anderson came as Dominion Commissioner of Indian Reserves, but one Louis (Petite Louis) lived in the Kamloops area, while the other lived on Shuswap Lake.
In 1877, the Native chief who occupied this land was named Andre, and it was he who accompanied Anderson and the other Commissioners over his land, riding all the way north to the old crossing place at Little Fort.
Posted by Nancy Marguerite Anderson at 10:04 AM