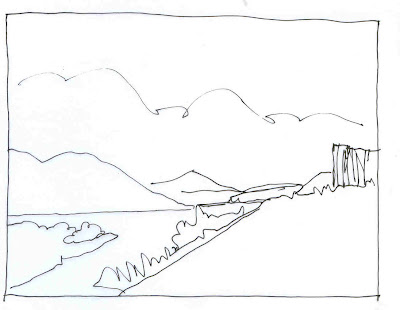 We are back at Fort Okanogan for a little bit -- I have discovered some new information and want to delve into it a little further, to see if anyone who reads this has information to share with me.
I have been looking for a photograph of the place where Fort Okanogan stood -- I knew I had it, but I have been unable to locate it.
I found it today -- by accident -- in a newspaper article printed in the Daily Colonist (our Victoria newspaper) on Sunday, March 7, 1976.
The article begins with a photograph of the Okanogan River where it mingles with the Columbia, and the caption says that the old fort was at the top of the hill to the right.
The photograph won't reproduce, of course, and I can't reproduce it without infringing on copyright, but I have drawn a rough outline of the photograph and put it at the top of the page.
By the way, those high "hilltops" are clouds -- not mountains. This is not a mountainous country.
I think we are looking up the Okanagan/Okanogan river toward Osoyoos Lake, and the two branches of the Columbia lead off to the right and the bottom of the drawing.
Is this statement correct?
Now I need to find the original photograph, hopefully in an archives somewhere.

The author of the article, called "Fort Okanogan: Where the Fur Brigade Train began," is Eric Sismey.
Apparently Mr. Sismey was born in Halifax but educated in England, Tasmania, and New Zealand.
He returned to Canada in 1911 but spent his working life in California.
It was not until he retired that he returned to British Columbia and followed up on his apparently strong interest in natural history and Okanagan history.
He belonged to the Sierra Club and numerous other Okanagan clubs, and for a few years (1971-3) was editor of the Okanagan Historical Society Journals.
And he had a large collection of photographs of the area around Fort Okanogan, taken both before and after the water behind the Wells Dam on the Columbia River drowned the location of the fort.
Where are his photographs?

His papers and articles are collected in the Penticton (R.N.Atkinson) Museum and Archives, Penticton, B.C., but I don't think his photographs are there.
I don't think they are in the BC Archives (but haven't really looked yet).
These photos would be of great interest to fur trade historians, especially those in the United States.
If anyone knows where they are, please share this information with us.

Mr. Sismey begins his "Fort Okanogan" article with the phrase: "When the water behind Wells Dam on the Columbia River, a dozen or so miles south of Brewster, WA., on Highway 97, rose to spillway level, it drowned for all time an intimate chapter of British Columbia history."
I believe that in an earlier posting I put Fort Okanogan behind the wrong dam, and hope this corrects that mis-statement.
He continues, "The word 'intimate' is used intentionally. While the site of old Fort Okanogan is now in United States, it was from 1812 to 1846, in a country dominated by British interests, first by the North West Company and then by Hudson's Bay.
"...the Fur Brigade trail stretched 491 miles through the Okanogan, along the west side of Okanagan Lake, to Kamloops, to Fort Alexandria.
"At Fort Alexandria a water trail began and it was still another 236 miles to Fort St. James.
"Returning fur Brigades collected the furs from all New Caledonia [and] carried them to Fort Okanogan where they were boated 433 miles down river to Fort Vancouver."

David Thompson was "the first white man to gaze along the wide river on a brilliant summer day in July 1811.
"He learned the river flowing from the north to join the Columbia was named Okanogan and where the waters mingled was St'lakam."

The American fur trader David Stuart followed David Thompson upriver from Astoria, with instructions to examine the country with a view to finding a location suitable for a trading post.
"Allowing Thompson to hurry Stuart travelled slowly until he reached a broad treeless plain which he described as follows: "The plain was rich in tall grass, the landscape open to the southeast but closed with pine toward the north.
""It was fragrant with flowers and musical with birds: and through it, down from the north, came a clear cold stream which natives called the Okanogan which mingled its waters with the Columbia."
"It was here that Stuart decided to build his fort," Sismey wrote.

The historian Bancroft said that "Few spots in the northwest could have been more favorable for the location of a factory."
It had a warm climate, friendly Natives with many horses, fish and game, and natural highways that led in all directions.
Drift timber caught in the bend of the river allowed Stuart to build his fort at the top of an easily defended sandy bluff.

When Governor Simpson arrived at Fort Okanogan in 1841, he found that because of the sterile soil that surrounded the post the farm was located a few miles distant.
Does the point of land on which this post stands have sandy soil?
Eric Sismey says the farm was located "close to where Father de Rouge built a mission and where some 300 Indians lived in 1888."
In the Okanogan tongue, this place was called Ellisforde-Schalkees.
Does anyone know where that place is?

Just so you know: I am slowing down a little bit on this blog because I have so much work to do to get this manuscript ready for publishing.
Please be patient with me -- I will keep in touch.
This is an unofficial announcement -- The book will be published in Fall, 2011, if I can get the work done in time.
The working title is: "A Fish out of Water; Alexander Caulfield Anderson's Journey through British Columbia's history."
But in the year before it is published, its name might change.
Posted by Nancy Marguerite Anderson at 3:32 PM