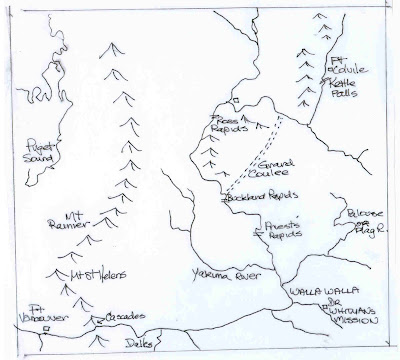 I am going to play around with the Grand Coulee for a while, discovering its exact location and learning the various fur traders' views of this spectacular place.
The outgoing brigade of 1840 would not pass through this gully; instead they loaded their furs into the Fort Okanogan boats and travelled downriver to Fort Vancouver.
But on their return journey, the gentlemen left the boats at Fort Nez Perce (Walla Walla), and attended the horse races at the Native village outside the post.
A horse cost a blanket, and as there was always a shortage of brigade horses in New Caledonia, the gentleman-in-charge traded for as many animals as he could afford.
Then, while the voyageurs worked their way upriver in the boats, the gentlemen herded the unbroken horses up the east bank of the Columbia River.
The horse trail between Fort Nez Perce and Fort Okanogan passed Priest's Rapids and entered red-rocked Grande Coulee, "an extraordinary ravine, the origin of which has been a matter of much speculation..." Anderson wrote.
"The bottom of this ravine is very smooth, and affords excellent traveling; good encampments are found at regular intervals.
"After following it for about sixty miles, the trail strokes off for the Columbia, at a point a few miles beyond a small lake, called by the voyageurs, Le Lac a L'Eau Bleue."
Anderson notes that "It is necessary to encamp at this lake.
"There is a small stream twenty-five miles or so before reaching the lake, which is another regular encampment; and again another streamlet about thirty miles short of that last mentioned, where it would likewise be necessary to encamp.
"This would be the first encampment in the Grande Coulee after leaving the Columbia..I cannot recall any encamping grounds, other than these three, in this portion of the road."
Anderson travelled through this coulee at least twice, so his description as given in his published book, "Handbook and Map to the Gold Region of Frazer's and Thompson's River," is important -- Grande Coulee now lies under the water of the massive Franklin Delano Roosevelt Lake, constructed between 1933-1942.
Or so I thought -- read on.

This is what "Frommer's Guide to Washington State" says about modern-day Grand Coulee dam area:
"Grand Coulee, formerly a wide, dry valley, is a geological anomaly left over from the last Ice Age.
"At that time, a glacier dammed an upstream tributary of the Columbia River and formed a huge lake in what is today Montana.
"When this prehistoric lake burst through its ice dam, massive floods poured down from the Rocky Mountains.
"So great was the volume of water that the Columbia River overflowed its normal channel and, as these flood waters flowed southward, they carved deep valleys into the basalt landscape of central Washington.
"As the floodwaters reached the Cascade Range, they were forced together into one great torrent that was so powerful it scoured out the Columbia gorge, carving cliffs and leaving us with today's beautiful waterfalls.
"With the end of the Ice Age, however, the Columbia returned to its original channel and the temporary flood channels were left high and dry.
"Early French explorers called these dry channels coulees, and the largest of them all was Grand Coulee, which is 50 miles long, between 2 miles and 5 miles wide, and 1,000 feet deep."

As stated above, the fur traders left the Columbia River at Priest's Rapids, and travelled overland to enter the Grand Coulee and follow it north.
This coulee cannot have been a sort of "tunnel" or canyon that led the fur traders north from one end to the other -- the southern portion of the coulee at least must have had breaks in the walls that allowed horsemen to take various routes up and down portions of the trail.

The above map is copied from a map I have in my possession, a copy of which is found in the British Columbia Archives, no. CM/13696C.
It is the Map of Oregon & Upper California, 1848, from the surveys of John Charles Fremont and other authorities; drawn by Charles Preuss and lithograhed by E. Weber & Co., Baltimore.
My notes say it was published by Samuel Augustus Mitchell in Philadelphia in 1848, but that is not mentioned on the map so I might be in error.
This spectacular black and white map shows the Grand Coulee running northeast from the banks of the Columbia River at Buckland Rapids, somewhere north of Priest's rapids.
The coulee cuts off one of the big bends of the Columbia River and again reaches the banks of the river some miles east of Fort Okanogan.
A photograph in William Layman's book, "River of Memory; the Everlasting Columbia," shows that the coulee did, in fact, reach the banks of the Columbia River.
If you obtain the book, see the photograph on page 74 -- it was taken by Asahel Curtis about 1930, and is storied in the Washington State Historical Society Archives under number 34632.
I assume this is the lower end of the coulee (at Buckland Rapids), but the author does not say.

This book has another photograph of the Grand Coulee, taken by the same photographer about the same time. (Photograph also stored at WSHS, No. 34610.)
It is on page 75 of Layman's book, "River of Memory," and shows the straight sided walls of the coulee and its flat, wide floor.
The author tells us that the coulee is 596 miles from the Pacific Ocean, and 647 miles from the river's source in British Columbia.
I recommend this book to people who want to see what the Columbia River used to look like; I purchased it a few years ago in Spokane, but have since found it in British Columbia book stores.
Our fur trade ancestors all travelled the Columbia River at some point in their careers.
But little of the river remains the way it was when our ancestors travelled it.
This collection of photographs might be the only resource we have when we need to describe the river our ancestors travelled.
Posted by Nancy Marguerite Anderson at 4:39 AM