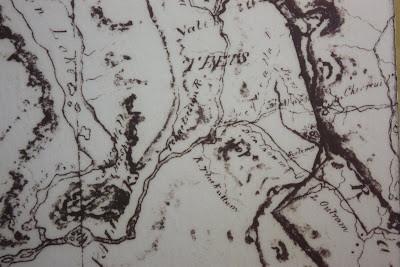 You are probably not going to hear from me next week!
I am taking a hike up a spectacular section of the historic Hudson's Bay Company Brigade Trail, behind Hope.
This organized hike is taking place through the Hope Mountain Centre for Outdoor Learning, and they hiked the 12-km section from Jacobson Lake to Sowaqua Creek last year.
This year I am joining them to hike a much shorter piece of trail, "but one with rewarding views and a colourful history."
The hike will begin on the west side of Sowaqua Creek valley, and climb a steep trail through old-growth forests to "Fools Pass" and Manson's Ridge.
We can take in views west to Fort Hope and east to Mount Davis and the Tulameen plateau.
The literature doesn't tell me whether or not we can look down the Nicolum and Sumallo River valley and it is likely we can't.
This is a relatively short hike: 5 kilometers (2.5km. up and 2.5 km. down).
But the elevation gain is 500 metres!
Everyone on the hike must be in moderately good physical shape and able-bodied -- no weak knees allowed!
The trail is very steep in places and hiking poles are recommended.
The hike takes place on Saturday, August 27, and there still seems to be room if you feel like joining in.
Contact the organizers through their website, Hope Mountain Centre for Outdoor learning, or email them at info@hopemountain.org
Telephone: 604-869-1274.

The map above is a small piece of A.C. Anderson's 1867 map of British Columbia, CM/F9, BCA -- a black and white copy which I inherited from my uncle.
I have the colour version, but it is in Vancouver with the illustrator who is designing the book.
This above piece of map will show, to the right hand side, a little piece of the trail we are hiking.
It is the most difficult part of the brigade trail, probably, and the piece of trail that caused the fur traders the most stress.
In the days when Alexander Caulfield Anderson rode over the trail, no one seemed to complain about the loss of horses as they pushed them off the edge of Manson Ridge.
One early writer (I think Susan Allison) described how the horses were herded off the ridge and down the steep trail.
Those horses familiar with the trail made it to the bottom, while newcomers fell and broke their legs or were killed.
There were always complaints from the interior of the shortage of horses -- perhaps that is why.

On the 12th of April 1854, James Douglas wrote to Donald Manson at Fort St. James: "You also refer to the subject of the transport horses, a certainly endless theme, and one which I did not expect to hear renewed after the great trouble and expense we have had in providing the large supply of horses, no less than 63 sent into New Caledonia last year....
"The loss of horses in the interior for these last few years has been a subject of remark throughout the country and there is a very general impression that the New Caledonia horses are both overloaded and neglected on the journey."

In Douglas' letters there are clues that the fur traders have begun to look for a new trail that would avoid Manson's Ridge.
On August 1st 1854 Douglas wrote to Paul Fraser, at Kamloops: "I am happy to hear that there is a prospect of finding a better road than the present one through Manson's Mountain, and I trust you have succeeded with Mr. Manson's assistance in getting it opened for the passage of the brigades."
In this letter there is no clue as to where the new road lay, but it appears they would try to follow a trail that led them through "a depression in the mountains leading direct to Fraser's River a little below the junctions of Harrison's River where where there is an extensive range of alluvial plains capable of maintaining the brigade horses for any desirable length of time."
A later letter tells us that the trail actually ended up on the other side of the Fraser River opposite the mouths of Harrison River, and it appears they planned to come down the Chilliwack River.
To Manson, Dougals wrote: "Your remarks in respect to the difficulties of the Fort Hope route are I admit well grounded and I think [when] the other route by the Chilwaywook valley is rendered passable the better for all accounts agree in representing it as free from most of the defects of the other road."
By August 1855, Gavin Hamilton "who was employed with a party of two men and Indians, in exploring the route to the Interior, by the Chilwayook valley has completed that service, and reports very favouably of that line of road..."
"It therefore possesses great advantages over the Fort Hope road, and entirely avoids the Mountain barrier which forms the principal difficulty of that route."
But Gavin Hamilton was probably new to the fur trade and did not understand the requirements of a brigade trail.
Within a year or two that trail remained unfinished and, as it was discovered it was too difficult to travel, abandoned.

That wasn't the only exploration going on.
On September 23 1856, Douglas wrote: "Your account of that road as gathered from Indian reports is far more favourable than the description given of it by Lolo, who does not appear to think it at all better than the present route."
This was a new trail from Fort Hope by the Coquihalla River, and it probably ascended the mountain by either Sowaqua, or Dewdney Creek.
A trail up Dewdney Creek would avoid Manson Ridge, probably, but one up Sowaqua Creek would not.
Whichever trail the furtraders were exploring was abandoned when Jean Baptiste Lolo reported that the northern trail was not better than the well used trail up Peers Creek.
After that time there is little mention of the route of the trail, and I presume that the brigaders continued on the old trail down Manson Mountain.
And this is the trail that I will be exploring on Saturday, August 27th.

Posted by Nancy Marguerite Anderson at 9:11 AM