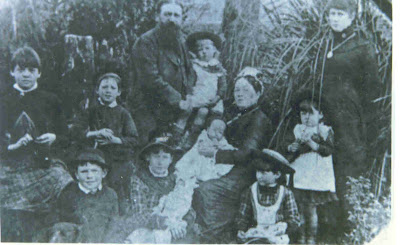 When Alexander Caulfield Anderson rode out of New Caledonia over the old brigade trail in 1840, he also travelled with his wife and one child.
Eliza Charlotte had been born at Fort St. James, Stuart's Lake, on March 10, 1839.
She would be baptized at Fort Vancouver by the Rev'd Daniel Lee, in July 1840.
We have pictures of her childhood from her younger brother's memoirs -- the following took place at Fort Alexandria after his father returned to New Caledonia in 1842.
"Once my sister, two years my senior, and I accompanied our father a short distance on foot, he then directed us to the return to the fort, entrusting me with his huge hunting knife," James wrote.
He may have been about six years old, his sister eight.
"All went well for a time, but in going through a wood of poplars we somehow missed the trail and thereupon my sister set up a howl of despair saying we were lost and should be killed by the Indians.
"I felt that being the man and having been entrusted with the knife it was my place, scared as I mayself was, to take the lead and to ensure my sister that I knew perfectly well where we were, albeit not feeling at all sure of my position.
"However, I found the trail all right and got home safely, must to my self-satisfaction and my sister's joy."

From the same Memoirs, James tells of the journey from Fort Alexandria to Kamloops in spring 1848, when his father was being transferred to the charge of Fort Colvile:
"My sister and I rode our own horses besides Mr. [Donald] Manson's eldest daughter; my brother Harry, two years younger, also rode alone, but firmly strapped to the saddle, he being but five years old and personally attended by Tout Laid, the native of ugly countenance previously referred to.
"Now Tout Laid in his imperfect French jargon would every now and then, when he thought occasion demanded it, caution Harry in the following terms, "Tiens bien toujours mon Harry," pronounced in his patois "Cha ban toujours mon Hallie" and Harry, always short of temper, would turn upon Tout Laid and say "Tais toi donc Tout Laid."
I think the last phrase means, "shut your mouth."
Tout Laid [All Ugly] was a Ta-Cully Native who worked at Fort Alexandria and often babysat Anderson's children.

On his return from taking out the brigade, Anderson led his family to Fort Colvile, on the Columbia River to the southeast of Okanagan Lake.
In 1850, when a school was established inside Fort Victoria, Anderson sent his two eldest children -- Eliza and James -- by the brigade trail to Fort Hope and Fort Victoria.
At Fort Langley, James Douglas took charge of the children and they travelled by canoe to Fort Victoria.
He wrote to Anderson about the trip, in a letter dated 28th October, 1850:
"I have no doubt you are anxious about your dear little ones whom you resigned to my care with so much reluctance last summer, and I regret that there has been no opportunity of communicating with you before now.
"I am happy to say that they are both well and decided favourites with the Staines [the schoolteachers].
"They were a good deal affected on leaving you but strove to hide their grief from me by conversation and the novelty of travelling over a country they had never before seen, their attention was attracted to other objects and their thoughts diverted from scenes of home...
"They remained with me until accommodations were provided for them in school and I believe it was not until they were finally separated from my family that they felt the bitterness of parting.
"The next time I saw Eliza was in school and she could not refrain from shedding tears."

"What funny looking guys we must have been in our odd make-shift of costumes," James wrote of their arrival at Fort Victoria.
"When my sister appeared on the scene, she was costumed in a print gown which, as nearly as I can remember, was made like a bag with holes for the head and arms and tied round the waist; moccasins and a poke bonnet like a coal scuttle.
"These were all pronounced by the [James] Douglas girls as being quite out of fashion and a gown, or as we were told to call it, a dress, was made with a point in front and small straw bonnet obtained from the Sale shop.

From: Lugrin's "Pioneer Women of Vancouver Island":
"Shortly after Mrs. Staines had taken up her residence and started to teach the small children of the colony, a little girl came all the way to Victoria by the newly-opened trail via Hope on the Mainland to go to Mrs. Staines' school.
"This child was Eliza Anderson, the daughter of Alexander C. Anderson, who was then in charge of [Fort Colvile].
"She and her brother James made the long trip from the Mainland to the island together..It took them many days, and they had most alarming experiences, though thrilling and romantic to look back upon."
Unfortunately neither of these children wrote down those thrilling experiences; we can only guess what happened.
At Fort Langley, "they were met by Mr. Douglas, who took the young girl and her brother in charge.
"They were placed in separate canoes with a half a dozen Indians to paddle each smallcraft.
"In this way they were to travel all the long miles of waterway down the turbulent Fraser, out into the open waters of the Gulf, and across the sweep of sea which feels the rough swell of the straits...
"We can well imagine the emotions of those two children during this dangerous journey, huddled in the centre of the canoes, not understanding a word of the language of the Natives.
"A storm broke and the rain beat down into the canoes, wetting them to the skin.
"The wind blew, and the west loomed up black and terrifying all through the night.
"But the steady chanting song of the Indian paddlers served to reassure the children somewhat, and early in the morning they reached Plumper's Pass to dry themselves and breakfast.
"This last day of the long journey was a pleasant one, and the children slept soundly that night, their fears allayed."

When their father retired from the fur trade in 1853, to build a home in Cathlamet, the two children returned to their family.
They came back to Victoria with their father in late 1858.
Lugrin says that Eliza's father built a new home and "it was at this place that Eliza was married years later to Mr. James Beattie, one of the Hudson's Bay Company.
"Her wedding was one of the most brilliant which had taken place in the colony.
"The bride had become a charming girl; she was known as one of the belles of those early times."

One of her father's steamships was named for her, and there is a story in James Anderson's memoirs that showed how that might have irritated Eliza:
"Some peculiar quasi-public character[s] there were in those days: John Butt, the public bell ringer; the makings of a clever man with a fine voice and certainly with some little education, was without question a hard case," James wrote.
"The population of Victoria was limited and everybody knew everybody -- John Butt therefore availed himself of politely saluting not only the men but the ladies.
"One of his favourite amusements was to take the opportunity of my sister's presence in the streets to announce in a very loud voice the movements of the steamer 'Eliza Anderson' which was named after her.
"He did not get drunk nor grossly misbehave himself, was scrupulously polite and even went so far as to ingratiate himself with the Rev. Mr. Cridge, but his old instincts had been too thoroughly ingrained and he fell from grace and was put in the chain gang for stealing...."

Reverend Edward Cridge married Eliza Charlotte Anderson and James Beattie on the 21st day of May, 1860.
I have a cutting from a newspaper, and I have no idea who the small unbidden guest was!
"I remember another wedding too, a very gorgeous one.
"This was the wedding of Miss Eliza Anderson, Mr. J. R. Anderson's sister.
"She married Mr. James Beattie who was at one time connected with the Hudson's Bay and later a manager of a bank...
"The reception was given at the beautiful Anderson home; they had a large place with a garden and a splendid orchard on Rockland Avenue...."

James Beattie carried Eliza off to London and then to Feilding, New Zealand.
Theirs was the first dwelling house in Feilding, New Zealand.
In 1884 she had eight children; by the time she died she had twenty one children and left a family of 5 daughters, three sons, 17 grand-children, and two great grandchildren.
Most of the descendents of Alexander Caulfield Anderson live in New Zealand and Australia, and now you understand why!
Posted by Nancy Marguerite Anderson at 8:57 AM