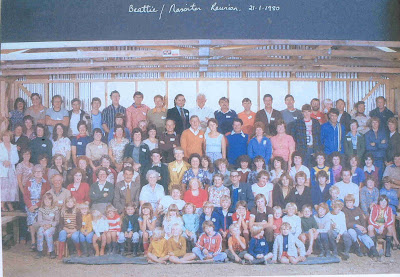 The Anderson family Bible tells us that James Beattie was born at Montrose, 25th January, 1836.

From James R. Anderson's Memoirs we obtain much more personal information:
"In 1859 several additions to the staff of the Hudson's Bay Company were made in the persons of James Beattie, Robert Jesse, and others who came to Victoria by the steamer Labourchere from London.
"These young gentlemen added to those already on the ground formed quite a little society and many were the larks we organised and carried out.
"A favourite amusement was to get old Willie Mitchell to recite Shakespeare.
"One, Ronaldson, who had settled at Metchosin, was one of the elect and we occasionally proceeded by water to spend the weekend with him.
"Once we got storm bound so we had to land and spend the night on the beach, but what was my amazement when the newcomers proposed we should take turn about to keep watch.
"Having slept in the open many hundreds of times, I was naturally curious to know why; the idea of being attacked by savages being the reason given, I made no further demur but promptly went to sleep during my watch...."

"James Beattie of this parish and Eliza Charlotte Anderson of this parish were married in this Church of licence with consent this twenty first day of May in the year One Thousand and Eight Hundred and Sixty,
By Me:
Edward Cridge
This marriage was solemnized between us:
Jas. Beattie
Eliza Charlotte Anderson
In the presence:
Robert Jesse
Catherine Work
I hereby certify that the above is a true extract of the marriage register of Christ Church, Victoria, Vancouver Island.
E. Cridge, Rector of Christ Church, March 23rd 1864."

From James Anderson's Memoirs:
"James Beattie on his retirement returned to England when he became manager of a branch of the British Linen Company's Bank and subsequently accepted the position of Manager of the Bank of New Zealand where he died, leaving a numerous family by his wife, my sister, of whom I have made frequent mention in the earlier portion of these memoirs."

James Beattie's obituary reads: "The Late James Beattie -- the funeral of the late James Beattie took place yesterday.
"The cortage which left the residence of the family shortly after two o'clock in the afternoon, consisted of the hearse containing the remains, which was immediately followed by the carriages containing the chief mourners, who were the four sons, Mr. Revington-Jones (son in law), Dr. D. H. MacArthur, MHB (agents of the Colonists' Land Corporation), and Mr. Oldershaw. ...
"There were in all twenty carriages and forty horsemen, besides a large number of persons who had ridden or driven on to the cemetery.
"The procession was halted at the Church of England, where after the casket containing the remains had been carried into the chancel, the beautiful and impressive service for the dead was read by the Rev. Innes-Jones.
"At the conclusion of the service in the church, the cortege proceeded to the cemetery, where the mournful ceremony was concluded.
"The coffin was covered with wreaths and crosses as it was lowered into the grave.
"Among those present were many of the old settlers, who had come from long distances to render a last tribute of respect to one who had gained the goodwill and esteem of all classes of the community, and to tender by their presence on the mournful occasion, their heartfelt sympathy with Mrs. Beattie and family in their loss of an affectionate husband and a loving and kind father."

The obituary continues: "The late Mr. Beattie was born at Montrose, Scotland, in 1836, and was educated at Montrose Academy.
"He held a Lieutenancy in the Forfarshire and Kincardine Artillery Militia for several years.
"In 1858 he went to America, where he held an appointment for five years in the Hudson's Bay Company.
"He then returned to London, residing there for about ten years, during which time he was Secretary of the National Bank of New Zealand at its formation.
"He was appointed to the management of the Nelson (N.Z.) branch of the same bank, which position he held for some years.
"The E. and C. Land Corporation starting here, he accepted the position of accountant to that corporation, which post he held until the day of his death.
"His illness was of long standing, but he bore up against it with all the courage of his nature, and he may be said to have died in harness."

Eliza Charlotte Anderson and James R. Beattie founded a dynasty in New Zealand and have many descendents who still celebrate their ancestors.
Their descendents carry the names Nossiter, Revington-Jones, Dunn, and Beattie; they still live in Feilding and in nearby communities such as North Palmerston, New Zealand.
Some have moved on to Australia.
Above is a photograph of a Beattie Descendents Family reunion taken in 1980, and I can safely say that Alexander Caulfield Anderson has many more living descendents in New Zealand and Australia, than in Canada and the United States!
There are not many of us left here.
Posted by Nancy Marguerite Anderson at 12:19 PM