Brigade Trails through the South Okanagan 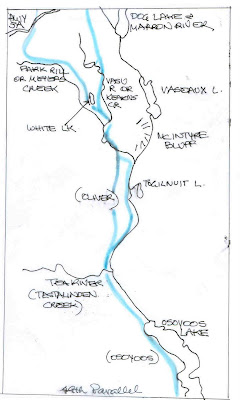 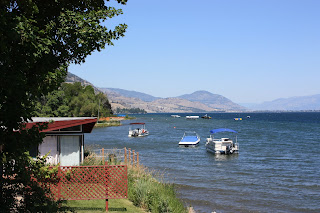 The map above shows both the upper and lower brigade trails south of Dog Lake, with the upper trail entering the map on the top, left, as it passes under Highway 3A, and the lower trail to the right hand side of the map.
You can see that the two trails merge at White Lake for a while, and then separate again as they travel through modern-day Oliver.
However, the accompanying photographs will not follow the brigade trail south, but the lowlands of the Okanagan River valley to the east.
The early fur traders might have followed the Okanagan River (and maybe in 1840 the outgoing brigade went out by the Okanagan River route), but the later traders used Native trails that travelled the hilltops or valleys to the west of the river.
As I have said in my last posting, you can actually follow the brigade trails through the country, by finding the backroads which more or less follow their routes through the valleys and lakes that make travel easy in this country.
But in the south Okanagan, the backroads do not follow the brigade trails as closely as those in the north.
According to my 1999 Penticton Forest District Map, a backroad leaves Kaleden (on the west side of Skaha Lake) and heads toward White Lake, where the two trails divide -- this road more or less follows the Lower Trail but branches off before it reaches White Lake.
It turns west to become the White Lake Road leading in from Twin Lakes Road, which follows Park Rill and the Upper Trail northward for some distance and connects with the Twin Lake Road which goes north to Trout Lake and Highway 3A.
If you are following the Twin Lakes/White Lake road from the west (and Highway 3A), it makes a sharp right turn to the south to reach White Lake -- if you are travelling from the east and Kaleden you will turn left down the White Lake Road to reach White Lake itself.
South of White Lake, the Fairview/White Lake Road joins the above mentioned roads at White Lake, and leads the driver a little north of the brigade trail all the way to Meyers Flat and Oliver to the southeast.
So again, it is possible to more or less follow the brigade trails through this country, by following the backroads.
But the trails are probably on private land, and you must respect that -- ask permission to look for the brigade trails, if that is what you want to do.

These two photographs, one at the top of the page, and one lower, are of Skaha, or Dog Lake.
The top photo looks toward Okanagan Lake, and those are the hills the fur traders would have ridden.
The bottom photo below and to the left looks south toward Okanagan River and Vaseaux Lake. 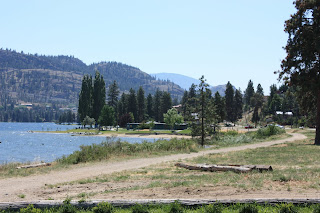 Skaha Lake is a resort town today.
To the east of the lake is Skaha Bluffs Rock Climbing Zone, and as you can see from the photos, this is a boaters' paradise.
The road runs down the west side of the lake, so the brigade trail is behind the photographer and in the hills of the photo that looks to the north. 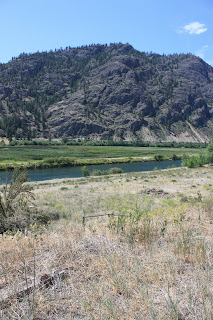 These two photographs show the dry country south of modern day Skaha Lake.
We are following the Okanagan River south from Dog Lake, but I can't tell you which side of the river we are on at this point.
The road runs down the west side of the lake and crosses the River to run down the east side of Vaseaux Lake.
Its hot and dry; semi-desert with dry grass and scattered pines.
Though the brigaders were in the hills and may have enjoyed more shade than if they followed the valleys, I doubt they were much cooler.
They always travelled through this country in early or mid-summer, and their return was in the extreme heat of late summer. 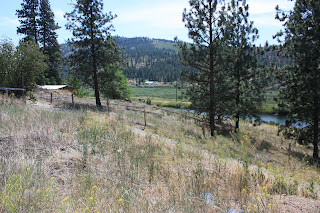 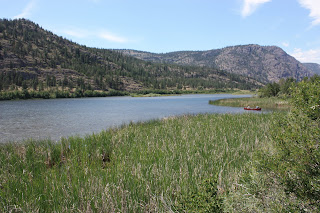 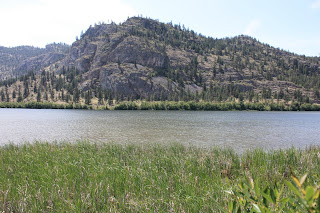 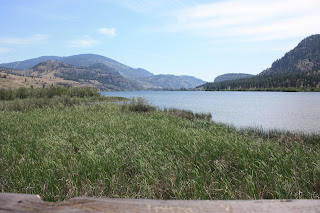 We are looking south down Vaseaux Lake, and you can see the bump of McIntyre Bluff in the centre/right of the photograph.
Vaseaux Lake was often called Oak Lake in the fur traders' journals.
There are no oak here, so you may wonder how it got that name.
Biologists will tell you that a plant called Poison Oak grows along the shoreline of the lake.
Poison oak resembles poison ivy in that it is a stinging plant, and memorable once you have touched it. 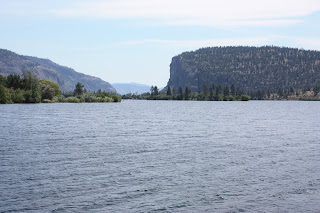 This photograph is of McIntyre Bluff, as seen from Vaseaux Lake.
It lies south of Vaseaux Lake, and the city of Oliver is south of McIntyre Bluff.
The bluff is an impressive piece of rock and is mentioned in some fur traders journals, I understand.
However, the brigade trail did not follow the river along the base of the bluff, but rode along the ridge of hills to the west of the bluff.
They brigaders would have followed their trail over the back of the bluff, on the right hand side of the photograph. 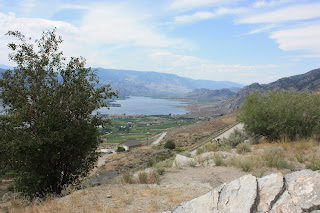 These last two photographs are of Osoyoos Lake, taken from the side of Anarchist Mountain to the east of the lake.
The first photo, to the right, looks up the Okanagan valley to the north, toward the city of Oliver, McIntyre Bluff, and Vaseaux Lake beyond.
The second photograph looks across the lake at the hills that separated the Osoyoos Lake from the Similkameen River valley to the west.
The Similkameen valley is home to another brigade trail -- one that connected Fort Colvile, in American territory after 1846, to the Coquihalla brigade trail to Fort Langley.
We aren't going to follow this brigade trail yet, but it is in our future.
We will follow this trail southward to Fort Okanogan, and then eastward to Fort Colvile, where Anderson spent a few years.
As I have said before now, I have some interesting stories to tell you about Fort Colvile. 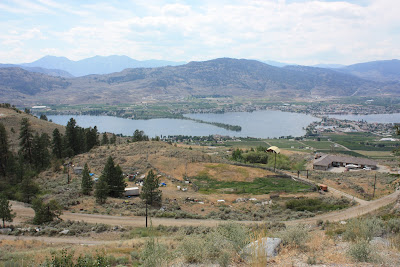 Posted by Nancy Marguerite Anderson at 10:48 AM