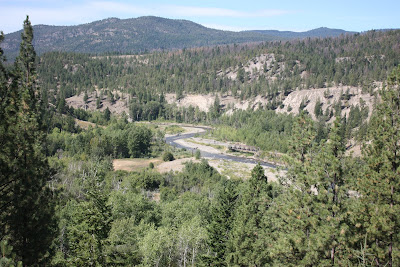 In this photograph of the Coldwater River valley, you can see the east side of the range of hills that the incoming 1848 brigade climbed on their return to Kamloops from the banks of the Fraser River, where they had buried Jacob Ballenden.
That range of hills -- not quite mountains -- stands up to 4500 feet above sea-level, and about 4000 feet above the Fraser River itself.
At its highest point the trail crossed a ridge 4000 feet above sea level.
That is quite a climb for pack-horses.

Once at the top of the hill they dropped down into the Maka Creek and Coldwater River valleys, both about 3500 feet above sea level.
Once in the grassy and open Coldwater River valley the voyageurs became quite cheerful; they knew that it was easy open country between that place and Kamloops.
But they did arrive at Kamloops quite footsore -- because of the shortage of horses many (if not all) of the voyageurs had walked the entire distance from Kequeloose, where Ballenden died, to Kamloops.
According to Donald Manson, they considered that an infringement on their rights.

From Kamloops, Alexander Caulfield Anderson led his Fort Colvile men southward -- probably by the brigade trail -- to his new posting.
At Fort Colvile, Anderson took charge of three important posts and supervised 6 clerks and thirty employees.
Following are the names of some of the men who worked under A.C. Anderson at Fort Colvile, between the years of 1848 and 1852.
I am taking this information from Bruce Watson's 3-volume book, Lives Lived West of the Divide: A Biographical dictionary of Fur Traders Working West of the Rockies, 1793-1858.
No Fort Colvile journals made it to the Hudson's Bay archives, and so I have no other source.

Ateassta, Pierre (Native: Iroquois)
Pierre Ateassta joined the HBC in 1833 from Sault St. Louis and served as a boute in the Athabasca on his way to the Columbia. He appears to have lasted about twenty years as a boute. Little is known about his life, but he stayed within the Fort Vancouver/Fort Colvile area before retiring on March 1, 1852. (There is more information in the actual book).

Aurtaronquash, Louis (fl. 1837-1861) (Native: Iroquois)
Louis Aurtaronquash signed on at Lachine with the HBC as a middleman in 1837. He appears to have spent most of his time at Fort Colvile.

Ballenden, Jacob, the man I spoke of in the last posting -- then to my surprise I found the following man, his brother:

Ballenden, James (c.1822-?) (British: Orcadian Scot)
James Ballenden joined the HBC at Stromness on March 19, 1838, for five years, sailing for York Factory that year. He appeared in the Columbia records in outfit 1846-47 and was discharged in February 1852 after working as a middleman and farmer in several areas. According to his superior, Chief Factor John Ballenden, James Ballenden refused to obey the Chief Factor's orders and so was dismissed from the service and only paid until October 1, 1851. [As far as I know, the two Ballenden brothers were not related to the Chief Factor].

Berland, Edouard (c. 1800-1853) (Mixed descent)
Just when the semi-literate Edouard Berland came to the Pacific slopes has not been established, but in 1827-1828 he was an Indian trader in the Saskatchewan. From 1828-1835 he worked on the Pacific slopes as an independent, occasionally putting in appearances at Fort Colvile, but it was not until 1835 that he was actually hired by the HBC. In the fall of 1841 he had been assigned to provide Governor Simpson with horses at the Continental Divide and sketched a pictograph message with a piece of burnt wood on a tree, signing his name. After some confusion contact was made, Berland guided the party to three hot springs which he claimed had cured him from a severe illness two winters previously. After the 1846 border was drawn, Berland and his family moved upriver to Tobacco Plains. From that point he worked mainly out of Kootenae Fort until he died in 1853.

Chabotte, Jean Baptiste (c. 1828-?) (Canadian: French)
Middleman, Thompson River (1848-1850); Middleman, New Caledonia (1850-1851); Middleman and Labourer, Fort Colvile (1851-1853). Jean Baptiste Chabotte joined the HBC from Lachine in 1847. His contract was to end in 1854, but he retired one year early, probably with the blessing of the HBC as they were downsizing at the time. (That was about the time when Anderson was asking Peter Skene Ogden for more men; Anderson did not feel happy about the downsizing, obviously).

Craigie, William [b] (fl. 1844-1860) (British: Orcadian Scot)
William Craigie joined the HBC from Orkney in 1843, sailed to York Factory and made his way overland to the Coast. On September 1, 1849, he left for the gold fields of California but he was back by 1851, when he was assigned to Fort Colvile.

Curister, David (fl. 1845-1860) (British: Orcadian Scot)
David Curister appears to have been raised in a family of two sisters and two brothers in the township of Gorseness, Rendall, Orkney. Around 1844, he entered the service of the HBC sailing from Stromness. After he arrived in the Pacific Northwest, he worked mainly in the Fort Colvile area until 1860. (A note from me: David Curister is a character in Steve Anderson's new book about Angus McDonald, just published, and he does not appear to have been a very nice man according to Steve.)

Dease, Napoleon (c. 1827-1861) (Mixed descent: English and Salish/Flathead)
Born in 1827 to fur-trader John Warren Dease and a Flathead woman, and died at Fort Langley, September 1861. Napoleon was born into the fur trade and hired by the HBC in 1846. In 1847-1849 he was an apprentice carpenter at Fort Colvile. In 1852 he was put in charge of Fort Hope but the following year was removed because of "scandalous conduct."

Desautel (DeGaspar), Joseph (c. 1827-?) (Canadian: French)
Joseph Desautel, born Joseph DeSautel DeGasper into a Montreal family of nine children, was educated in French schools and went to work at age eleven. He joined the HBC in 1843 from Yamaska and came west where he spent the rest of his life. Throughout his career with the HBC west of the mountains, he moved progressively south until he reached Fort Colvile, where he spent the last year of his work. He retired in 1852 and remained in the area. He settled in the area and lived there for a long time, and died at Curlew Lake, west of Fort Colvile. On Alexander Caulfield Anderson's 1867 map of British Columbia, which includes the country around Fort Colvile, modern-day Curlew Lake is named 'Eliza Lake' -- probably named by Anderson for his eldest daughter.

Deschiquette, Francois (c.1819-1862) (Mixed descent)
Short and stout Francois Deschiquette was around sixteen years of age when he was hired on locally by the HBC. He is said to have been intelligent and competent in business, but fond of drink. He quit work at Thompson's River in 1849 but re-engaged in 1856 to manage the Okanogan post, though he is listed in the Fort Colvile records as a middleman in the years 1852-1856. He worked at the Similkameen post after the Okanogan post was closed in 1860. In a quarrel with Frank Peto, Deschiquette was shot, and died around forty-two years of age, most likely at the Similkameen post (at Keremeos) on August 30, 1862. His grave is on the north side of Blind creek where the old Similkameen-Fairview Road winds up the hill -- another old grave drivers speed past unaware.

Duquette, Antoine (c.1815-1850s) (possibly Canadian: French)
Antoine Duquette joined the HBC in 1835 from Sault Ste. Louis and appears to have spent his career at Fort Colvile. In 1841 he deserted but obviously had a change of heart and returned to work in the fur trade. He is listed as Middleman and boute at Fort Colvile after 1837, and from 1847-1851 he was a Boute (boute as you know is the experienced paddler at the front or back of a canoe). He died sometime in the 1850's.

Finlay, David (?-1849) (Mixed descent)
Apprentice, Fort Colvile (1843-1847); Interpreter, Flathead Post (1847-1848); Apprentice and Interpreter, Fort Colvile (1848-1849); Carpenter, Fort Colvile, 1849. David Finlay joined the HBC in 1843 and worked in the Fort Colvile area. His contract was to have ended in 1850 but on October 1, 1849, he was killed by the Blackfeet Indians when returning to camp after being out hunting. In writing to Governor Simpson, Alexander Caulfield Anderson reported that this young man was the son of the botanist David Douglas.

Flett, Magnus (c.1821-1899) (British: Orcadian Scot)
Magnus Flett joined the HBC in 1844, sailed to York Factory and later worked on the Pacific slopes, mainly as a labourer. He worked as a farmer at Fort Colvile after 1846. When he retired in 1851 he remained in the Colvile area, finally dying of blood poisoning in 1899 at the age of seventy eight.

Flett, Thomas (c.1814-?) (British: Orcadian Scot)
Flett might have been a common name in the Orkneys and there is no indication these two men were related. Thomas Flett was a labourer at Fort Colvile after 1834, and between 1837-1839 it appears he was in charge of Fort Colvile in the summers [when everyone was away on the express?] and Kootenais post in the winters. He was sometimes Middleman at Fort Colvile (1838-1839), sometimes postmaster (1840-1842), and sometimes Interpreter and Indian trader (1842-1851). By 1856 he resided in the Colvile valley and was a citizen of United States.

Garrick, John (c.1832-1893) (British: Scottish)
John Garrick joined the HBC probably in 1850 or 1851 and came to Fort Colvile in 1852. During his time there, he appears to have carried dispatches from Colvile to Vancouver and, in the early 1850's, he took part in the Rogue War. Anderson might have known this man but would not have worked with him for any period of time.

Goudie, James [variation: Goudy] (1809-1887) (British: Orcadian Scot)
As the Goudies of Stromness had been blacksmiths for generations, James Goudie probably found himself working at the forge from an early age. However that did not prevent nineteen year old James from seeking adventure by joining a seasonal whaling vessel which took him to the David Straits in 1828. Nonetheless, back in Stromness, necessity dictated that he return to his inherited profession and so, on May 6, 1829, he joined the HBC as a blacksmith for five years. Leaving behind a widowed mother, two sisters and a married brother for the last time, he sailed to York Factory, made his way across the continent and spent the winter of 1829 at a Peace River fort. That winter, the new working environment dictated that he learn French; additionally he learned to play the violin which he built himself. His violin playing was to last for many years -- in 1849 he asked John Charles, who was passing through Fort Colvile on the Columbia Express, to obtain a fiddle or strings for him. He had begun work at Fort Colvile in 1830, and managed the fort's grist mill. (I have something to add to this story that appears to be unknown by Bruce Watson.) James Goudie came to Victoria where he died in 1887. His grave is in Ross Bay cemetery.

Well, so far I have gone through the first volume of this three volume book and already I have identified a good number of the men who worked at Fort Colvile while Anderson was there.
I will continue this listing in my next posting -- well, maybe the posting after the next posting -- next weekend probably.
It is interesting to see the wide variety of men who worked in the fur trade at a single post like Fort Colvile.
Some were quite old and had a great deal of experience.
Others were young men from interesting and varying backgrounds.
Only a few were born into the fur trade and knew no other life.
We will see what I come up with in the next batch of Fort Colvile employees under Alexander Caulfield Anderson, 1848-1852.
Posted by Nancy Marguerite Anderson at 7:49 AM