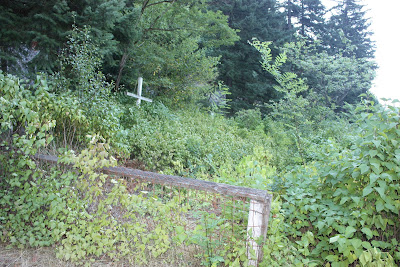 A ghostly cross floating above a tangle of bushes -- a piece of fur trade history that thousands of drivers speed past every day, unaware.
This is the graveyard just south of Alexandra Lodge, in the Fraser River canyon, where Alexander Caulfield Anderson and his men buried Orkneyman Jacob Ballenden two hundred and thirty seven years ago.
His was the first grave here, but others followed, and there are now two historic graveyards at the foot of the 1848 Anderson River brigade trail where Jacob Ballenden killed himself so many years ago.

Jacob Ballenden came from Sandwick, Orkney, and entered the fur trade in 1842.
For five years he served at Fort Colvile on the Columbia River, before spending a year at Cowlitz Farm in 1847-1848.
He must have returned to Fort Colvile with the Fort Vancouver men who were sent upriver to assist the outgoing Fort Colvile brigade as they took their furs out by horseback over the unfinished Anderson's River trail to Fort Langley in 1848.
As you probably know, the Fort Colvile men always delivered their furs to Fort Vancouver by boat every summer.
But 1848 was a different year, and Jacob Ballenden's sudden death was the result of those changed circumstances.

The changes began slowly.
In 1846-1847 the measles was epidemic throughout much of Europe; it reached North America and appeared to travel from the east toward the west.
It was reported in Red River about 1846, and from there spread west and south to reach the Shoshone people of modern-day Wyoming in 1847.
The Americans who travelled the Oregon Trail were blamed for bringing the measles west, though my source, Robert Boyd's The Coming of the Spirit of Pestilence; Introduced Infectious Diseases and Population Decline among Northwest Coast Indians, 1774-1874 (Vancouver: UBC Press, 1999), says they were not responsible for the outbreak amongst the Natives at Waiilatpu.
It appears that horse-trading Natives who visited California in summer 1847 brought the disease north with them.
The illness spread quickly amongst the Indian bands that visited the Waiilatpu mission east of Fort Nez Perce, on the Columbia River -- a place where many Native tribes met, mixed, and feasted.
In July 1847, artist Paul Kane wrote of the illness that spread among the Natives returning from California, talking of their "suffering and detention by sickness."
Kane described how a surviving Native chief who had been part of this horse-trading expedition told others of his tribe what had happened:
"After describing the progress of the journey up to the time of the disease (the measles) making its appearance....he began to name its victims one afer another.
"On the first name being mentioned, a terrific howl ensued, the women loosening their hair and gesticulating in a most violent manner...
"He, after much persuasion, named a second and third, until he had named upwards of thirty."

Measles is an illness that is spread by contact, and the Natives gathered in large numbers at Waiilatpu.
They also sent messengers to all the villages nearby, and some of these messengers carried the measles virus with them.
The virus travelled north to Fort Colvile, where one hundred Native men died.
At Kamloops thirty five Natives died and all the men at the fort were flattened by the illness; at Fort Alexandria a substantial number of Natives died and everyone inside the fort fell sick.

But at Waiilatpu mission the Cayuse Natives appeared to succumb to a particularly malignant mixture of measles and dysentry.
The missionary, Dr. Marcus Whitman, continued to treat the sick with whatever medicines he had available.
An American or half-breed troublemaker named Joe Lewis had arrived at Waiilatpu in 1847, and spread rumours amongst the Natives, telling the Cayuse that Dr. Whitman was spreading poison in the air to kill off the tribe.
The desperate and frightened Natives believed Lewis and decided to get rid of Dr. Whitman.
They swarmed into the mission and massacred the residents, including Dr. Whitman, his wife Narcisse, and other missionaries or employees of the place.
In their March 1848 letter to Governor Simpson, James Douglas and Peter Skene Ogden reported from Fort Vancouver:
"...In a fit of desperation, they [the Cayuse] attacked the American Mission at Waiilatpoo near Walla Walla [Fort Nez Perce], and murdered Dr. Whitman, his accomplished Lady and 11 other American citizens, with the most heartless and revolting barbarity.
"Intelligence of that fatal disaster arrived here five days posterior to the event, through a messenger dispatched from Walla Walla by Mr. [William] McBean.
"It was immediately resolved to send up a force for the protection of the Company Establishment at Walla Walla, and, if possible, to rescue the surviving members of the unfortunate Mission family who remained in the hands of the Indians...
"Chief Factor Ogden took command of that party, and after a rapid march arrived safely at Walla Walla..."

Ogden successfully rescued many of the survivors, but as the result of the American settlers' reaction to the Waiilatpu massacre, and the distrust that had caused the massacre, many of the Native tribes along the river went to war.
The fur traders decided to bring out their furs over the trail that Alexander Caulfield Anderson had explored in 1847 through the Fraser Canyon and over the hills behind Kequeloose to the Nicola Valley.
The Kamloops and Fort Langley men patched up the road as best they could, but the four hundred horses of the combined brigades had a difficult time coming out over the virtually unimproved trail.
They had to return over the same difficult trail.
It was apparently too much for Jacob Ballenden.

A young clerk named Henry Newsham Peers kept a record of the incoming brigade of 1848: Private journal of Henry Peers from Fort Langley to Thomsons river, summer 1848 [BCArchives]
In it he recorded Jacob Ballenden's death:
"We encamped at the foot of Big hill where the road leaves Fraser River, many of Brigades only arriving when pitch dark & consequently great confusion from horses straying with their loads and so forth; several fell down a steep hill on nearing the encampment (the only bad one on the road) from weakness, threw their loads & a bale was swept off in the river before it could be seized & one animal killed.
"Deynette [?] slept here to take care of the aforesaid pieces.
"7th August -- Rainy weather -- This morning Jacob Ballenden was found dead near the encampment with his gun discharged by his side, shot thro' the heart; it is supposed he committed suicide; the day was spent in collecting strayed horses with their loads and all found but 6 pieces and another horse killed.
"A war party of the Chute indians against those of Anderson's River passed the camp and created some little alarm.
"Weather cold & showery, interred the deceased Pere Nobili saying the funeral service -- nothing I may say here for the horses to feed on."

On his arrival at Kamloops, Donald Manson reported on Ballenden's death to the Board of Management at Fort Vancouver [B.223/b/37, HBCA]:
"I am truly sorry to inform you of the death of one of our men (Jacob Balentine from Colvile) on the morning of August [7th] he was found dead about 1/2 mi. from our camp, shot through the heart, his gun lying by his side & discharged.
"Mr. Anderson with several of his men who went to carry in the body to the camp declared it as their opinion that the poor unfortunate man must have put an end to his own existence either designedly or by accident, as no traces were seen near the body which might lead to the supposition that he had been killed by Indians.
"The body was becomingly interred on the spot."

From Kamloops, Alexander Caulfield Anderson rode south east with the Fort Colvile men, to take over the command of that fort.
He would never return to Fort Alexandria, New Caledonia, where he had spent a little more than five years in command of the post.
But he would again ride over the Anderson's River trail one more time, leading the Fort Colvile men to Fort Langley and back.

Posted by Nancy Marguerite Anderson at 4:41 AM