Christmas in a fur trade fort 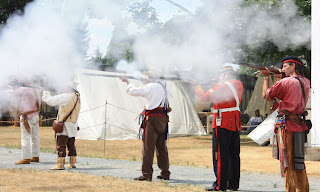 The Christmas holiday began with a half day off work on Christmas Eve.
At day-break on Christmas morning, the voyageurs celebrated the holiday by firing their guns into the air.
The dozen or more voyageurs did not fire their guns all at once, but took turns firing their guns one after the other -- bang! -- bang! -- bang!
In this way the voyageurs orchestrated a celebration that lasted more than a few minutes, and ensured that everyone around them -- the gentlemen and the homeguard natives -- knew that Christmas morning had arrived.
Celebrating Christmas was, of course, part of the Catholic religion of the French-Canadian voyageurs.
But the fur trade was a mixture of cultures, and the firing of guns into the air came from the aboriginals.

After waking up the gentleman with their gunfire, the voyageurs came to wish him a Merry Christmas, and to receive their regale.
On Christmas morning 1846, Alexander Caulfield Anderson gave his voyageurs a meal of meat, flour, and potatoes.
He doesn't mention the pint of rum he gave them, but it was definitely a part of the voyageurs' regale.
At Fort Alexandria, the natives also received a regale of meat and potatoes, but tobacco was substituted for rum.

The voyageurs did not celebrate with the gentleman, but returned to their houses to prepare their meal and drink their rum.
The gentlemen -- that is the gentlemen in charge of the fort and any clerks he had under him -- did not celebrate Christmas with their voyageurs, but with each other.
However, both gentlemen and voyageurs might have celebrated Christmas with the homeguard natives (those who lived near the posts), because this was an excellent time to encourage them in their hunts.

The fur trader rarely made any entries in the post journal on Christmas Day, excepting a note on the weather.
Other celebrations not mentioned in the fur trade journals may have been common at the various forts in New Caledonia.
For example, on New Year's Day 1843, Anderson arranged a shooting contest between the French Canadian voyageurs and the natives that surrounded the post, with the prize being a set of leggings from the post store.
Because of the extreme cold, everyone shot poorly.
For the most part, the French Canadian employees made better shots than the natives, but a native man named Grand Corps carried off Anderson's prize for the best shot made that day.

Merry Christmas and a Happy New Year, everyone!
Posted by Nancy Marguerite Anderson at 9:46 AM