The Smell of Furs 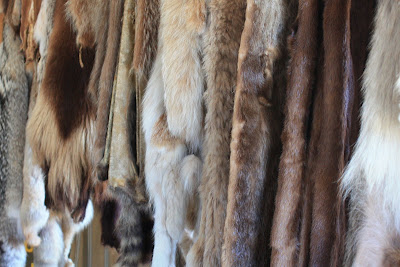 One of the most important thing I did as I prepared this manuscript for publication, was that I gave it to four people to read.
One of my readers questioned the fact that I said in my manuscript that the furs smelled.
"What did they smell like"" he asked.
Great question, but it is not the easiest question to answer by any means.
In his book Sources of the River; Tracking David Thompson across Western North America, Jack Nisbet says: "An average beaver pelt weighed a little better than a pound, and one pressed pack .... usually topped ninety pounds. Warm or wet weather would draw out the smell of any unscraped fat, and the fur bundles often made rancid travelling companions."

That's a good start, and for a while I thought I might have to be satisfied with that answer.
Then, as I flipped through the index of the Beaver magazine, I discovered a heading that read "the distinctive smell of furs."
In an early Beaver Magaine is an article by J.D.J. Forbes, Show Week in the HBC London fur warehouse (Beaver Magazine, April 1921).
In the London warehouse, each fur is stored on its own floor -- it is an easy thing to discover what odour each animal's fur carries!
Mr. Forbes says, "Another thing that strikes the casual visitor is the variety of odours he encounters as he goes from one floor to another. The distinctive odour of the muskrat, for example, is quite easily distinguished from the peculiar smell which clings to the marten or Canadian sable. Bears have odours of their own, and that connected with the black or brown bear is quite different from the polar's flavour. Otter and mink skins each have faint but recognizable smells, and fisher is at times quite pungent. Fur seals in brine and dry hair seals are not difficult to scent, and wolves soon betray their presence. Beaver and foxes perhaps are most free from odour, whilst the smell of wild skunk is the most obnoxious."

The furs are quite beautiful, Mr. Forbes tells us.
No fur is more sparkling than the skunk's when it is cleaned; the soft richness of the beaver fur is only revealed after processing, when the long copper-coloured hairs are removed.
The otter fur is close and short and is much more durable than the rougher coat of a fox or a wolf.
Canadian sable or marten, mink, fisher, and lynx are on the floor above the otter.
These are the fine furs, with mink being the least valuable, though it is popular.
Lynx is silky but fragile; and usually dyed black before use.
The variety of colour in marten skins is extraordinary, he says, but the darker colours are the most valuable.
Fisher, the largest members of the weasel family, has the most handsome coat and can almost compare in value at times with the sable.
Bear skins take up much more room on the floor than the more valuable furs.
In the HBC warehouses, the valuable fox skins were stored on the top floor.
There was red, blue, white, and silver foxes -- I also know that Anderson called some of the foxes he saw in New Caledonia "cross foxes."
The white fox and blue fox (which has shades of blue and brown) were both Arctic breeds; Anderson would not have seen them in New Caledonia.
Here's a mention of the cross fox: "Cross fox is another very popular article which in size and texture is similar to its kinsman the red fox, but it differs from the latter in that its back is usually covered with silvery hair and a more or less well-defined black cross is to be seen on its neck...."
Wolves have a coarse fur; wolverines were distinguished by their distinctive saddle of dark colour surrounded by a belt of lighter coloured hair.
But the silver fox was the most valuable fur of them all, with its fine hair and beautiful coloring that ranged from pure silver-white to a deep, rich, black.
Posted by Nancy Marguerite Anderson at 1:49 PM