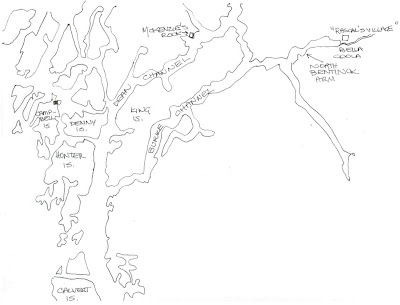 Anderson's first reference to Fort McLoughlin was, of course, his letter to Uncle Alex Seton, when he says that he arrived at Fort Vancouver (Columbia River) "after a voyage from York Factory of 3 1/2 months -- partly on horseback -- in boats & in canoes."
"I am now on the point of starting for the north west coast in a brig belonging to the Company," he continued, "in company with a party of two other Gentlemen & 40 men, the object being to erect an establishment at a placed called Millbank Sound." (Source: Mounie Archives)

In his History of the Northwest Coast, he tells us of the excitement of an collision with the native tribes that surrounded Fort McLoughlin:
"Our land party consisted of 40 men, the vessel which conveyed us to our destination, a brig called the 'Dryad,' was ordered to remain moored opposite our encampment in order to afford us if necessary, the protection which our guns might be supposed to afford.
"Our operations proceeded rapidly, and by the month of October the area of the fort was well picketed in, bastions constructed at the corners, and several substantial houses within. So far no serious disagreement with the natives occurred, or if any had occurred through the imprudence of our maritime protectors, the differences had been checked with a firm hand and in a kindly spirit.
"Unfortunately, however, about the 1st of October one of our men, named Richard, a French Canadian, was found to be missing: enquiries were made of the Indians, and the answer recd so evasive that we judged it proper to seize one of the chiefs and hold him as hostage. Tyeet, the chief in question, was a well disposed Indian, as we supposed, and we found it difficult to reconcile the contradictory statements that were educed in various periods of our enquiry, yet nothing farther could be done save to retain him until some intelligence of our missing man should transpire.
"Everything remained quiet and undisturbed for a few days, yet I could not but suspect the unwonted tranquility that reigned around. It was a Sunday and not a soul was to be seen outside the fort, save only a solitary Indian seated by a small fire on the opposite side of the bay.
"Evening came on, and the men asked permission to go outside for water. Reluctant to do so at that late hour, I declined to give the keys without the sanction of my superior; which being given the men went out leaving two only within the fort who were appointed to guard our hostage; and one who guarded the wicket.
"I myself went out having my pistols upon me, and leaving my other arms where they were easily accessible, for I had my misgivings and they were very shortly realized.
"(I) advanced to the edge of the bank, and looking around when suddenly, within a few paces of me, I saw darting thro' the bushes a host of armed Indians.
"I turned at once, gave the alarm, and retreating to the fort was speedily prepared to defend the entrance...."

In his Notes on the Indian Tribes of British North America (1855), Anderson wrote: "(The Cowichans) are succeeded by the Hailtsa connexion, commencing in about latitude 51 degrees N. and extending through the ramifications of Fitzhugh and Milbank Sounds. The Hailtsa tribes communicated with the southern branches of the Ta-Cully sept of New Caledonia, the Ta-otin, Chilcotin, and Nascotin, namely of (Fort) Alexandria."
Anderson's Notes on the Indian Tribes of British North America is freely available on the internet -- you should have no trouble downloading this entire manuscript.
The Ta-Cully tribes he speaks of are those who surrounded both Fraser's Lake and Fort Alexandria; they are also called the Carrier.
The way the natives from the coast -- those that surrounded Fort McLoughlin, and the Nuxalk people from the native village at the mouth of the Bella Coola River -- communicated with the Ta-cully tribes around Fort Alexandria and Fraser's Lake, was by travelling up the native grease trail that followed the Bella Coola River into the interior.
They carried with them their valuable eulachon oil, and traded that fish oil for the rich furs of the interior.
The Ta-Cully people and natives from the coast met at Kluskus Lakes, on Alexander Mackenzie's West Road River.

Fifty years after he helped to build a fort in the estuary of the waters that Alexander Mackenzie had explored, he returned to visit the native village at the mouth of the Bella Coola River.
It was at this time that he heard the natives' version of Alexander Mackenzie's visit to the coast.
Anderson's friend wrote the natives' story down.
"McKenzie is still talked about by old Indians, one of whom related to me an anecdote which had been handed down through successive generations, viz., that the canoe load of Indians who accompanied and followed McKenzie a short distance down the channel, seeing him take an observation with an instrument (the sextant), said that immediately after "fire came down from the heavens."
"This so frightened them that they at once declined to go farther, turning back and leaving the distinguished voyageur to himself."
This is what Anderson said of the occasion:
"The Indian tradition has been vividly preserved even to minute particulars, and it is interesting to note the different aspects which the same circumstances assume, when regarded from the opposite point of view."
Posted by Nancy Marguerite Anderson at 6:41 AM