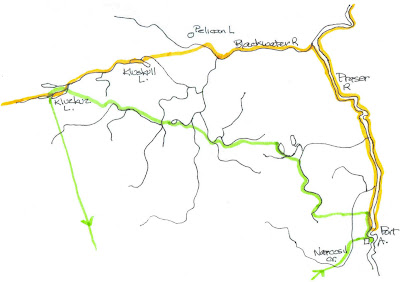 In "British Columbia," draft unpublished manuscript (PABC), Anderson says: "Passing over several brooks which fall in on either side as we descend (the Fraser River south of Fort George), the next stream of any magnitude we arrive at is the West-Road River of (Sir Alexander) Mackenzie. This stream, which can scarcely be called navigable to any useful end, is called by the natives Nas-coh -- the people in its vicinity Nas-cotin. Higher up its chief branch is called Tee-a-coh (ie. Literally "Road River.") One of its chief feeders is the lake Thleu-uz-cuz (ie. "Split fish" -- the Slou a cuss of Mackenzie). By the line of this stream, crossing afterward the dividing ridges, Mackenzie penetrated to the Sea at the head of Milbank Sound, where he narrowly missed falling in with the exploring parties of Vancouver."
Anderson was always interested in Mackenzie's 1793 exploration. In the above map, Mackenzie's route down the Blackwater or West Road River is indicated in yellow -- you will see that he descended the Fraser River as far as the area where Fort Alexandria was later located, before returning to the north and taking Blackwater or "West Road River" to the Pacific Ocean. While he was in the area where Fort Alexandria was later built, Mackenzie had his clerk carve his name and the date, 1793, on a tree trunk. Whether the NWC men who built Fort Alexandria in 1821 ever found the tree is unknown, but Anderson never mentioned the then fifty-year old carving in his writings.

In 1844, Anderson made his own journey to Mackenzie's West Road River to establish a fur trade post on Thleuz-cuz Lake -- now Kluskus Lake. His approximate route from Fort Alexandria (which was then on the west bank of the Fraser River) followed a Ta-cully footpath that took the fur traders over many wooded ridges of land and along the shorelines of several small lakes. As the Ta-cully people travelled great distances on foot, the fur traders found that riding horses over their uncleared footpaths was slow and tiring work.

Anderson reached Thluez-cuz lake after six days travel, and found a large number of Natives gathered for a feast. The Ta-Cully people were delighted when Anderson said he planned to set up a post at Thleuz-cuz, and warned him that, if he did not, their furs would continue to find their way to the coast by the Natives' grease trail.

In his 1867 map of British Columbia, Anderson called Thleuz-cuz Lake 'Pelican Lake.' It is likely that when he arrived at the lake, he discovered a healthy breeding colony of White Pelicans at the lake. They are there no longer -- the only place that the American White Pelicans breed in British Columbia today is at Pelican Lake, north and east of Anderson's Pelican Lake of 1844.
Posted by Nancy Marguerite Anderson at 6:40 AM