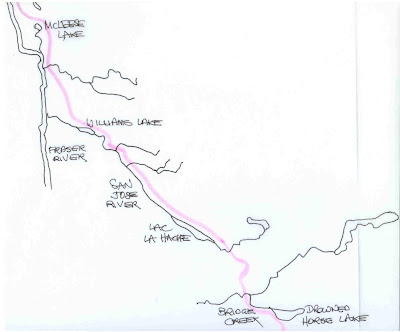 I had always thought that, of all the naturalists that came to the west, David Douglas was the man who Anderson had no connection with. I was wrong!
Jack Nisbet, author of The Mapmakers Eye, has published his biography of the naturalist David Douglas, and I have discovered quite a few connections between the two men.
In 1826-7, David Douglas infected George Barnston with his love of nature; in 1830 Barnston retired from the fur trade, and a year later rejoined, travelling west as far as Lake Superior, with Alexander Caulfield Anderson. The two corresponded for years afterwards, and as late as 1870, Anderson's daughter Rose collected seeds for George Barnston.
Certainly Douglas knew Anderson's father-in-law, James Birnie -- in 1830 when Douglas was one of many to fall sick of malaria, James Birnie was one of two clerks who nursed the malaria-infected men back to health.
When Alexander Anderson arrived at Fort Vancouver in winter 1832, David Douglas was in London. He had left Fort Vancouver in 1827, and did not return until 1829. In November 1830 he sailed to California; in August 1832 he was in Hawaii; in October he returned to Fort Vancouver -- Alexander Caulfield Anderson arrived in early November at the same place.
In March Anderson left for the Northwest coast, and Douglas travelled with the New Caledonia brigade north to Stuart's Lake post (Fort St. James).
Douglas did not travel north by the brigade trail over the Thompson plateau, but by another trail that is shown on Alexander Caulfield Anderson's 1867 Map of British Columbia.
By this old trail, Douglas reached Drowned Horse Lake (Horse Lake) and Lac la Hache, and travelled north and west by the same trail that Anderson now followed south from Fort Alexandria.
Reference: Jack Nisbet, "The Collector; David Douglas and the Natural History of the Northwest," Seattle, Sasquatch Books, 2009.
Posted by Nancy Marguerite Anderson at 2:24 PM