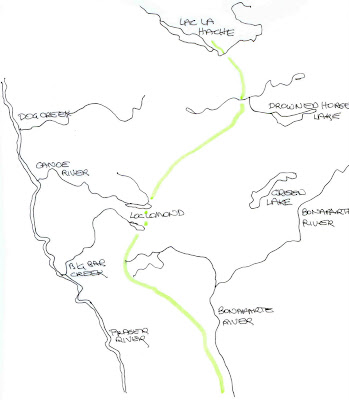 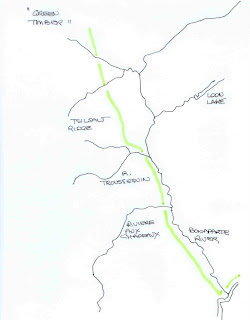 On his 1867 map of British Columbia, Alexander Caulfield Anderson drew the line of a trail that until now I have had no explanation for.
Other historians have called it an "alternate trail," and so that is what I have called it, too.
But I have, I think, discovered why this alternate trail existed, and why it was never used as a brigade trail.
In 1833, the naturalist David Douglas travelled north to New Caledonia with a herd of cattle which was being driven north to Stuart's Lake post (later Fort St. James).
They travelled up the Okanagan trail -- on the old trail because they passed McIntyre Bluff -- and reached the Thompson River post, where Sam Black was in charge.
The cattle plodded along the shores of the Thompson River west of Kamloops Lake until they crossed Bonaparte River near its mouth and followed it up its west shore.
When the men reached the Bonaparte River area, they travelled through bogland -- and that is why this trail, though known to the fur traders, was never used as a brigade trail. 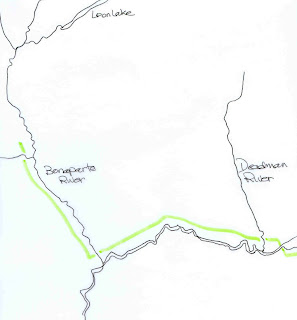 The fur traders would have had to cross the mouth of the Riviere du Dufunt (now Deadman's River) by canoe.
Their horses (or in this case their cattle) they might have driven upriver until they found a safe place to cross the river.
In 1846 Anderson and his party could not cross the swollen Riviere du Defunt without the aid of a rickety canoe that Anderson's men found in the bushes.
Later, Anderson wrote that the Secwepemc or Shuswap people, whose territory they were now in, "principally do their travelling on horseback & have very little knowlege of the art of constructing canoes, the only use they ever make of them being just for the purpose of ferries where the water is too deep to ford."
Familiarity with the Secwepemc's habits illuminated the Company men's course of action.
"Found River du Defunt much swollen; and having searched in vain for a tree suitable for a bridge, we went at length to the mouth of the river and having procured a crazy old canoe, we succeeded in doubling the end of the impediment upon the main stream. After several successful trips with our sorry vehicle we nearly experienced an accident at last, for Montigny with [another] of the men and several Ind[ian]s narrowly escaped missing the eddy, and being swept into the boiling rapids some hundred yards below. Having crossed safely myself at the first trip, my feelings at witnessing the imminent danger of these people may be conceived."
This last quote comes from Anderson's "Journal of an Expedition under Command of Alex C. Anderson of the Hudson's Bay Company, undertaken with the View to ascertaining the practicability of a communication with the interior, for the import and the annual supplies," A/B/40/An3.1, BCArchives.
Travelling south and east, it was only a short distance from the mouth of the Deadman River to the end of Kamloops Lake, where they crossed the Thompson River and rode over the folding hills to the old Thompson's River post, at the far end of the lake.
When David Douglas arrived at the Thompson River post (the Kamloops post before 1843) the fur trade post was on the other side, or east bank, of the North Thompson River.
Posted by Nancy Marguerite Anderson at 11:17 AM