The old Brigade Trail over the Thompson Plateau 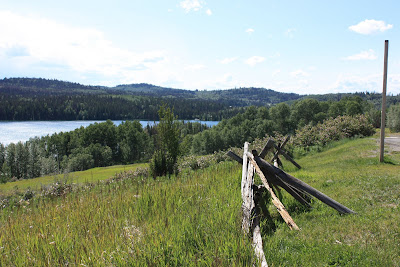 Today we are going to follow the outgoing brigade from Fort Alexandria, on its 1840 journey across the North Thompson plateau to its traverse at modern day Little Fort, British Columbia.
We have followed the streams to Lac la Hache and taken a short diversion down the Bonaparte River trail that David Douglas might have travelled many years earlier.
Now we leave Douglas' story and return to Anderson's.
This is a big country; a rough country filled with lakes and bogs which made travel difficult.
The map below shows that the fur traders' travelled to the north of Drowned Horse Lake and followed the river valley eastward toward Salt Lake, Lac Tranquile (Lac Traverse), and Lac du Rocher.
The photograph at the top of the page is of one of the two bigger lakes on the top of the plateau; it looks westward toward the Fraser River.
The brigaders followed the north shores of the various lakes -- Drowned Horse Lake, Lac Traverse, and Lac du Rochers.
They then crossed the bog they called the Grand Muskeg, and descended the Big Hill.
Once again on flat land, they followed the eastern side of the plateau and crossed open grassland to reach the banks of the North Thompson River.
The modern day road travelled south of Horse Lake; the old trail went to the north of the same lake (called Drowned Horse Lake).
Notice, please, that the new brigade trail is also shown on the map below, but it runs a different course than the trail I have shown in an earlier post.
It followed the south shore of Horse Lake before swinging south and west to the northeast end of Green Lake.
I believe that, in 1843, when Anderson first took the brigade out over the new trail, that this is where the trail ran; in later years they cut off that loop and travelled across country by the esker that led them to Green Lake.
Why do I believe this?
In 1843, the Fort Alexandria journals told us that the brigaders lost a few brigade horses which were later located near Horse Lake.
If the early trail had run along the esker between Green Lake northwest, avoiding Horse Lake, the horses would not have drifted so far as to reach Horse Lake. 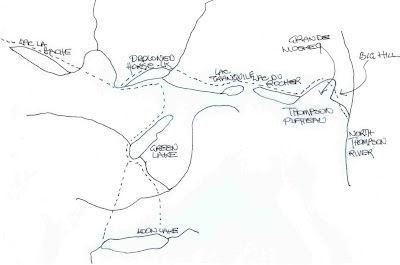 In the photographs below we have travelled eastward, bypassing Horse Lake which lies to our left hand and driving past Lac Tranquile and Lac du Rocher.
The first thing I noticed about these plateau lakes was their brilliant blue colour.
There are no more clouded, green-coloured or alkali lakes in this part of the world, as there is in the Cariboo to the south-west.
On both lakes we are on the north shore, following the road a little above where the brigade trail would have travelled.
According to the map above, the brigaders travelled close to the north shore of the two or three lakes that lay along their route. 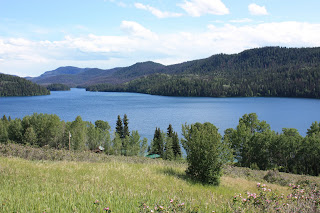 Agriculture has changed the face of the land on the top of the plateau.
When the fur traders crossed the plateau, it was unlikely the land was as clear as it is today.
This photograph looks eastward along the length of the lake toward the North Thompson River and the mountains on the river's east shore.
You can see that this country was rocky and hilly, not necessarily easy travelling for horses. 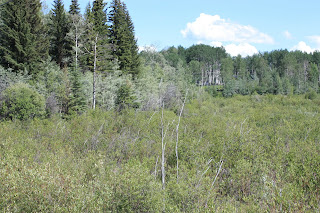 This is a photograph of a bog alongside the modern day road -- is this the fur traders' Grande Muskeg?
Probably not.
I never hiked this trail; that will be someone else's story to tell.
But this bog is somewhere in the area around the fur traders' Grand Muskeg, and must resemble the bogs they had to pass through to make their journey across the North Thompson plateau.

Bogs are deadly to horses and the Grand Muskeg was the most difficult part of this journey.
I am putting in a modern-day aside here: I watch a TV show called Mantracker, a modern-day reality show that pits two "prey" against an experienced wilderness tracker and his guide.
Mantracker follows his willing prey through whatever country they lead him into.
It is fascinating to watch where the trackers' horses can travel, and where they cannot go.
From that show, I have learned a lot about the difficulties the brigaders had while riding around this rugged country.
The prey, who of course know the difficulty horses have with bogs, often take to swampland to escape Mantracker.
Sometimes when I watch this TV show, I am thinking about the brigade trails; but mostly I enjoy the show because I am a fan.
The photograph below was taken directly behind Little Fort.
Do not imagine that this is the brigade trail mounting the hills behind Little Fort, because it is not.
That hill to the right of the photograph is the Thompson plateau, and the riders travelled quite a long distance from their crossing before they reached the base of that plateau and followed their trail up its side.
If I had known then what I know now, I could have shown you the brigade trail as it mounted the east edge of the plateau.
There are people who have uncovered many portions of this old trail; it has not disappeared and many pieces of it can be discovered, if you know what to look for. 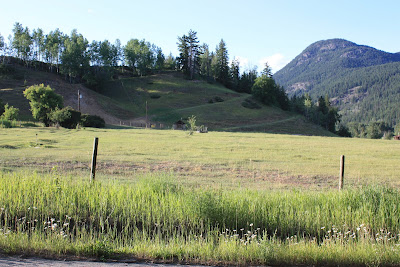 Posted by Nancy Marguerite Anderson at 10:09 AM