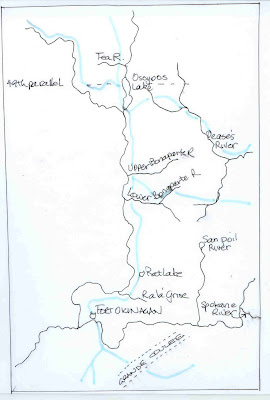 The fur traders continued their journey south, riding southward along the west shore of Osoyoos Lake toward Fort Okanogan.
You will now notice the different spelling of the post.
Americans spell the word Okanogan but Canadians spell it Okanagan.
But when Alexander Caulfield Anderson first entered the territory west of the mountains in late October 1832, he learned to pronounce this fort's name "O-kee-na-gan," and spelled it Okinagan.
That is the spelling he used for the rest of his life, and he probably continued to pronounce the word the way he first learned to say it.

You will see that as they passed by Osoyoos Lake, the fur traders passed the 49th parallel of latitude, into what they called The Debated Territory.
In 1840, the boundary line between United States, and British-owned territory claimed by the Hudson's Bay Company, had been surveyed only as far as the east side of the Rocky Mountains, and Britain and United States shared ownership of the Columbia River basin.
Other than the Natives and a few American free-traders or trappers, the British fur traders and their employees were almost the only occupants of this territory.

As I told you in an earlier posting, Tea River (near the top of the map) was a regular campsite for the brigaders -- its modern-day name is Tesalinden Creek.
At Osoyoos Lake you can see Hudson's Bay company trails leading to the west, over the hump of land to follow the Similkameen River to the west -- this is the brigade trail that the Fort Colvile men used after 1848, but it was also a trail that the Natives in the district, and the fur traders, used regularly.
To the east of Osoyoos Lake is the Fort Colvile brigade trail that climbs over Anarchist Mountain, to cross Rock Creek and follow the Kettle River to the Columbia River.
Anderson called the Kettle River "Dease's River" on this 1858 map, and he continued to call it Dease's River on his 1867 map of British Columbia.
Dease's River would have been named for John Warren Dease, who worked in the Columbia District before Anderson arrived, and who certainly knew Anderson's father-in-law, James Birnie.
In his essay, "History of the Northwest Coast," Anderson wrote of John Warren Dease, who "...died at Fort Colvile on the Columbia River in 1830, and was buried in the Fort Vancouver cemetery, near the spot where the U.S. Garrison buildings were afterwards erected."

Twenty five miles south of Tea Creek was a place called Horseshoe Lake, where the brigaders camped again.
We can only speculate where Horseshoe Lake was -- I don't have a good map of this part of the world.
But according to Anderson's 1867 map of British Columbia, it might be a lake on the upper reaches of the Upper Bonaparte River (on that map the river has two branches and the lake appears to be on the northermost branch.)
Their next camp might be on the lower Bonaparte River; then they camped at a place they called Omak.
My modern day map of Washington State shows Omak Lake (and Omak River), quite a large lake lying east of the town of Omak, Wa., in the Colville Indian Reservation.
That might be the Rat Lake shown on our map above.
According to James Gibson, author of "The Lifeline of the Oregon Country; The Fraser-Columbia Brigade System, 1811-47 (UBC Press, 1997), it took eight days to ride the distance between Thompson's River (Kamloops) and Fort Okanogan.
But he does not have any information on the camping places along the brigade trail, unfortunately.

When the fur traders rode into Fort Okanogan, they unloaded their horses and turned them loose to graze for the summer.
The rest of the journey to Fort Vancouver would be made by boat, not horseback, and the fur traders must await the arrival of the Fort Colvile men who brought down their furs in boats.
Anderson would not be with the fur traders arriving at Fort Okanogan.
The outgoing brigades always sent men on horseback to Fort Colvile, to help the men bringing the boats downriver.
In 1840, clerks Archibald McKinlay and Alexander Anderson were sent by the Dease River trail to Fort Colvile, to join the boatmen travelling south to Fort Okanogan.
It was unlikely they would paddle the boats, and more likely they were placed in charge of a boat, responsible for the men and loads on their downward journey to Fort Okanogan.

When Alexander Caulfield Anderson took charge of Fort Colvile district eight years later, the tiny Fort Okinagan was one of three or four posts under his command.
By that time, the Fort Colvile men were taking their furs to Fort Langley by the Similkameen River brigade trail (which we will speak of in a later posting).
But Fort Okanogan was still occupied, and the man in charge was a French-Canadian named Joachim Lafleur.
In his memoirs, Anderson's son, James, described Lafleur's important position in Fort Colvile's outgoing 1851 brigade, and his fear of snakes:
"Next [after the gentleman leading the brigade] is a superior servant whose duty it is to keep up communication between the officer in charge and the brigade.
"This personage on the occasion of which I write was a French Canadian called La Fleur whose inordinate fear of snakes used to cause us much amusement.
"A dead rattlesnake which my father had one day killed and hung on a bush was the cause of great excitement.
"La Fleur on coming up to it, immediately set spurs to his horse and on his appearing in sight, riding furiously and waving his arms, the natural supposition was that the brigade had been attacked.
"'Un couleuvre monsier' explained the situation....
Posted by Nancy Marguerite Anderson at 2:35 PM