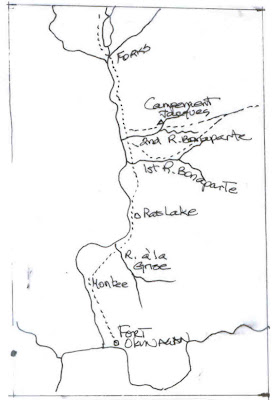 The map above shows the information I have taken from Alexander Caulfield Anderson's 1867 map of British Columbia, which shows Fort Okanogan and the brigade trail leading northward up the Okanogan River.
As you can see, in this illustration the trail does follow the river bank quite closely.
The first information I posted on this piece of the brigade trail came from Anderson's 1858 map, drawn to guide the San Francisco gold miners north to the Fraser River goldfields.
The map was included in Anderson's book, Handbook and Map to the Gold Region of Frazer's and Thompson's Rivers (San Francisco, 1858).
But it was also printed separately and sold to gold miners who wanted to find their way north to the Fraser River gold fields.
The information on the map was taken from Anderson's maps, but I believe that Anderson did not draw this map.
The map was drawn from Anderson's information, by someone who had considerable art skills.
Either the publisher supplied an artist, or Anderson's brother-in-law, William Henry Tappan, drew that map.

The best information on the old Okanogan Trail comes from Judge William Brown's article, "Old Fort Okanogan and the Okanogan Trail," published in the Oregon Historical Society Journal in March 1914.
"A most interesting witness for the company is Mr. Alexander Caulfield Anderson, who had been in charge of the post for a number of years in the late forties and early fifties as a dependency of Colvile," he writes.
"He described the buildings in detail and testified to the value of the whole establishment.
"Among other things he said the stretch of country used for a horse range was in the shape of a triangle, each side of which was about 25 or 30 miles long.
"That it was bounded as follows, commencing at the mouth of the Okanogan River, thence up the Columbia to the Dalles (Box Canyon of the present time), thence along the range of hills to the "montee" on the Okanogan river, thence down the Okanogan to the mouth.
"Now where was the montee?" Brown asked. "No one now living knows as far as can be learned."
As you can see, Anderson's map shows where the montee was.

Do you know what a montee is?
As far as I know, it is a place where the fur traders mount their horses -- sometimes they continued their journey on horseback, and sometimes they did not.
When Anderson left Lachine House (Montreal) in 1832, travelling west to the Columbia district, he joined the Saskatchewan boats at Norway House on June 27th.
He travelled downriver to York Factory and returned with the Saskatchewan boats to Norway House in early August.
The Saskatchewan boats crossed the top of Lake Winnipeg in a heavy rainstorm, taking much risk in making this crossing according to later reports.
They passed through Cumberland House (near Prince Albert, Sask.), and reached Carlton House in early September.
Carlton House was on the North Saskatchewn River near Saskatoon, Saskatchewan.
Upriver from Carlton House they reached the place the fur traders called "La Montee," where the gentlemen left the slow-moving boats in the hands of the voyageurs, and mounted Carlton House horses to hunt the buffalo that roamed in vast numbers over these plains.
Anderson had purchased the best gun he could afford when he entered the fur trade, and here he had the pleasure of shooting a buffalo!

For a few days the gentlemen returned every night to the voyageurs' camp on the river bank, keeping the men supplied with fresh meat from their hunt.
But when they came closer to Edmonton House, the senior gentlemen rode their horses straight across the plains to the fort, leaving the lowly apprentice-clerks behind with the slow-moving boats.

Judge Brown has more information in regard to the brigade trail, taken from the article mentioned above:
"Okanogan Point is the big flat of land at the junction of the Okanogan and Columbia; Ft. Okanogan stood there a long time.
"Okanogan Forks was the junction of the Similkameen and the Okanogan, where Oroville now stands...
"The course of the old Okanogan Trail was up the east side of the river.
"It started at the old fort and kept down along the river all the way till the points of rocks at McLoughlin's Canyon was reached.
"Then the trail climbed up into the gorge known as McLoughlin's canyon, passed through the same and came out on the benches beyond and reached the river bottom again just below the mouth of Bonaparte Creek, near where the town of Tonasket is now.
"Up till about six or eight years ago the old trail was as plain as ever in many places."
It sounds as if the trail disappeared about one hundred years ago.

In his Guide to the Goldfields, published in San Francisco in 1858, Anderson has more information about the old trail.
Remember, he is guiding gold miners north from Grand Coulee to the old Okanogan brigade trail.
"...the trail strikes the Columbia a few miles from the Grand Coulee.
"Ferrying at the fort [Okinagan] (the horse being swum), the trail ascends the Okinagan River, cutting points here and there, as shown in the sketch."
His estimate of distances gives us a bit more information:
"From the Okinagan to Forks of Similk-a-meen: 60 miles."

His "Estimate of March from the Priests' Rapids Crossing to the Forks of Thompson's River," includes this information -- on their sixth day they would reach Fort Okinagan:
On the 7th day, Riviere a la Grise, or Rat Lake;
On the 8th, Upper Bonaparte's River;
On the 9th, Forks of Similk-a-meen.

"It may be noted here that, throughout the distance, there are no obstacles to an easy march, beyond those that I have endeavoured to note.
"Pasture and water are plentiful, and fuel, for the greater part of the distance, likewise abounds.
"Along the Columbia, the country is bare of timber; elsewhere the valleys are clear, the hills sparsely timbered with the Colvile Red Pine (pinus ponderosa)."
Posted by Nancy Marguerite Anderson at 4:09 PM

Labels: on the Okanogan Brigade Trail, The Montee