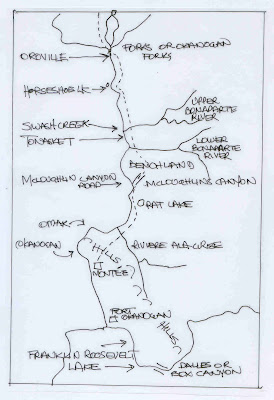 With the help of three old maps and some articles published many years ago in the areas' historical journals, I have put together a rough map of this short section of brigade trail.
Modern day Washington state names appear on the left side of the page, in their approximate locations.
Oroville stands on the east side of the river below Osoyoos Lake; Horseshoe Lake is on the west side of the river.
Siwash Creek appears to be the modern name of the Upper or 2nd Bonaparte River, but I cannot discover the name of the Lower or 1st Bonaparte River from the poor quality maps I have on hand -- it might still be Bonaparte Creek.
Tonasket appears to sit between the mouths of the two Bonaparte Rivers, and the southernmost river might flow down from the benchlands behind the town.
Today's McLoughlin Canyon Road runs up the gulch the fur traders knew as McLoughlin's Canyon -- some names have not changed.
McLoughlin's Canyon was named for Chief Factor John McLoughlin of Fort Vancouver, of course.
The fur traders' Rat Lake is still unnamed; it will be some anonymous little pond close to the river bank, south of McLoughlin Canyon; it does not appear to be Omak Lake.
I think I have said that Omak Lake is southeast of the towns of Okanogan and Omak; possibly it lies on Riviere a la Grise -- which would make that river Omak River or Creek.
The "Dalles" (Box Canyon) southeast of Fort Okanogan appears to lie under Franklin Roosevelt Lake, which was formed by the massive Grand Coulee dam.
I won't really know the exact locations and names of these places until I get a good quality Washington State Land and Forests map.

The book, "Northwest Passage; the Great Columbia River," by William Dietrich, contains some more interesting stories of the Grand Coulee dam, on the Columbia River near old Fort Okanogan.
Folksinger Woody Guthrie was a part of this story.
The building of the Grand Coulee dam was more or less comlete, but support for the building of the irrigation dams along the Columbia River Basin had evaporated.
"The Columbia is certainly a wonderful river," someone said -- "It waters four states and drains forty-eight!"
At the time that Woody Guthrie was brought to view the Grand Coulee Dam, he had not yet written the songs that would make him famous -- "This Land is your Land," and "So Long, It's Been Good to Know You."
It was April, 1941, and he was broke and living in his car with his wife and three children.
The Bonneville Power Administration (BPA) had made a film extolling the virtues of their Hydro projects -- they wanted a folksinger to sing songs that would appeal to the common man.
In the next thirty days,Guthrie drove up and down the Columbia River and wrote twenty six songs, including some of his most famous.
These included, "Roll on Columbia," "Grand Coulee Dam," "Way up in the Northwest," and "Pastures of Plenty" -- some of the most popular songs in the Pacific Northwest.
Guthrie saw that the damns provided jobs for labourers; generators provided power that would allow farmwives to work with electricity rather than kerosene light; and water so that the farmer could irrigate his crops.
His marriage broke up and his car was repossessed, but this was one of the most productive periods of Woody Guthrie's song-writing career.
Posted by Nancy Marguerite Anderson at 5:56 AM