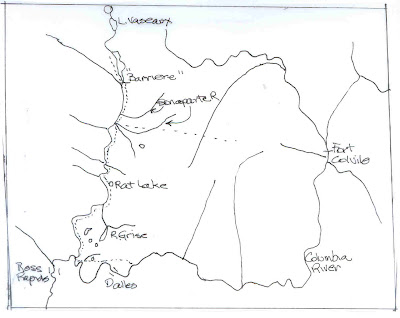 Above I have shown another version of the Okanogan brigade trail south of Osoyoos Lake, leading down the east side of the Okanogan River to the post at the junction of the river with the Columbia.
In this map the brigade trail appears to follow the river's edge much more closely than in Anderson's map.
Vaseaux Lake is at the top, and Osoyoos Lake just south of that.
The word "Barriere" at the bottom of Osoyoos Lake, close to the mouth of the Similkameen River, indicates the presence of a traditional Native fishing weir called by the French-Canadians and fur traders alike a "barriere."
In his 1858 book, Handbook and Map to the Gold Region of Frazer's and Thompson's River, Anderson noted that it was "good policy to supply the chiefs with a little tobacco, to smoke with his followers.
"Good will is thus cheaply secured."

The Canadian Okanagan River was once a beautiful wild salmon stream, with thousands of fish returning every year to spawn in its winding stream and natural gravel beds.
Natives came from miles around to spear salmon in Okanagan Falls, at the south end of modern day Skaha Lake (the fur traders' Dog Lake).
But since the 1920's, the Canadian Okanagan River has been channelled into a system of dams and canals for irrigation purposes.
The Okanagan River Falls were silenced, the river rapids were flooded, and the Native fisheries that existed above McIntyre Bluff died.
South of Vaseaux Lake, the McIntyre dam blocked returning salmon and forced them to spawn in the stream's natural gravel beds near Oliver, B.C.
But these were tough, adaptable fish, and the few thousand salmon who swam the thousand miles from the Pacific Ocean to spawn in this river fought their way up fish ladders built into the nine hydroelectric dams that blocked the Columbia.
Because of these massive dams many other Columbia River salmon runs died, but the salmon who spawned in the Canadian Okanagan River always returned, though in ever declining numbers.
A few years ago Native leaders of the Okanagan tribes worked with the Federal Fisheries Department and the British Columbia Ministry responsible for the river, and raised one million salmon hatchlings for release in the Okanagan River upstream from the McIntyre Dam.
The fish will swim downriver for the Pacific Ocean and return in four years time.
At the end of these four years, these men hope to have a fish passageway constructed where the McIntyre dam blocks the river, to allow the salmon to return and spawn in the upper Okanagan River and Skaha Lake.
The Native men and government officials are also studying the lower part of the river, hoping to move the dikes and allow the river to wander across its natural valley, as it used to do.
It's an exciting project, and when the Okanagan Natives sing to their salmon from the river banks, other people now join them in their celebration.

With thanks to columnist Mark Hume for this story.
It was published in the Globe and Mail newspaper under the title "B.C.'s miracle of the Fishes," Tuesday, May 24, 2005.

As we continue downriver we notice that the trail on this map appears to follow the east banks of the American Okanogan River more closely than shown in Anderson's map.
I also need to clarify something I said on my earlier posting:
It was not Anderson who said that the fur traders passed by Horsehoe Lake and Omak Lake.
These are not old names, but modern names (I think).
But there is probably a good reason for there not being good records of the travels south of Osoyoos Lake -- the gentlemen who led out the brigades rode ahead of their men down the trail and waited for their arrival at Fort Okanogan.
At least in Peter Warren Dease's journal of the Brigade from New Caledonia to Fort Vancouver, 1831, that appears to be the case:
"Got to the narrows of Little Lake Okanagan [Osoyoos Lake] where we found Indians who lent us Canoes to cross the Baggage....
"The travelling from this to the Columbia being fine without any dangerous places, with a view of having Every thing prepared at Okanagan for Embarkation -- I left the Brigade in Charge of Gregoire and with Lolo proceeded to the Fort where I arrived at 2 P.M. and had the pleasure of finding C.T. Black with Mr. Kittson and the Brigade from Upper Posts...."
His own brigade arrived the next day so the journey south from Osoyoos Lake took only one day, and there was only one night's campsite.
Likely this campsite was made at Rat Lake, as this place is especially noted on both maps drawn by the fur traders Anderson and Black.
(The above quotes came from James R. Gibson's Lifeline of the Oregon Country; the Fraser-Columbia Brigade System, 1811-47, published by UBC Press a few years ago -- and the above mentioned Peter Warren Dease was the brother of the John Warren Dease mentioned in my last posting, according to Anderson).
On their return journey the brigade went a short distance from Fort Okanogan and camped because of an accident, and made their second camp on the northernmost Bonaparte River.

Aha! In another journal in this same book (Lifeline of the Oregon Country) I found confirmation that the gentlemen tended to ride ahead of the brigades to Fort Okanogan.
In William Connolly's Journal of 1826, the horses "were allowed to rest at the Little Okanagan Lake [Osoyoos Lake], from whence we proceeded in the afternoon to the Bariere, or entrance of Okanagan river, where we encamped after having crossed the property & horses to the opposite shore...... No danger either by accident, or otherwise, being to be apprehended between this & Okanagan, I left the Brigaede in charge of Messrs. [James] Douglas & Pambrun, and with one Man proceeded for that place where, after a pretty hard ride, I arrived at five o'clock PM..."
On his return journey, Connolly wrote, "This morning I left Okanagan & overtook the brigade at seven oclock -- Mr. Douglas who encamped with it last night was going on as well as could be expected .... After proceeding a distance of about 21 Miles we Encamped near the River de la Guere."
The next day, "at an early hour the Horses were caught & loaded without much trouble, and few of them seemed inclined to repeat the pranks of the two preceding days.... We made today about 22 miles [but no information on camping place.]
The following day, "At four o'clock AM .. we proceeded from our encampment -- passed two Rivulets one of which is distinguished by the name of Bonaparte -- and at eleven reached the Bariere, or entrance of the Okanagan river, which we crossed by means of Canoes we hired from a small party of Indians we found here."

None of these maps tells me where Riviere de la Guere is.
In my French dictionary, the word "guere" translates as "not much," so it is possibly a creek.
By the way, Riviere Grise appears to translate as Grey River, but we might also apply another translation to it -- the verb griser means "to intoxicate."
Is that where the gentlemen handed out the traditional regale, or pint of rum, on the first night of travel?
It was also a tradition that when a brigade left a post they travelled only a short distance before camping, so that if something was discovered missing a man could return to the post to pick it up.
That might explain why their first camp appears to be so close to Fort Okanogan, if their first camp is R.Grise.

But I have wandered away from clarifying my information about Horseshoe and Omak Lake, as mentioned in my last posting.
I believe these are modern names, not names from the fur trade.
The names of the lakes came from a "Table of Distances Between Camps Fort Okanogan, Washington to Alexandria, British Columbia (mileages according to Chief Trader A.C. Anderson), contained in the book about the Okanagan brigade trails, written by Harley R. Hatfield and friends.
In this tables they suggest that the trail was as follows:
From Fort Okanogan to Omak? [their question mark] = 24 miles;
From Omak to Tonasket? (lower Bonaparte R) = 24 miles;
From Tonasket or lower Bonaparte River to Horseshoe Lake? = 25 miles.
Again the question mark after Horseshoe Lake is theirs.
These men tramped all over the Canadian Okanagan in search of the trail, but I don't believe they went south of the border to discover the American section of the trail.
I think they perused the maps they had available -- the same maps I have shown in this blog -- and guessed at the places where the American section of the trail would have been.

After my last week's posting Ted Murray sent me a map that showed Horsehoe Lake, south of Oroville, WA.
It appears to be a loop of the Okanagan River cut off by the river flow, and it is on the west side of the river.
As we know the fur traders followed the east bank of the river we can assume they may have stopped in the area near modern-day Horseshoe Lake, on the banks of the Okanagan River itself.
The town of Tonasket is on the east bank of the Okanagan River, with Siwash Creek to the north and Bonaparte to the south -- it probably sits between the two Bonaparte Rivers shown on the fur traders' maps.
Omak Lake lies well east of the Okanagan river and south east of the town of Okanagan and its airport.
The fur traders left the river bank and rode straight south to cut off the curve of the river to the west.
Of course this trail might have changed its route many times over its years of use, the same way our British Columbia trails have changed.
Is there anyone in the Washington area now exploring and geo-mapping this Okanogan trail?
In British Columbia a great deal of work is being done in preserving our trails, and there is talk in some quarters of forming a Friends of the Brigade Trails organization.
Posted by Nancy Marguerite Anderson at 4:00 PM