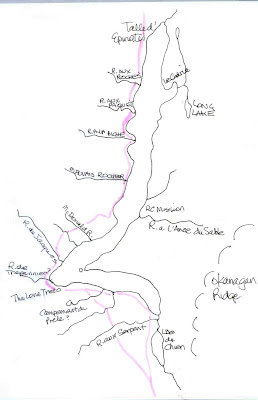 Alexander Caulfield Anderson's 1867 map of British Columbia shows names known by the fur traders for the places along Okanagan Lake.
Few of the names and places remain the same today -- the city of Vernon sits squarely on the land between Long Lake and Great Okanagan Lake; land which the Indian Reserve Commissioners gave to Selixt-asposem's tribe for grazing (mentioned in the last post) -- "Long Lake" on these maps is modern-day Lake Kalamalka and Wood Lakes, merged.
The city of Kelowna stands on the river Anderson called L'anse au Sable, and he indicated where the Roman Catholic Mission once stood on the east side of the lake.
But in James Gibson's book, "The Lifeline of the Oregon Country," L'anse au Sable was where the town of Westbank now stands.
Today's main highway runs down the east side of the lake and rock bluffs almost entirely hide the view.
But there is a road on the west side which allows for splendid views of the lake, and a feeling that you are following along the old brigade trail.
When we speak of the "old brigade trail" in this particular post, we are talking of the trail before 1842.
After 1842 (and exact date of the new trail is unknown, but assumed to be about this time), the fur traders followed a new trail that travelled further west, perhaps on the top of the ridge of hills that lined that side of the lake.
On A.C. Anderson's map the names of the creeks or rivers are sometimes hard to read.
They are also impossible to read on Sam Black's pre-1840 map of Thompson's River (CM/B2079, BCArchives).
But on the Royal Engineers 1861 copy of Sam Black's map (a copy of which was owned by James Douglas), the names of the rivers are easier to read.
This map is in Library and Archives Canada, but you can obtain a rough photocopy of it in BC Archives; its number is P615pBC R888t 1861, Royal Engineers, Thompson River District, British Columbia, from a map in the possession of HE Gov. Douglas, C.B., made in 1836 by S. Black. I have a note its new map number is CM/A294, BCA, so if you can't find it under first number, look there.
Mauvais Rocher has become Bear River -- I should say that Sam Black's Bear River changed to Mauvais Rocher on Anderson's later map.
Bear Creek Park appears to be at the outflow of that same creek, but on the Forest District map the stream no longer bears the name of Bear Creek!
McDonald River, just south of Mauvais Rocher, will have been named for Archibald McDonald (later of Fort Colvile), who spent a few years at the Thompson's River post.
South of McDonald's River is Deer River (on Black's map).
A well-travelled trail followed Jacques River toward the west -- I don't think this was the newer brigade trail but it might have been.
McDonald River is probably where the city of Westbank now stands,
On Black's map R. de Trepannier? (from Anderson's map) is Trepanege(?) River -- still hard to read. But it bears the same name today, and is on the Penticton Forest District map as Trepanier Creek!
South of that is Trout River, a name I could not read on Anderson's map -- I thought it was R. de Fruite and it appears I am right, as James Gibson also calls the creek Riviere de la Fruite (Trout Creek).
Today's Trout Creek appears to flow south-eastward through modern-day Summerland, entering Okanagan Lake at Kikininee Park.
Somewhere where Summerland now stands is Prairie de Nicholas, often mentioned in Alexander Caulfield Anderson's journals.
But on his map, he indicates the resting place as Campment du Prele -- Horse-tail camp -- though it is very hard to read exactly what the writing says. (Horse-tail is a primitive plant the fur traders always called 'Prele').
At the south end of Okanagan Lake is the modern city of Penticton, sitting squarely between Okanagan Lake and Shaka Lake to the south.
Skaha Lake was, of course, the fur traders' Lac du Chien (Dog Lake).
I don't know if any of you want to go out to explore the fur traders trails and camps.
If so, it will be very hard to find them; the population in this part of the Okanagan has exploded and highways and houses have buried any signs of the past.
Posted by Nancy Marguerite Anderson at 12:30 PM