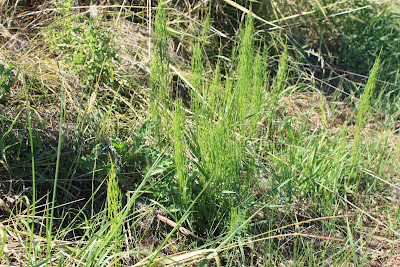 I have spoken before now of the plant that the fur traders' called "prele," and in my last posting I noted that Anderson called a lakeside stopping place along the Okanagan brigade trail "Campement du Prele."
To some of you, horse-tail are familiar plants; but I know that some of my readers live in Australia and have no mental picture of "prele."
The photographs shown in this posting are of those primitive plants, which grow in places where moisture keeps their roots damp -- swamps and creeksides.
The plants shown are small; left alone they will grow two or three feet tall and will cluster in large groups like a small forest.
Forest is a good word for the Horse-Tail; in days when the dinosaurs roamed the earth these plants were primitive trees.

When Anderson made his second expedition up a native trail that followed the Coquihalla River banks, he noted that it was "a broad valley, watered by a considerable stream, which we keep upon our right.
"Country favorable in this part. Pasture about the banks of the main river; wild pea, prele, &c in moderate sufficiency for the temporary sojourn of the brigade."

Anderson's son, James, grew up to become a naturalist and wrote a book called "Trees and Shrubs; Food, Medicinal and Poisonous Plants of British Columbia," (Victoria: Charles F. Banfield, 1925).
He describes this familiar plant in two sections of the book -- first under Food-Plants, and second under Native Medicinal and Poisonous Plants.
"The young tender shoots of the plant just as they appear above the ground are eaten in their natural state," he wrote, "the outer scales with which they are covering being first stripped off. It is composed principally of water and has no particular flavour, except a slight sweetish taste."

But in the later section of the book (Poisonous Plants) he noted that "it has been reported to me as poisonous to horses in the East, and similar reports have come from England.
"Experience in this country is not confimatory of these reports; the Horse-tail, or, as it is called by the French-Canadians, "Prele," used to be considered excellent horse-feed, and when possible the Hudson's Bay Company's brigades were halted where it was abundant." 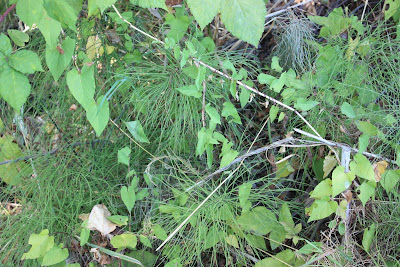 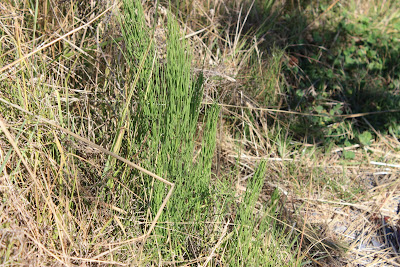 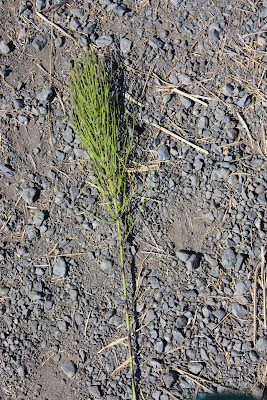 My next posting will involve a bunch of mapping and a little research, which always takes time. If I manage to finish it by the end of the day I will post it -- otherwise you may have a small wait.
Thanks for your patience.
Posted by Nancy Marguerite Anderson at 9:23 AM