The Okanagan Brigade Trail after 1843 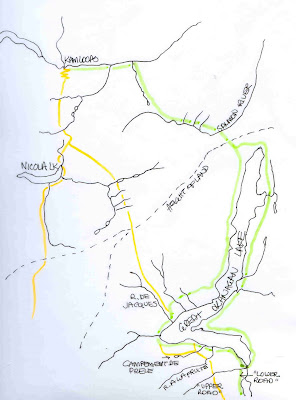 Above is a larger view of the country between the Kamloops post and the Great Okanagan Lake of the fur traders.
Drawn in green you will see the old brigade trail we have followed in the last few postings, as it travels eastward along the South Thompson River before crossing the height of land to Monte Lake, Salmon River, and Okanagan Lake.
This time I have also included some of the other trails that the fur traders might have used, on the east side of the lake.
But the brigades always travelled up and down the west side of Great Okanagan Lake.
Where Riviere a la Fruite or Trout Creek flows east into the lake is the modern town of Summerland, B.C., which sits squarely on the old Prairie du Nicolas.
This map is copied from Anderson's 1867 map, and you will notice that both the "upper road" and the "lower road," closer to the banks of the river, are noted.

The new trail followed the north bank of Riviere de Jacques (now Trepanier Creek) to the west, passing over the height of land and following Nicola River to pass north of Lac du Nicolas, or Nicola Lake.
(Note: the name Trepanier Creek seems to have been applied to a few creeks in this area over the years; Peachland Creek also sometimes carries this name)
The men rode over the height of land and down the other side, by switchbacks as indicated, to Kamloops.
The trail that leads southward past Nicola Lake is the later brigade trail over the Coquihalla mountains, that replaced the Okanagan brigade trail entirely in 1849.

By the way, the new Okanagan brigade trail passes quite closely to Douglas Lake, where, by 1913, Chief John Chilliheetza had his home.
Chilliheetza is the modern spelling of Tsilaxitsa's name, and Chief John would have been a direct descendent of Tsilaxitsa.
It would be interesting to know whether Chilliheetsa's ancestor, Tsilaxitsa, chose to build his home on Douglas Lake, close to the Okangan brigade trail.
Posted by Nancy Marguerite Anderson at 3:56 PM