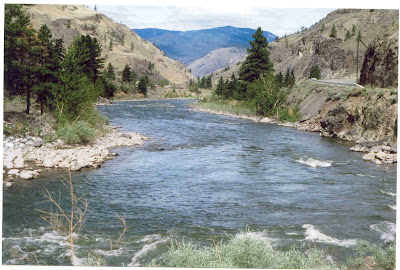 In summer of 1847, Alexander Caulfield Anderson and five of his Fort Alexandria men left Kamloops on horseback, crossing the hills south of the fort into the Nicola Valley. Anderson hoped that they would find a new brigade trail to Fort Langley, on the lower Fraser River. 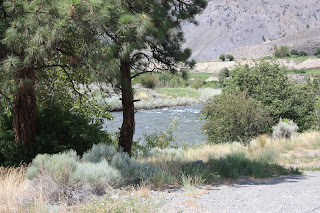 On May 21, the explorers followed the well-used native trail to the usual ford that crossed the Nicola River west of the lake, but found the river too high to cross.
Anderson had intended to follow the native trail across the valley to the place where the Nicoamen River flowed into the Thompson, but because of the flooded river, he was forced to follow its north bank all the way to its junction with the Thompson. 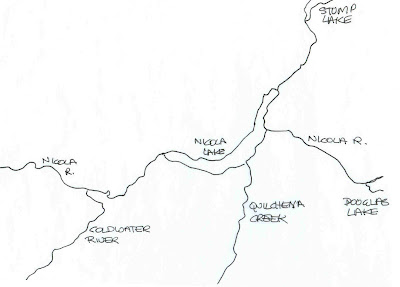 In above map, Nicola River to the left of the map leads northward to the shores of the Thompson River. In 1847, Anderson rode south from Kamloops by Stump Lake and Stump Creek to Nicola Lake, then along the north shore of the lake to the place where the Nicola River flowed west out of the lake.
By the mid-1840's it seemed as if most of the fur trade trails to the south of Kamloops passed through the Nicola Valley.
Alexander Caulfield Anderson passed through this valley in two of his four explorations, and both the Coldwater River valley and the Quilchena-Otter Creek routes formed part of the later brigade trails.
Not only that, but at some point the portion of the Okanagan brigade trail through Monte Lake and Creek was abandoned for a new trail that led through Douglas Lake into the Nicola Valley. 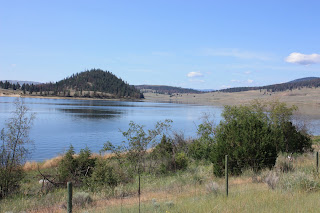 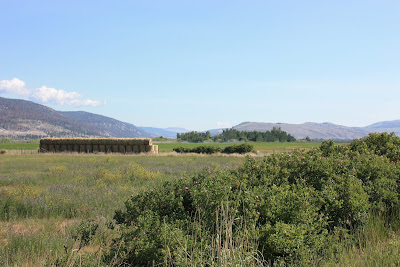 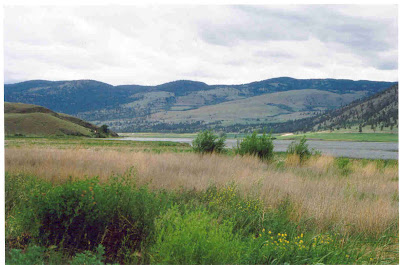 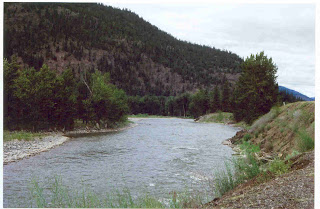 From the east end of the Nicola Valley, the Nicola River flowed in from Douglas Lake. At this point the river is much larger than the smaller Nicola River flowing out of the west end of the lake. Sometime before 1843, the fur traders abandoned the part of the brigade trail through the Okanagan and, instead of travelling through Monte Lake, took a trail that led them from the shores of Okanagan Lake up the "Riviere de Jacques," following the height of land north of Nicola River and Douglas Lake (probably passing through Jack's Lake) to reach Kamloops by Stump Lake.
The large photograph above shows the Nicola Valley, looking west along the valley and lake from its east end.
The smaller photograph is of the Nicola River where it flows into the east end of Nicola Lake from Douglas Lake. 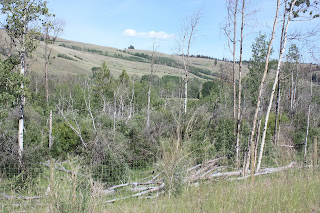 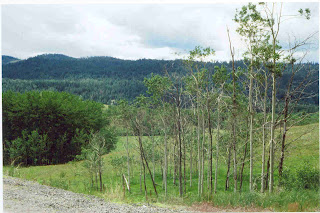 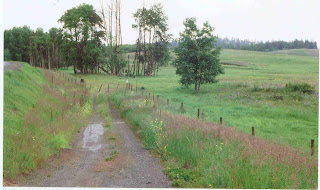 The Similkameen was the area around Red Earth Forks (modern day Princeton) and Otter Lake, where the native chief Blackeye had his camp.

In 1846, Alexander Caulfield Anderson explored the Nicolum River (see posting, June 25, 2009) as far as modern-day Rhododendron Flats (see posting, July 25, 2009), and climbed the mountain range to the north. From the top of the Coquihalla range Anderson followed the Tulameen River canyon south to the Similkameen, where he ran into Blackeye and his son-in-law.
Blackeye told Anderson of an easier route up the mountains and, a year later, the son-in-law showed the furtraders one of many native routes over the mountains.
In 1849 the incoming New Caledonia brigade used this trail for the first time, and passed over it so successfully that, for years, it served as the main route between Kamloops and Fort Langley. The above shots show the country that the fur traders rode through coming north from Blackeye's camp, following Otter Creek and Quilchena River toward Nicola Lake. (This area will be covered more fully in a later posting.) 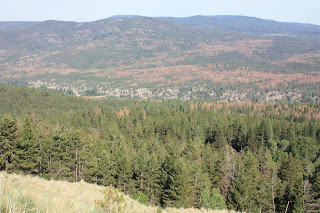 Southwest of Nicola Lake is the Coldwater River Valley. Anderson's 1847 exploration from Fort Langley brought him up the Anderson and Utzlius Rivers to the Coldwater River and, eventually, to Kamloops.
Anderson thought that, with a little work, this trail would make a good brigade trail.


In 1848, the outgoing New Caledonia and Fort Colvile brigades were forced to use this trail before it was fully prepared for horses, and they had a disasterous journey to and from Fort Langley. On August 22 they arrived at Kamloops, with no one in a good mood. Thirty five horses (or more) had been lost or killed, and 14 bales of goods had gone missing. The gentlemen had a meeting, and Donald Manson condemned the route as impassible, while Anderson agreed that it appeared more rugged by horseback than it had been when he travelled it by foot the year before. At last, Anderson saw there could be no agreement, and suggested that the brigades use Blackeye's Trail over the mountains to the Coquihalla River -- the trail he had partially explored in 1846.
The photograph above shows the Coldwater River valley from the mountains to the south.
The photograph below is shot from the same place, and looks toward the Nicola Valley (and modern-day Merritt) from the Coquihalla heights. 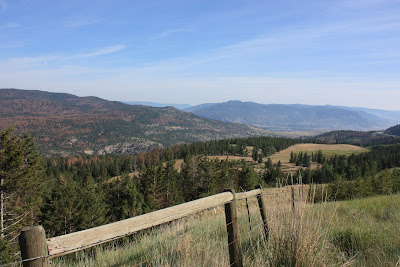 Posted by Nancy Marguerite Anderson at 10:33 AM