Native Bridges in the Fraser Canyon 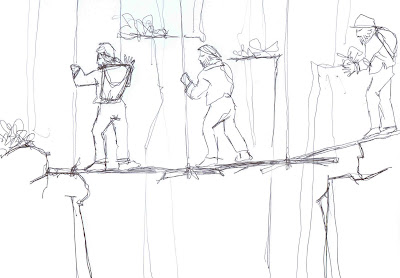 At Fort Alexandria, the first days of April 1847 came in pleasant and warm, though snow still lay on the ground. On April 23, Montrose McGillivray arrived at the fort with dispatches from Peter Skene Ogden, asking Anderson to explore the Fraser River canyons to Fort Langley. Anderson set off from Kamloops on May 19th. With him travelled McGillivary and 4 Fort Alexandria men: Edouard Montigny, Theodore Lacourse, Michel Fallardeau, and Joe Desautels.

This was Anderson's third exploration to Fort Langley, and this year his path led him over the hills south of Kamloops to the Nicola Valley. Anderson had planned to follow a familiar trail to the Thompson River by way of the Nicomen, but high water prevented him from crossing the Nicola River. Instead, he followed the north bank of the Nicola to its junction at Thompson River, at modern-day Spences Bridge.

The explorers borrowed canoes from the natives, and crossed the Nicola River. They then walked down the south shore of the Thompson River to the mouth of the Nicomen. There Pahallak met them. This native chief had been sent up the Fraser River by Fort Langley's James Murray Yale, to guide Anderson's party downriver by their native trails.

Pahallak led Anderson's party to the Fraser River and down its rocky east bank. They crossed one flooding river well above its usual ford on a log; to return to the river mouth they scaled the edge of a cliff "with the aid of along withe of plane, fixed there permanently by the natives for the purpose," according to Anderson. This first passage by native bridge may not have appeared difficult, but it was nothing to what Anderson's party would face downriver.

By May 28, the explorers were just north of modern-day Yale, on the west side of the Fraser River. Between them and Fort Langley were forbidding cliffs that rose straight from the rapid-filled river, and the native bridge they were expected to cross.

Their native guides led the six men up the cliffs by a stony path, to a "dangerous causeway of cedar boards connecting the several projecting points of a precipice." What Anderson didn't mention was that these boards were poles that rested one end on the broken rocks of the narrow trail, while the other end was suspended above the river by deer-hide ropes from the overhanging cliffs. The suspended end of the board was joined to one or more cedar poles, some suspended from the cliff by ropes and some resting on rocks. The natives crossed their flimsy bridges by clutching the rock-face and inching their way across, knowing that one false step would cause the poles to sway and dump the traveller into the foaming rapids below.

Thirty years earlier, Simon Fraser had ventured over similar bridges, and noted that his men "had to pass where no human being should venture." Anderson and his five men made their crossing in safety, and followed the rocky trail to solid ground. This was the last barrier. At the village immediately south of the native bridge, the explorers borrowed a canoe and paddled their way to Fort Langley.

In 1848, the natives carried many of the furtraders' supplies upriver by these trails rather than use the Douglas portage, and most of the goods arrived in good order. Ten years later, the American goldminers used these same native bridges to find gold upriver. These bridges may only have fell into disuse when Fort Yale and Fort Hope opened and there was no longer any need for them. Certainly, Anderson didn't travel over the bridge for a second time.

For another image of these bridges, see: Stephen Hume, Simon Fraser, in Search of Modern British Columbia (Harbour, 2008), p.267
Source: A.C. Anderson, Journal of an Expedition to Fort Langley via Thompson's River, Summer of 1847, PABC
Posted by Nancy Marguerite Anderson at 8:20 AM