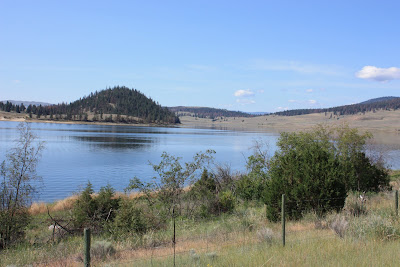 From Nicola Lake, the furtraders reached the Thompson's River (or Kamloops) fort by crossing the highlands between the Nicola valley and the Kamloops Lake valley.
It's beautiful country -- grass-covered hills with numerous small lakes nestled amongst them.
The photograph at the top of the page shows Stump Lake.
The second photograph is of Rock Lake, and the hill behind is called Brigade Hill.
The third photograph was taken at the top of the highlands, and shows the bare country the trails led through.
It was an easy journey from Nicola Lake to the Kamloops post, and in Anderson's various journals he hardly mentions the country.
For him and other furtraders, the highlands were always the easiest part of the journey and, homebound at least, meant they were approaching the comfort of the Kamloops fort.
In 1847 Anderson left Kamloops at 10 o'clock and camped that night at the west end of Nicola Lake. On his return journey the men left the west end of Nicola Lake (probably about 4 am.) and arrived at Kamloops at 2 pm.
The only time Anderson ever mentioned this country was on his return from his 1846 exploration, when he wrote: "Leave San Poila River and strike across through a beautiful country to Kamloops, where we arrived at 6 1/2 pm." (Return trip, Journal of an Expedition..., A/B/40/An3.1, PABC) 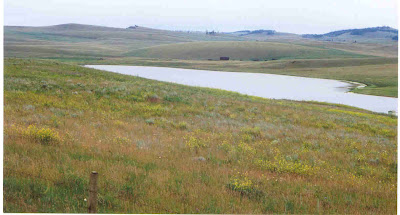 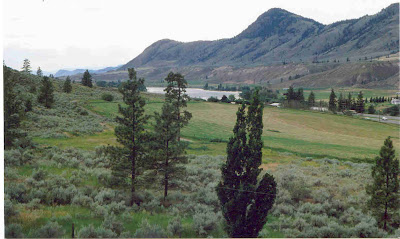 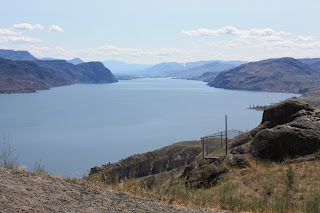 The photograph above is an older photograph showing Kamloops Lake as viewed from the highlands the fur traders rode over to reach Kamloops.
The old Thompson's River fort -- and the newer Kamloops fort which replaced it in 1843 -- stood at the forks of the North Thompson and South Thompson Rivers, at the right-hand edge of this photograph (or maybe even outside the photo).
The second photograph is a more modern photograph and shows Kamloops Lake from its south shoreline. The Kamloops fort stood on the banks of the rivers that flowed into the lake at its east end -- about where the plume of smoke in this photograph rises.
Below is a map of Kamloops Lake, with Thompson's River post on the east side of the North Thompson River (before 1843) and the Kamloops fort on the west side. Chief Trader Sam Black had been in charge of the Thompson's River post for many years, but when he was murdered, Chief Factor John Tod took over the posting.
Though Sam Black was the man who explored and recorded many of the native trails in the area, John Tod was the man most responsible for the placement of the new brigade trail between the new Kamloops fort and Fort Alexandria to the north.

The photographs below are of Kamloops Lake from its south bank, and they scan from the west end of the lake (near modern-day Savona) to the east.
You will note that on the above map I have indicated Copper Creek, Deadman River, and Criss Creek. After 1843 the brigade trail between Kamloops -- now in its new position on the west bank of the river -- and Fort Alexandria led along the north bank of Kamloops Lake to Copper Creek.
The horses of the brigade followed Copper Creek north to Carabine Creek, and crossed a ridge or two to Criss Creek.
They then crossed Criss Creek and trotted over another height of land to enter the valley of the Deadman River by a series of switchbacks down a steep hill.
The new brigade trail between Kamloops and Fort Alexandria was first travelled by the brigade in 1843.
Before that time the incoming and outgoing brigades had travelled across the Thompson Plateau to the North Thompson River, then south on its east bank to the Thompson's River post on the east side of the river.
The relocation of the Thompson River post to the west bank of the river coincided with the opening of the new brigade trail from Fort Alexandria, and was a more convenient location for everyone involved in the fur trade.

This is a view of the west end of Kamloops Lake taken from its south shore.
The furtraders "Thompson's River" flows out of the lake's west end through a series of almost impassible canyons.
North and west of the lake is Deadman's River and the brigade trail to Fort Alexandria, after 1843.

This photograph is slightly to the east of above photo, and we are looking across Kamloops Lake toward Copper Creek, on its north shore.
The canyons of the Thompson River were, for many years, the only barrier between building a brigade trail between Kamloops and Fort Alexandria that avoided the Thompson Plateau.

Once the easy access up Copper and Carabine Creeks was discovered, there was little to prevent the furtraders from using this route as their new brigade trail.
Picture 150 loaded packhorses and their outriders following the trail from Kamloops along the north shore of this lake, and disappearing into the fold in the hills that is Copper Creek.

The normal New Caledonia brigades consisted of many strings of horses, with each string of seven or nine horses in the care of two men.
At the head of the brigade rode the gentleman-in-charge, and immediately behind him came the employee assigned the duty of keeping up the communications between the gentleman and the various brigades that followed.

Behind the gentleman and the horses that carried his luggage trotted the horses of the provisioning brigade.
On arrival at camp at night, the two men of this brigade unloaded their goods and lit the fires that cooked the men's suppers.
Then they erected the leather tents that the gentlemen slept in, and made their beds.

Behind the provisioning brigade came the strings, or brigades, of horses.
Each horse carried two 90-lb packs, or 180 lbs. of trade goods.
Loading the packhorses began at 4 o'clock in the morning, and it would take five hours to make all the horses ready.
The brigade travelled about 15 miles a day, and the pack day, or hitching, ended before dusk so that the men could set up camp in daylight.
Travelling in a brigade was dusty and noisy, with the songs or curses of the employees, and the bells of the horses.
Posted by Nancy Marguerite Anderson at 3:05 PM