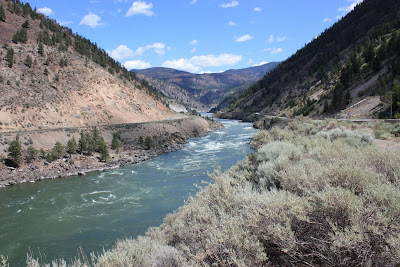 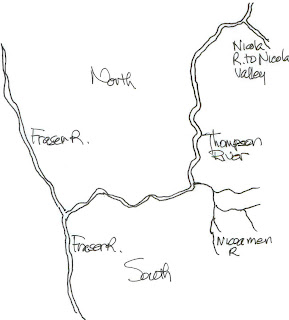 The map to our left shows the Thompson River between the Nicola River and the Fraser. To the north-east is Kamloops Lake; and the Kamloops post stood at the east end of that lake. The Black Canyon which blocked the river between Kamloops Lake and the mouth of the Nicola made travel down that part of the Thompson River extremely difficult (if not impossible), and all the native and furtraders' trails in this area were designed to avoid that section of the Thompson River.
On the morning of May 19, 1847, Alexander Caulfield Anderson set out on his third journey across or around the mountains that lay between Kamloops and Fort Langley. From Kamloops, Anderson and five employees rode their horses over the hills south of Kamloops, to the Nicola Valley.
From Nicola Lake, Anderson and his men planned to ford the Nicola River and take a native trail that led across the valley directly to the mouth of the Nicoamen River. This trail would bypass the rough banks of the Thompson River south of its junction with the Nicola. 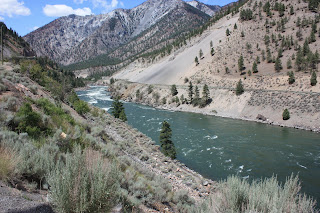 At any rate, this was the trail not taken. The explorers camped a few miles from the junction of the Nicola with the Thompson, and began again early the next morning. By 7.30 the next morning the explorers had reached the junction of the Thompson and Nicola River, and Anderson sent his horses back to Kamloops with their guides. The explorers crossed the Nicola River in canoes borrowed from the natives who lived nearby.
From this point, Anderson led his men on foot along the rocky shores of the river's south bank. The Thompson foamed with white-topped rapids as it flowed swiftly past them, and the air grew hot and sultry. 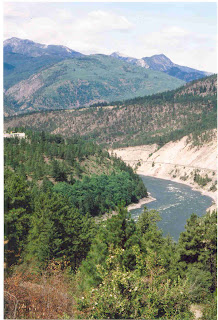 Though their path led up and down the hills of the uneven river bank, Anderson thought it suitable for horses. At the end of that sultry hot day, the tired men of the exploring party camped on a hill close to the banks of the Nicoamen River.
They started off before four o'clock the next morning, and crossed the mouth of the Nicoamen on a fallen tree. The day was hot, and they walked past many rapids before stopping to enjoy the first meal of the day, close to the place where the Thompson River forced its way through a narrow channel into the Fraser.
Here Pahallak, the native chief who had acted as Anderson's guide the previous year, joined the party. With Pahallak travelled a large group of natives who Anderson described as a "scampish looking set of vagabonds." As usual, when Hudson's Bay men met a group of natives, everyone shook hands until their wrists were sore.
The remaining photograph is of the Thompson River between Nicoamen and the river's junction with the Nicola River, where modern-day Spences Bridge now stands. North and east of Spence's Bridge the Thompson River was confined in a narrow and rapid-filled canyon that no one chose to travel. 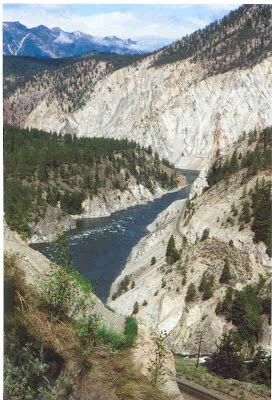