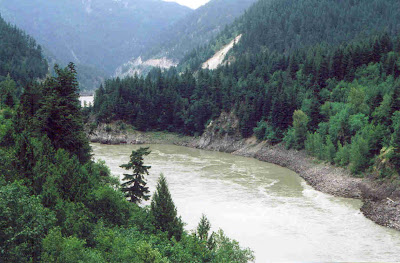 The above photograph shows the Fraser River looking north from modern-day Alexandra Bridge, toward the old bridge (shown in dotted lines on the map below), and the location of the native village of Kequeloose. The steep slope on the east bank is the base of Lake Mountain. 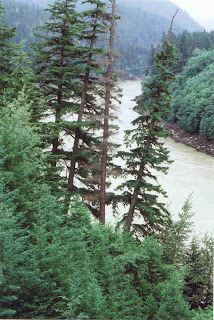 In the summer of 1847, Alexander Caulfield Anderson's exploring party made their way upriver from Fort Langley, travelling in two canoes.
On his way downriver earlier the same summer, Anderson's party had been guided over the trails that led over Lake Mountain -- trails the natives used to avoid travelling down the Black Canyon with its narrow, rapid-filled canyon.
From the top of Lake Mountain, Anderson had walked to the edge of the bluffs to view the foaming river below.
"I struck off the road to take a birds-eye view of a rapid which obstructs the navigation near this spot..." he wrote in his journal. "Judging from the agitated appearance of the stream as seen from our elevated position, this rapid is a succession of dangerous whirlpools, apparently unnavigable, and I am informed unavoidable by portage."


The photograph above was taken from the old Alexandra Bridge, looking downriver (south) toward the modern-day Alexandra Bridge. We are on the east side of the Fraser River, and behind the photographer is the place where the native village of Kequeloose once stood. 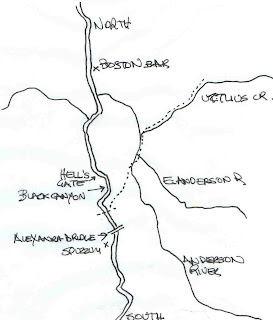 Anderson's party reached the native village of Kequeloose at 11 o'clock on June 4, 1847. The above map shows the area we are speaking of -- the area betweeen modern-day Alexandra Bridge and the town of Boston Bar. Lake Mountain stands on the east side of the river, and Gate Mountain to the west, and these two mountains force the Fraser River into its narrow, steep canyon. The world famous Hell's Gate is in this part of the world, as is the canyon that Anderson viewed from the top of Lake Mountain -- Black Canyon.
Anderson's intentions were to return to the native village of Squa-youm (near modern-day Boston Bar), by re-crossing this mountain. Once he had climbed the long, steep hill behind Kequeloose and crossed the flat top of Lake Mountain, Anderson and his men would clamber down the bluffs on its north-east edge and descend into the gully of the Anderson River.
At Kequeloose the men hid the Northwest canoe in the bushes for their native guide to find and return to Fort Langley. Then Anderson distributed axes to all hands, and everyone chopped down trees to clear a wide path that zigzagged up the hill behind Kequeloose.
The photographs below are of the actual brigade trail leading from Kequeloose up the "Big Hill" to the plateau of Lake Mountain. 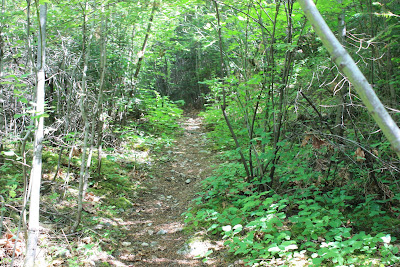 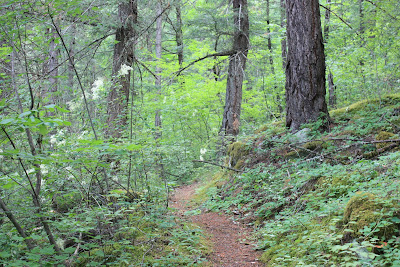 That evening, Anderson and his men set up camp at the top of the hill that overlooked the rapids and whirlpools of the Fraser River canyon. 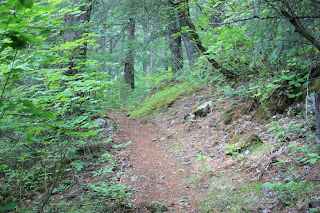 On June 6, the men descended the other side of the plateau and began their climb up the hills behind Squa-youn. For two days the explorers carved their trail up the series of hills that led them toward the Nicola Valley. On the third day they hit lightly wooded hills, and Anderson instructed his men to mark the trail with blazes to indicate the approximate route.


At this point, a native youth who had believed their path was to lead him to the junction of the Thompson River with the Fraser, realized he was being taken a different way. In a burst of rage, he grabbed a fur trader's gun and tried to remove its leather covering to fire it. 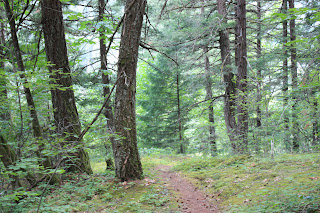 While the Company men stood with their guns in their hands and their eyes on the natives, Anderson and Edouard Montigny cautiously advanced on the youth to removed the firearm from his hands. The young man hesitated, and, seeing that the other natives did not support him, surrendered the gun to Montigny.

This was not the end of the story, and the young man gave the fur-traders more trouble a short time later. The incident, however, shows the kind of man Anderson had to be to lead his voyageurs where he wanted them to go. In his various journals of exploration, there are a number of occasions where Anderson risked his own life to lead his men through dangerous situations.