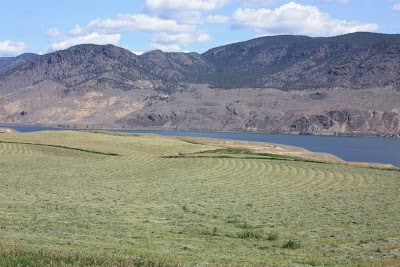 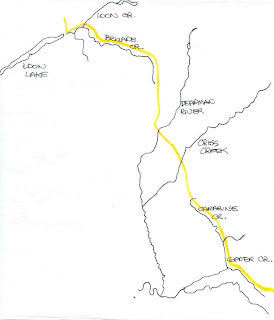 From Kamloops, the brigaders heading toward Fort Alexandria rode along the north shore of Kamloops Lake until they reached Copper Creek.
Somewhere, in one of those folds of the hills across the lake, is the creek named Copper Creek for a vein of copper the natives discovered.
Where Copper Creek swung eastward, another river flowed in (Carabine Creek), and the brigaders followed to the third lake, where they set up camp.
Anderson's map indicates that the camp was known as Camp a la Carabine.
He also noted that as the brigaders left the shores of Kamloops Lake to ride up Copper Creek, they passed through the northern edge of rattlesnake territory.
According to Alexander Caulfield Anderson's map of the brigade trails, Criss Creek was known as Riviere a l'eau Claire.
When I ventured to Criss Creek, I thought that the brigades followed Criss Creek down its busy streambed to the Deadman River.
They did not.
The brigaders crossed Criss Creek well above the place where it flowed into the Deadman River, and climbed over a second height of land.
The trail finally crossed the Deadman River well to the north of Criss Creek, at a place where they had to build switchbacks down the hillside to reach the river.
These switchbacks are clearly marked on Alexander Caulfield Anderson's 1867 Map, which as of June 2009, is available to researchers.
For years, this map was hidden away in a darkened room in the depths of the archives storage, and almost no one saw it.
When I asked to see the map earlier this summer, the archivist talked for half an hour on the importance of this map for British Columbians.
The archives staff scanned a copy of it in 2008, but because it was still sealed in its mylar (plastic) envelope the copy came out unfocused and with a blue-ish cast.
Because of requests (mine and others), the archives staff carefully removed the map from its mylar envelope and scanned a permanent copy into their computer system.
Everyone can now own a copy of this map, but it will cost you. 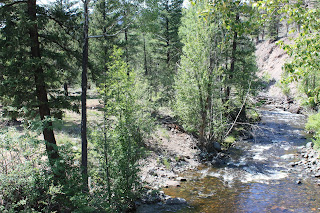 To our right, Criss Creek.


Below is a photograph of Deadman River, looking toward Kamloops Lake to the south.
This photograph was taken well south of Criss Creek, and I don't have any photographs of the portion of the river that the brigade would have crossed.
However, I think the river would look much the same as in this photograph -- except that it was less open and its banks were bordered by bigger hills. 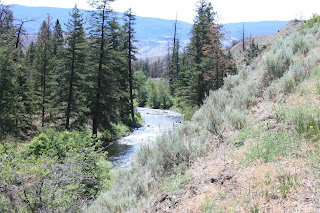 Deadman River, to our left.


The photograph below shows the bottom of Loon Lake, and includes a view of the hill that the brigade circled around (see map above). 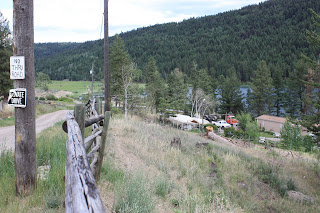 In his unpublished manuscript, British Columbia, (Mss. 559, PABC) Anderson described the country the brigade trail passed through with these words: "Beautiful prairies, bordered by lofty hills sparsely scattered with timber, stretch around. ... Groves of the Aspen appear here and there. The Balsam Poplar shows itself at intervals only, along the streams. The white racemes of the Service-berry flower, and the chaste flowers (blossoms) of the Mock Orange, load the air with their fragrance. Every copse re-echoes with the low drumming of the Ruffed Grouse; the trees resound with the muffled booming of the Cock of the Woods. The "Pheasant" whirrs past; the scrannel-pipe of the larger Crane -- an ever watchful sentinel -- grates harshly on the ear; and the shrill whistle of the Curlew as it soars aloft aides the general concert of the re-opined year. I speak still of Spring; for the impressions of that jocum season are ever the most vivid, and naturally recur with the greatest force in after years."
When my sister and I visited Loon Lake, we were delighted by the many little creatures that popped out of the cattle guards to whistle at us.
They are a marmot, apparently, but not the yellow-bellied marmot. There are 40 or more breeds of marmot in the province, and I would be delighted if someone were able to identify these comical creatures for me.
The bottom photo is of the end of Loon Lake, where the brigades would have set up camp for the night. Imagine the gentlemen riding in and dismounting from their horses; the provisioning brigade lighting the fires and putting the food on to cook.
The hard-working horses would be set loose to roll in the grass, before being hobbled for the night.
As evening falls, the men sit around the fires, smoking and talking. Then they roll themselves up in their blankets and sleep on the ground.
They would begin work early the next day -- at about 4 o'clock in the morning. 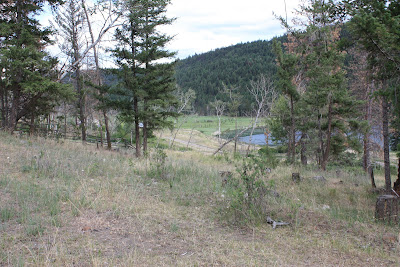