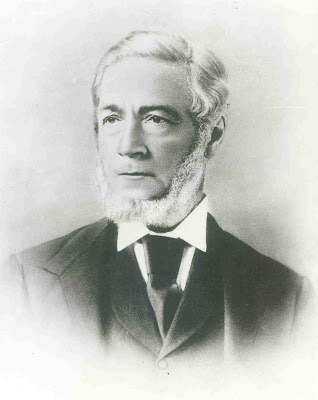 The photograph above is of Alexander Caulfield Anderson, and is said to be taken about 1880 when he was about 65 years old.
I have used this photograph with the permission of the Provincial Archives of British Columbia, and its Call No. is A-01075.
As you can see, his hair was white though his brows still appeared dark.
Even after his retirement from the Hudson's Bay Company, Anderson maintained an occasional correspondence with Governor George Simpson.
In March 1857, Anderson wrote: "I am happy to say that my family are well; and I know it will interest you to learn from me -- though in such case possibly a partial witness -- that my children conduct themselves in such-wise as in no way to dishonor the grizzled crown with which Time is liberally endowing me." (D.5/43, fo. 284, HBCA)

There are very few contemporary descriptions of Alexander Caulfield Anderson in written records.
On June 21, 1824 at the mouth of the Stikine River, W. H. Tolmie described a native chief who stood in front of him, with a reference to his good friend Anderson:
"...he is a tall well-formed Indian, rather corpulent but that adds to his dignity of deportment -- countenance on the grecian model, encircled by flowing locks of jet black hair, bushy whiskers, mustachios and beard of the same hue -- his dress a fox skin robe -- he looks somewhat like Colonel Anderson, but his features are larger -- is forward and presuming."
This suggests that Anderson had a dignified and perhaps military posture, and he had allowed his hair and beard to grow long on the sea-voyage to the Northwest coast -- not surprising.
Certainly Anderson was never corpulent, and certainly not so at that young age (20 years old).
This reference was found in book, Tolmie: Physican and Fur trader; the Journal of Dr. Tolmie, ed. Howard T. Mitchell, Mitchell Press, 1963.

In 1878, the San Francisco historian H. H. Bancroft arrived in Victoria to research the history of the territory, and interviewed many retired Hudson's Bay men.
Bancroft wrote of Anderson: "In personal appearance, at the time I saw him, he being then sixty three years of age, Mr. Anderson was of slight build, wiry make, active in mind and body, with a keen, penetrating eye, covered by lids which persisted in a perpetual and spasmodic winking, brought on years ago by snow-field exposure, and now become habitual, and doubtless as disagreeable to him as to his friends. In speech he was elegant and precise, and by no means so verbose as in his writings, and in carriage, if not so dignified as [Roderick] Finlayson, his manner would do him credit at St. James."
This quote comes from a footnote on page 159, The Works of Hubert Howe Bancroft, vol. 32, History of British Columbia.
I understand that Alexander's older brother, James, had the same tic in his eye.


James Anderson A was Alexander Anderson's older brother by two years, and he, too, joined the fur trade in 1831.
As he travelled across the Atlantic Ocean to Hudson's Bay and Moose Factory, where he was posted, he wrote a desription of himself in the front of his journal.
James Anderson -- then about 19 years old -- described himself as weighing 150 pounds, and standing just short of 6 feet tall.
There is no such description of Alexander Anderson, but later photographs show a lean, long-legged man who towered above his companions.

But by the time those photographs were taken, Alexander's hair had already turned white.
James' photographs and portraits taken in later life show a brown-haired, blue-eyed, man; Alexander's wavy hair was probably medium-to-dark brown in his youth, and his eyes might have been blue, like his brother's. 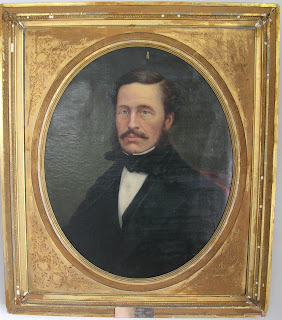 The portrait above is of James Anderson A, Alexander Anderson's older brother; it is in the collection of the Georgina Pioneer Village, Keswick, Ontario, and they have allowed me to use it on this site.
A short version of James Anderson's biography can be found on this site, date July 26, 2009 -- "James Anderson (A), HBC."
To learn more about this man, look at the Georgina Pioneer Village's celebrations of James Anderson's life -- Exploring James Anderson: A Journey through the Adventurous Life of a Company Man -- online at virtual museum.ca.
I find it the lazy way, by googling "Alexander Caulfield Anderson."
You can find more information on James Anderson's journey to the Arctic Ocean in the Beaver Magazine, vol.310 [Spring 1980], Eric J. Holmgren, "The Diary of J. G. Stewart, 1855; Describing his Overland Journey in Search of the Franklin Expedition."
Copies of his many journals are in the Provincial Archives of British Columbia, as are many original letters written to his brother, Alexander.
Posted by Nancy Marguerite Anderson at 4:56 AM