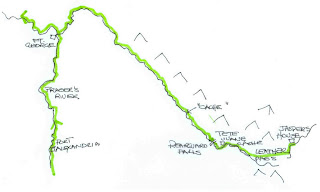 In fall 1835, young Alexander Caulfield Anderson was sent from Fort George (New Caledonia), up the Fraser River to pick up the leathers that would be stored at Tete Jaune Cache.
Peter Skene Ogden had placed him in charge of eight voyageurs in two birchbark canoes, and he was to travel across this unfamiliar land to the base of the Rocky Mountains, and return before winter set in.
They expected this to be a short trip up and down the Fraser River.
It was not. 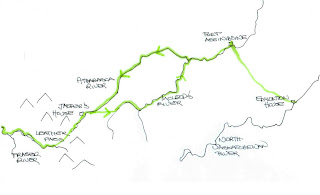 The straight-line distance between Fort George and Jasper's House (east of modern day Jasper, Alta.) is about 190 miles.
The fur traders found no leather stored at Tete Jaune Cache, and walked across the mountain pass to Jasper's House.
When the leather arrived with the express ten days later, the fur traders made their way west to the Fraser River.
But an early winter had arrived, and snow lay deep in the mountain pass and the Fraser River was beginning to freeze.
In the area near modern-day McBride, B.C., Anderson's canoes were finally frozen into the ice that covered the Fraser River.
The party dried and cached their leathers, and considered their options.
Though their native guide wanted to return to Fort George, Anderson led his party on foot toward Jasper's House, to the east.
They were starving when "... suddenly we fell in with a herd of reindeer, only one of which we shot, and thus from hand to mouth we at length reached Jasper's, under the light of a full moon at midnight, about a fortnight after turning back."

There was no food to spare at Jasper's House, and the party made their way on foot down the Athabasca River to Fort Assiniboine.
One group, which included Anderson, attempted a short cut across country to Edmonton House -- a route so difficult that when they reached McLeod's River they walked its frozen surface north to the Athabasca again.
The straight-line distance between Jasper's House and Fort Assiniboine is 160 miles; it is another 75 miles to Edmonton House.
They made Edmonton House in late November, half starved and half frozen.

In early December, Anderson and a few men retraced their steps toward the Athabasca and Jasper's House, this time with seven sledges drawn by three dogs apiece, that carried 300 pounds of pemmican.
In six days Anderson's party crossed the portage to Fort Assiniboine.
Two weeks later they reached Jasper's House, where they celebrated their Christmas early and had a day's rest.
Eight days after they left Jasper's, the party reached Tete Jaune Cache and proceeded down the Fraser River on its icy surface.
Twelve days later they saw their first sign of life when, shortly before they reached Fort George, they met the men who had been sent out to find them.

Over the this winter and on this one trip, Anderson walked across the Rocky Mountains between Tete Jaune Cache and Jasper's House four times -- even when they travelled by dog sled they took turns going ahead and breaking the trail for the dogs.
"I have mentioned this incident at some length," Anderson wrote in his History of the Northwest Coast, "because it will serve to convey some idea of the difficulties and privations which the officers and servants of the Comp[anie]s had freqently to undergo in the prosecution of their duties."
Posted by Nancy Marguerite Anderson at 11:57 AM