Up the Fraser River to Fort George 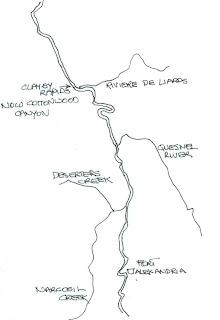 On the map to the right we see the route that the incoming brigade boats followed when they left Fort Alexandria.
The brigaders left their horses at Fort Alexandria, and proceeded upriver toward Fort George, at the junction of the Thle-et-le (Nechako) and Fraser River.
It was slow work north of Fort Alexandria, rowing or poling their boats north against the heavy flow of the river.
But this part of the Fraser River had few hazards for the fur traders -- the Clayey Rapids (now Cottonwood Canyon) was never a major hurdle.
The only real difficulty they had in this part of the river was the canyon and rapids to the south of Fort George.
This was called the Fort George Canyon.
In the winter of 1835-6, Edward Linton and family set out from Fort George for Chilcotin post to the south, and disappeared.
No one knew what had happened, and it was assumed they lost their lives in the Fort George Canyon.
Only the dog survived to return to Fort George. 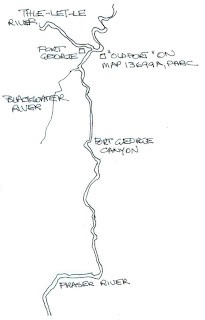 Fort Alexandria is marked on the bottom of the map at the top of the page.
Note Deserters Creek, upriver from Fort Alexandria.
There were always problems with deserters in the fur trade -- especially in New Caledonia -- and it is possible that the name of this creek came from the fur trade.
The word 'Liard' meant cottonwood, in the French Canadian language -- hence Cottonwood River flows into modern-day Cottonwood Canyon.
Anderson knew Cottonwood Canyon as Clayey Rapids.

On the map to the right you will see that on his map CM/13699A, PABC, Anderson marked the location of the 'Old Post'on the east bank of the Fraser River.
As far as historians know, Fort George always stood in the same location on the west bank of the Fraser River, and believe this is Anderson's error.
I have not been able to discover what might have stood here to show why Anderson thought an old fort stood here.
Anderson first passed through Fort George with Ogden's incoming brigade in Fall 1835, and returned to the post in January 1836.
He left the New Caledonia district for the first time in 1840.
No Fort George post journals have survived to make their way into the Hudson's Bay archives, so there is no record of the Occurrences at the fort.
Probably (although I have not specifically researched this question) there are no letters or reports that indicate Fort George changed its location.
Perhaps the remains of an earlier fort stood here.

Anderson spent a little time at Fort George before he left New Caledonia in 1840.
He had handed over the charge of Fraser's Lake post to the new clerk-in-charge, and travelled to Fort George on Chief Factor Peter Skene Ogden's orders.
In winter 1835-6 Anderson had travelled north up the Fraser River to Tete Jaune Cache to pick up the territory's leather supplies, and barely survived the journey.
In 1840 Ogden again ordered him to make the same journey to Tete Jaune Cache.
In December 1840, Ogden cancelled those orders; and Anderson travelled north to Stuart's Lake by a route new to the men of the Hudson's Bay Company.
In his History of the Northern Interior of British Columbia, A.G. Morice quotes from the post journals: "Anderson arrived from Fort George today. He did not come by Nantlais (Natleh or Fraser Lake) but by Nakasley (Na'kaztli or Stuart) River, a far shorter route, and one we shall in future follow -- a great saving of time and provisions."
Obviously, the Hudson's Bay Company men had fallen into the habit of travelling over the few familiar trails between their forts, forgetting the river trails that had once been well known to the early explorers of the North West Company.
This was Alexander Caulfield Anderson's first recorded exploration; it would not be his last.
Posted by Nancy Marguerite Anderson at 9:57 AM