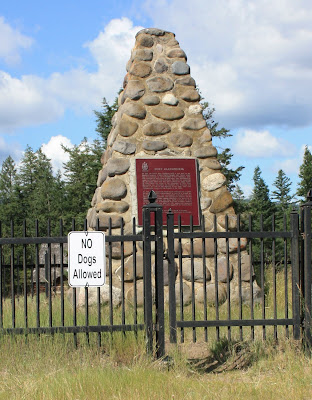 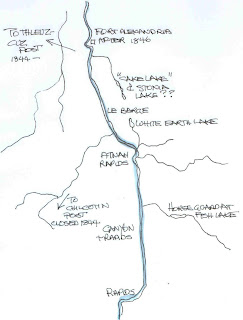 To our left is the map of the area that surrounded Fort Alexandria, as Alexander Caulfield Anderson knew it.
When Anderson first came to Fort Alexandria in 1835, the old fort was situated across the river from the location in which I now show it.
When he re-entered the territory to take over the charge of Fort Alexandria, it was still located on the west side of the river.
There were two possible reasons for the removal of the fort in January 1846:
Firstly, the old fort was so close to the river banks that it had often been flooded in the spring freshets and was rotten and falling apart; these forts needed constant maintenance and rebuilding.
It was probable that another spring freshet caused Anderson to make the decision to move the fort.
But another reason would have been that the fort was threatened by an enormous landslide that completely destroyed the village that belonged to the Home Guard natives who lived in the immediate area.
The natives that always lived near a Hudson's Bay post were called, by the Hudson's Bay men, the "Home Guard Indians."
I have indicated the probable locations of Stonia Lake and Cake Lake, near the fort.
A great deal of agriculture happened around Stonia Lake, and it is often mentioned in the post journals.
However, Cake Lake's name came by accident, when James -- Alexander Anderson's eldest boy -- lost his cakes in the lake.
I can't imagine what these cakes were made of, but they were not cakes as we now know them.
If anyone has a recipe of some sort for these cakes, please let me know what it is.
Interestingly, we have from Alexander Caulfield Anderson's writing a recipe for roasted tiger lilly -- often eaten by the natives around this place. 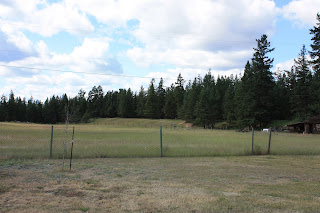 The shot at the top of the page shows the cairn that now marks the location of Fort Alexandria -- although the fort never stood on that spot but to the west (behind) the cairn and closer to the banks of the Fraser River.
To the left we have a view of the grasslands looking in the probable direction of the place the fort once stood.
Nothing remains of the old fort today.

In the early 1860's, Anderson wrote of Fort Alexandria, in his unpublished essay, British Columbia:
"I have talked, however, of a thing that was. All, I am informed, has since been suffered to fall into decay; and the little farm on which I used to pride myself has passed away; the kine, and even the very cocks and hens, have vanished; and if the mill remains it must be as the mere ghost of its former imperfect self -- a sad memento of the past."
Anderson described the mill that had once existed at Fort Alexandria -- the first mill in the New Caledonia district. 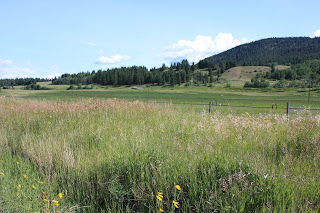 "To grind our wheat we had a small portable mill, with stones two feet in diameter. This mill of American manufacture was bought at Fort Vancouver on the Columbia, taken up the Columbia by water to Okinagan, and thence packed on horse-back piece-meal to its destination. The mill itself was well made and efficient, but the driving gear, constructed at Alexandria, was a marvelous piece of workmanship. In those days of make-shifts, and dove-tailing of means and appliances, to turn a Canadian voyageur into a mill-wright was nothing. Hence our mill, of which by the way we were very proud, rumbled round in a most eccentric manner. It did its work, though, but with a wondrous strain upon the poor horses who tugged the unwieldy machine around. The flour thus produced was of excellent quality; and tasted all the sweeter, I doubt not, as the result of our own exertions." 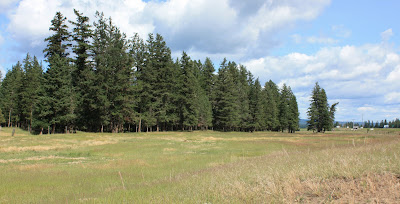 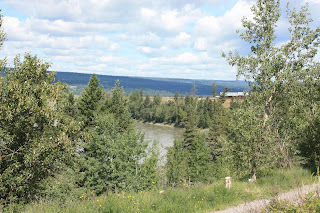 The barn in the photo to the left might stand more or less where the new Fort Alexandria stood, on the top of the point of land that projected out into the Fraser River.
It is probable, however, that the fort more stood to the west, or left side, of the photograph.
These two final photographs were taken from the south of the location where the cairn now stands, looking north toward the point of land on which Fort Alexandria stood.


This is the view that the incoming brigades would have enjoyed as they approached Fort Alexandria.
I understand the horses knew where they were, and often galloped their last few miles into the fort grounds. 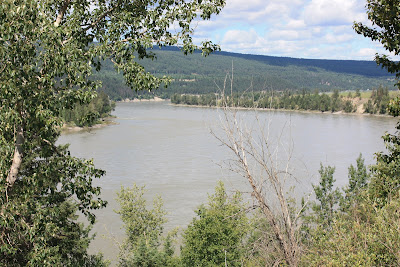 Posted by Nancy Marguerite Anderson at 7:27 AM