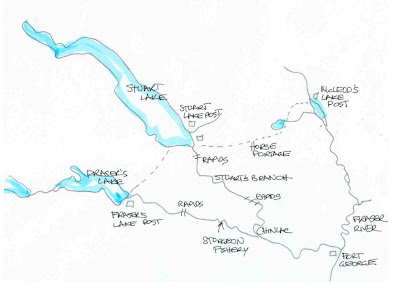 In 1836, when Anderson took charge of the post at Fraser's Lake, the Hudson's Bay Company forts in this territory still bore the names of the North West Company explorers who had opened up New Caledonia to the fur trade thirty years earlier.
Both the Fraser's Lake post, and Fraser River itself, had taken their names from Simon Fraser, and Stuart's Lake from Fraser's clerk, John Stuart.
Anderson had met Simon Fraser at Lachine House, and John Stuart at Red River.
Although Simon Fraser's journals remained unpublished until after Anderson's death in 1884, Anderson had an opportunity to read Simon Fraser's original handwritten journals.
In 1876, when historian H.H. Bancroft arrived at Victoria to collect the stories told by the old Hudson's Bay men, Simon Fraser's journals were in the hands of Anderson's close friend, Dr. Israel Wood Powell.

Bancroft made a copy of Simon Fraser's journal, but he did not collect the story that follows:
In 1821, when the North West Company merged with the Hudson's Bay Company under the latter company's name, John McDonell was the North West Company men then in charge of Fraser's Lake.
In 1828, McDonell made a cross country journey southward, to a native village on a river he called "Salmon River."
That river's modern name is Dean River, and it flows west to enter the eastern end of Dean Channel near Kimsquit, B.C.

This is not an important story, though all stories are important to someone.
As far as I know the exploration is not mentioned in any correspondence that survives in the Hudson's Bay archives, and the Fraser Lake post journals for 1828 have been lost.
The story of McDonell's exploration would have been lost, too, except for one thing.
The track of McDonell's exploration was recorded on one of Alexander Caulfield Anderson's maps.


When Anderson reached his new posting at Fraser's Lake in March 1836, he did one of two things:
Either Anderson read the post journals that remained there, including that of 1828; or he copied the map of the territory that had been left for his use.
Anderson recorded McDonell's exploration on his own map of the territory, and carried that map away with him when he left Fraser's Lake.
Thirty years later, Anderson looked over the maps which he had drawn over the years, and transferred all their stories onto his 1867 map of British Columbia.
Posted by Nancy Marguerite Anderson at 6:49 AM