The Hudson's Bay Company boats west of the Rocky Mountains 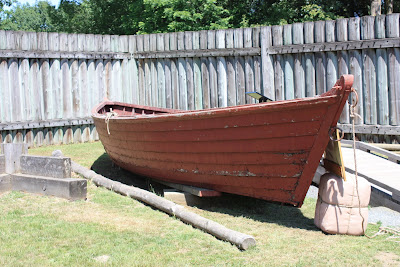 This Hudson's Bay Company boat, used by the fur traders on the Fraser River at Fort Langley, is on display at the Fort Langley National Park site in the village of Fort Langley, British Columbia.
This boat is similar to the boats used to transport the brigade men from Fraser's or Stuart's Lake south in the spring, and bring the incoming express-men home in the late summer.
The boats carried the passengers and furs gathered over the winter south, from Stuart's Lake and Fort George.
The boats were stored in Fort Alexandria hay-sheds over the summer, to protect them from damage from the sun.
When the incoming brigades returned on horseback to Fort Alexandia in late summer, they left the horses to graze on the grasses that surrounded Fort Alexandria, and departed for Fort George and Stuart's Lake in the boats they had stored over the summer.
Before they left Fort Alexandria, they had to ensure that the clinker-built boats were watertight.
To do this, the men turned the boats bottom-up and gummed the gapping seams with a mixture of resin and tallow.
Then, with burning sticks of wood taken out of the fire, they melted the resin and tallow into the seams of the boat.
Anderson's oldest son, James, was quite alarmed when he saw the voyageurs apparently trying to set fire to the boat.
In his Memoirs, he writes: "During the afternoon I witnessed for the first time, the removing of all extraneous matter, splinters, etc., by fire much to my consternation believeing that our crews were veritably burning their boats behind them."
When Anderson entered the New Caledonia district in 1835, there were no boats in this district.
The fur traders travelled the rivers between the posts in birchbark canoes.
Peter Skene Ogden changed all that, and began to build boats similar to those used for many years on the Columbia River between Boat Encampment and Fort Vancouver.
When Alexander Anderson took over the Stuart's Lake post for a few months in late winter 1843, Chief Factor P. S. Ogden instructed him to supervise the building of six new boats for the brigade.
The boats that Anderson's men now built were not the first boats in the New Caledonia district, but they were among the first.
On March 13, the weather remained too cold to bend the ribs, but three men prepared the keels for two boats and one made rivets with a lathe.
By March 15 the weather moderated, and the employees bent the ribs with the aid of a steam-box.
By March 18 they had bent enough ribs for six boats, on March 22 they turned one boat and readied it for putting on the boards.
By April 1 the boatbuilders had their third boat ready for planking, and on April 4 they planked and finished three boats.
But they had not cut enough wood to complete more than four boats, and no time remained to obtain more supplies.
Posted by Nancy Marguerite Anderson at 12:52 PM