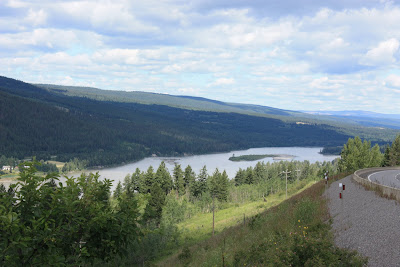 When I took this photograph, I forgot to write down its location -- it is either the west end of Williams Lake, or more likely a view of the Fraser River south of Fort Alexandria.
I hope a local reads this and can identify for me where this photograph was taken.

To the right is the map of New Caledonia, still considered by the fur traders to be part of the Columbia District though it was a thousand miles north of Fort Vancouver.
The southernmost post in New Caledonia was Fort Alexandria, where Anderson served for six years .
Fort Alexandria stood two hundred miles north of the Thompson's River district, later known as Kamloops.
To the north of Fort Alexandria was Fort George -- where the modern-day city of Prince George stands.
North and west of Fort George was the headquarters of New Caledonia at Stuart's Lake, later known as Fort St. James -- and Fraser's Lake, where Anderson had his first New Caledonia posting in 1835-1840.

New Caledonia was sometimes called the 'Siberia of the Fur Trade.'
It was named by the fur traders of the North West Company -- Simon Fraser and John Stuart -- who entered the territory in 1805.

The map to the left shows the last few miles of the brigade trail between Fish Lake (Williams Lake) to Fort Alexandria.
Modern day McLeese Lake bore a different name in those days -- it was called White Earth Lake.
The first rapids south of Fort Alexandria occurred at the mouth of Riviere a Joseph (Soda Creek), and were called the Atnah Rapids.
It is at this point that the native tribes naturally separated themselves into the Ta-Cully or Carrier tribes that surrounded Fort Alexandria, and the Secwepemc people who inhabited the massive area all the way to Kamloops.
It did not matter what the Secwepemc (Shuswap) people called themselves -- at Fort Alexandria they were known only by the Ta-Cully word for stranger, 'Atnah.' 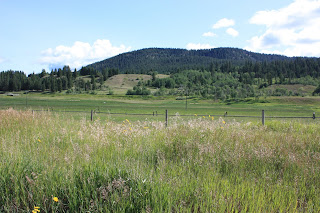 Fort Alexandria was always important for the crops it grew.
At the end of summer 1843, the Hudson's Bay men knew that this year, they would not suffer from a shortage of food, as they often did.
Of the poor seed planted in the spring, they harvested 500 bushels of wheat, enough for their own general use and some to take out with the brigade the following spring.
There were also 40 cartloads of barley, 12 of oats, 660 bushels of potatoes, and 300 kegs of turnips.

In his unpublished manuscript British Columbia (PABC), Anderson wrote of Fort Alexandria:
"As the best criterion of the productive powers of British Columbia I will cite some of the statistics of the Hudson's Bay Company farm attached to the Post of Alexandria, conducted under my own supervision for six years succeeding 1842. Wheat, barley and oats were sown, in the order mentioned, as fast as the ground was prepared; fall-wheat having of course been sown the preceding Autumn. Immediately following, potatoes were planted, generally about the beginning of May. Late in June or early in July refreshing thunder-showers lasting sometimes at intervals for a week or ten days, afforded a favorable opportunity for sowing turnips, which the heat afterwards brought on with great rapidity. The remainder of the time, till the commencement of harvest, was occupied in attending to the gardens and green crops, and laying in a stock of hay for the winter. Fall-wheat was less to be depended upon than the spring variety, for the reason that, if frost came on before the fall of snow the expansion of the surface soil was apt to unroot the growing grain. The crops secured during the years I have mentioned were invariably good. I have witnessed forty bushels of the finest spring wheat thrashed from the product of a measured acre (Canadian) of sixty six yards square. The yield of Barley was invariably heavy; that of Oats good, considering the inferior variety we cultivated. All the culinary vegetables throve well. We had in 1847 twenty six milch cows; and in the spring of 1848, when the writer was removed to the charge of Colvile District on the Columbia, ninety head of cattle, counting the increase of that year, remained upon the farm. Fowls, turkeys, and pigeons completed the live stock. Swine, albeit in many parts a most profitable stock, were not raised in large numbers, on account of the trouble attending them when ranging at large. A few were raised in styes for a while, but the breed eventually was lost."
A footnote on the back of another page tells a little more about the pigs -- "It was an abominable breed -- lank, long-legged, and with a snout like a ploughshare, I did not fret much when I saw the last of them disappear."
As you can see, the fur trade is about much more than just the trading of furs.
The photograph at the bottom of the page is of the point of land on which Fort Alexandria stood after 1844.
Though the fort was built on the east side of the river in 1821, it was moved to the Fraser's west side about 1836.
When Anderson entered New Caledonia in 1835, the fort stood on the west bank of the Fraser River.
In early 1846, Anderson gave orders to move the fort from the west bank of the Fraser River, to the top of the point of land high above the waters of the Fraser River.
It is admittedly hard to distinguish, but the Fraser River curves around the high-banked point of land in the middle of the photograph.
Today this beautiful piece of land is owned by the descendents of the natives who lived around Fort Alexandria. 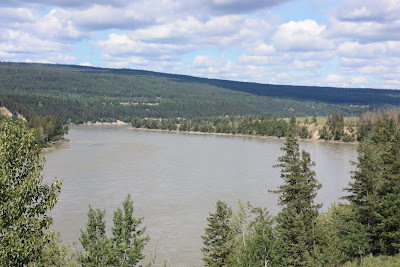